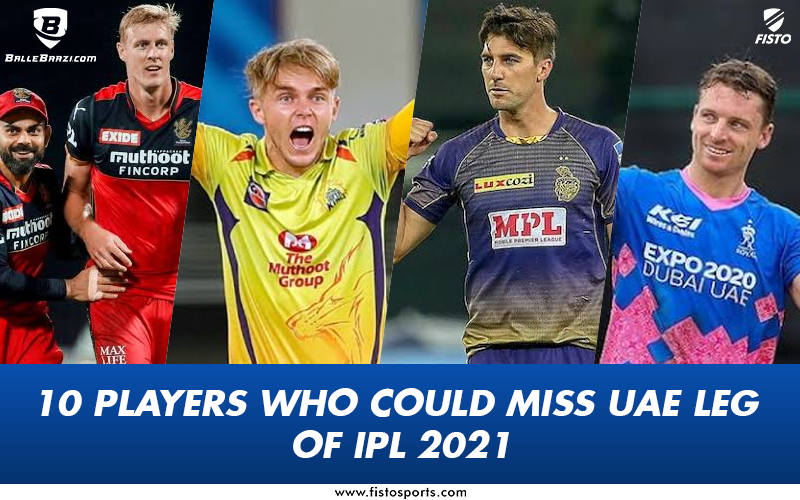 There are quite a few high-profile players who will be missing from the action as the second phase of IPL in UAE will clash with many fixtures in international cricket.

India has suffered a huge blow from the second wave of the pandemic with a lot of people losing their loved ones to losing their livelihood. In such times players contracted the deadly pathogen and BCCI decided to stop the ongoing IPL tournament and have decided to move it back to UAE.

With a lot of international fixtures clashing around the schedule, we could see a lot of key players missing from the foray. We will look into the important players who could potentially miss IPL in UAE across all franchises.

Jos Butler is the anchor for Rajasthan Royals, with the departure of Stokes, he is the trump card for the franchise. He amassed 254 runs with an impressive average of 37, and a strike rate of 154. England Cricket Board has announced that due to their busy scheduling and the upcoming T20 World Cup, England players will not be a part of the UAE IPL. Jos was in red-hot form scoring a century against Sunrisers Hyderabad. His absence could further dent the RR hopes to lift the title.

Pat Cummins is easily the best player for Kolkata Knight Riders from a country mile. He is one of their premium bowlers and even the best batsmen after the knock against CSK. He has taken 9 wickets and averages an above-average 31 with the bat. Currently muddling at 7th place the absence of their premium all-rounder will make it hard for KKR to reach the play-offs.

Moeen Ali & @CurranSM in the Chennai side. @Eoin16 leading Kolkata.

Pundits predicted a bad finish for Chennai Super Kings in this year’s IPL, and Moeen has boosted them into the top half of the table with his performance. He added in the machinery of the team easily and executing his job of increasing the tempo for the team. His strike rate at 158 at an average of 35 proved to be the enigma CSK lacked in the previous edition. He contributed with the ball as well by picking out crucial wickets at important junctures.

Pollard is a vital cog that helps run Mumbi Indians to get crucial victories. The Caribbean Premier League is scheduled to take place in  August and September followed by a trilateral series. So, the availability of Windies players will be a huge doubt. Pollard single-handedly took MI over the line against their arch-nemesis CSK with a blistering knock. He is a key all-rounder who could provide important breaks and is a massive presence in the field.

Delhi Capitals sits comfortably at the top of the table, courtesy of good knocks from their openers and some tight bowling from Indian pacers. Steve Smith hasn’t produced a lighting knock for DC similar to Stoinis but plays the anchor role perfectly. Delhi has a middle-order problem which is Smith’s cup of tea. His absence can slow down the run rate in the middle overs which could hurt them.

Rashid easily fits into the top-5 bowlers to emerge from IPL. He innovates himself in every series and makes life difficult for the batsmen. Rashid Khan has consistently picked up more than 10 wickets in the last 5 years with an economy rate below 7 which is an astonishing feat. He is the go-to man for Sunrisers Hyderabad in time of crisis and his absence will create a huge vacuum in the already depleted side.

Maxwell has been the lucky charm for Royal Challengers Bangalore this season with consistent knocks at crucial times taking the pressure away from AB de Villiers and Virat Kohli. He fitted perfectly from the go and produced vital contributions. RCB’s fragile batting will once again depend on Kohli and ABD in his absence.

RCB’s expensive bowling signing will not be available due to his international duties. Although he didn’t make an instant upsurge like Maxwell, he was able to trouble batsmen with his bounce and movement in the powerplay.

“Chutty Kuzhandhai” as fondly called by CSK fans, Sam Curran has been a revelation with bat and ball. His numbers are out of this world to put it into perspective, he picks scores at an average of 24 with the Strike Rate on the excess of 160. Curran also picks up 10+ wickets for 3 consecutive years and has been a good fielder as well. His leave will be felt greatly by CSK.

Kane Williamson is the crux of the Sunrisers Hyderabad franchise and has been nominated to captaincy recently. He is a calm and composed player who could steer the team effectively. After sacking Warner from captaincy SRH will struggle hard in the remaining games.