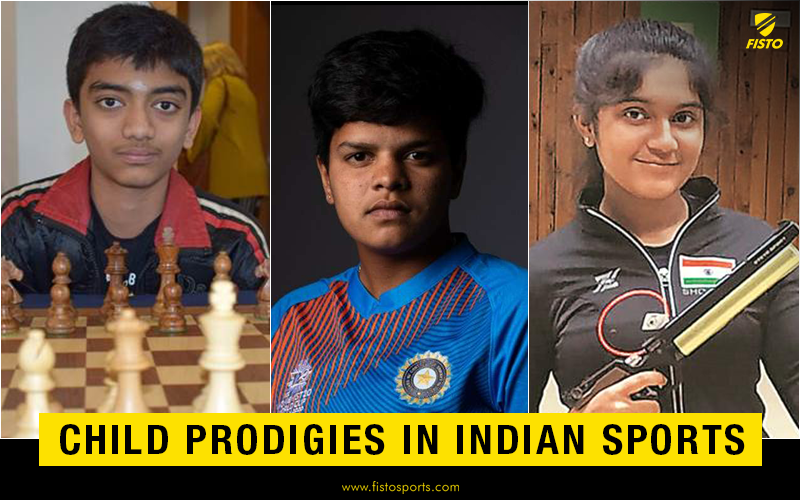 15 child prodigies in Indian sports at the moment

While most of the kids are probably squeezed into routines of schoolings in the day and cartoons in the night, there are few children to have set on a wild adventure to make achievements, win laurels and etch their names in the books of record before even finding them  in the registers of the school.

These children, are the true honors and the future of the county. While there are many such who have made incredible achievements. Here’s a list of the current child prodigies, in the field of sports, who have surpassed various marks in the recent times. Open water swimming is not a sport that is profound in India owing to the high risk involved. The 16-year-old Gaurvi Singhvi hailing from Udaipur has become the World’s youngest Open water swimmer to swim over the English Channel in 13 hours and 26 minutes. She has also swam over 47 kilometers in the Indian Ocean, in 9 hours 22 minutes and emerged the youngest to do so. RameshBabu Praggnandhaa, is another youngster who astounded the world with his brilliancy in the game at a very young age. Pragganandhaa who became the Grand Master in 2018 when he was 12 years, 10 months and 19 days old, was the then second youngest to have touched the milestone, before his record was taken over by Gukesh and Javokhir Sindarov which leaves him the fourth on the list. He also created history by becoming the youngest International Master in 2016. The youngster is also the second youngest to cross the 2600 Elo mark. Nihal Sarin who is 15 years of age, is another Chess prodigy from India in recent times. The youngster who became the Grandmaster at 14 years of age, though not amongst the list of youngest to have reached there, has become third youngest player in history to cross the Elo rating mark of 2600 which he achieved when he was 14. Abhinav G at seven, has pedaled 81.7 Kms non-stop, from Kalakpet in Pondicherry to Mahabalipuram in 3 hours and 32 minutes , which was the longest ride to have taken by a child on a bicycle. He found his name at the Indian and the Asian books of records for the achievement. Abinav has also participated in “Cyclotsava, the longest single Line Bicycle Parade. Golom Tinku, hailing from Arunachal Pradesh who  has just crept on his early teens has lifted 215Kg at the 55Kg category in the National Weightlifting Championship ad marked a World Record. He earned the accolades of many for his prodigious achievement. Esha Singh, the 14-year- old Shooter, on bagging silver, at the ISSF Junior (U-21) World Cup has become the Youngest Indian to hang a World Cup medal around her neck. The youngster has already proved an eye turner on winning the National Championship. Manas Dhamne, the 11-year-old star had won title at the U-12 Eddie Herr International Tournament which is a very important tournament at the Junior circuits as is considered as one of the Grand slams at the Junior circuit. He is the only Indian to have achieved the feet. He was also amongst the finalists at the Doubles. Hansini Madhan from Chennai, who is ten years of age, has bagged her first International medal by bagging Bronze at the Swedish Junior and Cadet Open at Sweden. She has secured the medal at her first ever appearance at the International level. At just five years of age, Aasman Taneja has made terrific performances to mark his name at the Guinness World Records in Taekwondo for delivering 1200 Knee strikes, Non-stop in an hour. He has also won silver at the World Open previously. Chithresh Tatha, alike the most of the kids his age, had it all sorted by the age of 8 when he made the call of spending more of his life and adding on more to it, in the water. Back in 2014, when he was 12 years of age, he astonished the world by becoming the youngest sailor from India, at the Asian Games in 2014. In 2019, he participate at the Asian games and still he is the youngest from India to participate. Shaili Singh at just 15 years of age, has already been considered the next Anju Bobby George. She set a National record at the Junior Nationals in Ranchi, which she broke the following year.  Her record places her the 19th in the world at the U-18 rankings. She crowned her record by bettering the qualifying mark for the 2020 IAAF World U-20 Championships. Richa Gosh the sixteen-year-old All-rounder, who holds an incredible record at the domestic circuit, was also a part of the T20 World Cup Squad. She was also named in the Women’s Tri-Nation series.