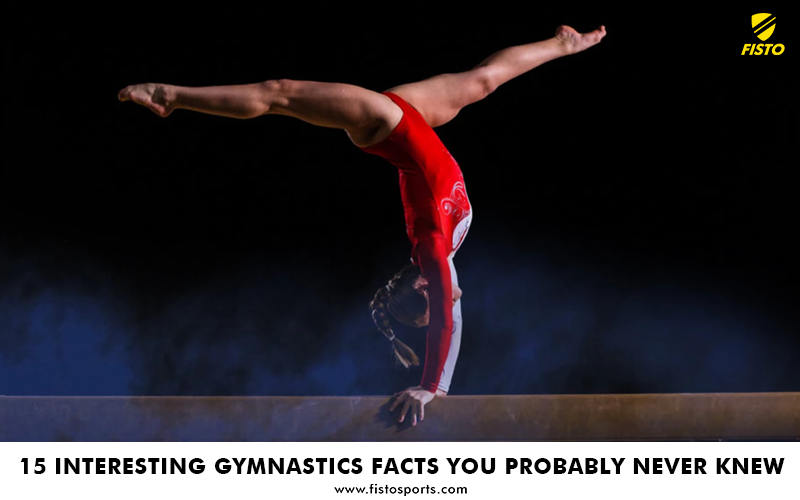 The history of gymnastics has as many highs and lows as an uneven bars routine; while there is a long tradition of glory, grace, power, and triumph. The many sides of the sport are part of what makes it so fascinating, and read on to find out more about this unusual athletic practice and other fascinating facts about gymnastics.

1 ) The word gymnastics has come from a Greek word ‘gymnazein’ which actually means, ‘exercise naked’.

2 ) Five teams competed in the first ever gymnastics event in the Olympics of 1896. Germany won most of the medals.

3 ) The first ever non Olympic gymnastic event was  held in Antwerp, Belgium in the year 1903 and is considered as the World Championships of Gymnastics.

4 ) Gymnastics events in the Olympics for women were included in the 1928 games.

6 ) The first perfect 10 scores of modern Olympic gymnastics were awarded to Nadia Comăneci of Romania and Nellie Kim of the Soviet Union in 1976, at the Summer Olympics in Montreal, Canada. Comăneci was only 14 years old and scored seven perfect 10s, while Kim, who was 19, received three perfect 10s. Somewhat bizarrely, in the 1924 Olympics in Paris, 23 men scored a perfect 10 in rope climbing - an event that was later discontinued. The historic Olympic gymnastics events were vastly different from today's in terms of the disciplines.

7 ) USSR’s Larissa Latynina is the most successful women gymnast in the history of the Olympics as she won 18 medals between 1956 and 1964.

8 ) George Eyser of the USA won 6 medals in the 1904 Olympics and is considered as the most remarkable gymnast in history as he had won them with a wooden leg.

9) In April 1994 Australia’s Brisbane city hosted the individual World Gymnastic Championships which created history as it was the first time that it was held outside Europe in 100 years!

10) Studies show that most major gymnasts start their careers at the age of two! A study by the University of Minnesota states that as the average age of an female Olympic gymnast is 16, a young athlete must begin at a very young age if they want to become an elite gymnast. In order to develop strength and skills and maximise training, a gymnast should start training at pre-school age. Kids aged between two and five, who begin gymnastics, will develop fundamental movement skills and gain confidence.

11 ) A study by sports blog site Total Sportek ranked gymnastics as the fourth hardest sport in the world, behind rugby, MMA and boxing. The international elite of gymnasts competing at events such as the Olympic Games and world championships, are performing increasingly difficult routines that require them to have more power and speed to keep pace and triumph over their rivals.

12 ) Any youngster who aspires to become a world-class gymnast must be prepared to devote between 20 and 30 hours each week to training - almost the equivalent of having a full-time job. A potential Olympic gymnast must have outstanding abilities and physical skills by the age of 10 in order to pursue gymnastics as a career and this will be achieved only with intense training.

13 ) The usual attire today for gymnasts today is made of tight-fitting lycra, which is comfortable and permits easy movement. Female competitors normally wear a leotard - a garment named after the French acrobat and trapeze artist Jules Leotard, who was born in 1842. He didn't invent the garment, but he made it popular while performing with the Cirque Napoleon. Leotards evolved over the years, from the baggy and unflattering garments worn by female gymnasts in the 1930s and '40s.

Gymnastics has evolved over the past several decades, and the changes have carried over to the sport’s preferred body type.  Dvora Meyers’ in his book, The End of the Perfect 10: The Making and Breaking of Gymnastics’ Top Score—from Nadia to Now lays out an engaging explanation for how various factors, from changing gender roles to the scoring system, have come into play, and the end result is telling: The average height of elite female gymnasts has dropped from 5-foot-3 to 4-foot-9 in the last 30 years, according to David Epstein, author of The Sports Gene.

15 ) The Soviet Union holds the most Olympic medals in gymnastics

'Gymnastics' scoring system must be enhanced to make it easier for spectators to understand,' says FIG President Morinari Watanabe

Dare to dream and be determined to deliver, a mantra gymnast Rashika Chauhan lives by

Vaidehi Dewoolkar: “Gymnastics taught me qualities that I'll carry for the rest of my life”

Who was the first Indian ever to Judge Gymnastics at Olympic Games?