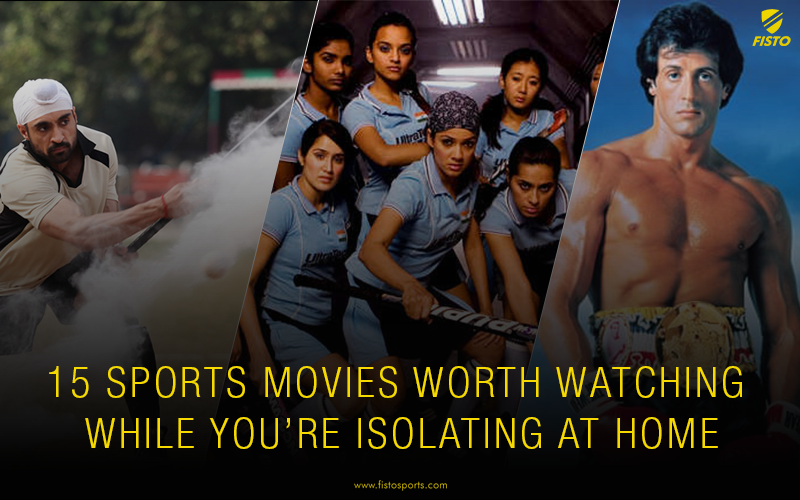 With coronavirus wrecking the sports calendar, Fisto Sports takes you to the movies of sport.

Trapped inside the doors, deprived of the savor of daily dose of sports, the life of a sporting fan has turned dry as a dust, with no nail-biting game to numb the mind over and no performance blows to rant all day over.

While driving through this irksome season of sporting drought, with nothing much left to do and no place safe to go, here’s a list of the sporting movies to seek solace in, at the comfort of your couch,

The documentary that brings to light, the struggle the Aussies as a team faced  to rebuild their reputation and pride, post the ball tampering scandal is a real inspiration that would make one love the men in Yellow despite the natural despise they are bound by. The documentary shows the rough waters the Aussies we know as fighters, navigated through, to become the best cricketing Nation again. The docu-series narrated by Justin Langer is a tale of recovery from ashes and one such that will definitely urge one to.

The movie based on the true story of Daniel “Rudy” Ruettiger’s aim to play football for Notre Dam is one such movie that drives one off to fight for their  dreams and refuse to give up no matter what. The plot revolves around the lead, who chases his one dream of playing for the college team undeterred by the numerous challenges thrown up at him. The fable of perseverance, of the 17 year old despite being knocked-out is a true inspiration.

The five movie series, Rocky is the life story of Rocky Balboa is a rags to riches tale of Rocky who was a small time club-boxer. Predominantly knocked down as ‘Bum’ by his close associates, he finds his purpose and a stage to prove himself when he gets an opportunity to fight Apollo Creed, the World Heavyweight Champion Boxer. Rocky capitalizes on the opportunity and fights to earn back respect.

PELE, THE BIRTH OF A LEGEND

Pele is the biography of Pele, the Brazilian Footballer, who played football in the “Ginga style”. The movie shows the transition of Dico to Pele who started his journey with the sport after unearthing his Football skills at a local football tournament which earned him a place at a professional soccer club. His unorthodox style of playing rises speculations amongst many but he slams every critic with results and goes on to win a World Cup for Brazil. The biopic of a legendary is a mastery.

MUHAMMAD ALI: WHEN WE WERE KINGS

The documentary When we were kings, centers the 1974 heavy weight Championship match in Zaire between Muhammad Ali, who was an underdog in comparison to his opponent George Foreman, which was even dubbed as “Rumble in the Jungle”. The documentary that was made for two decades, was not just about the fight, but it also depicts the African-American culture and how the legendary stood stalwart of perseverance, determination and pride.

The exquisite movie, is about an aspiring boxer Maggie Fitzgerald who yearns to learn the sport from Frankie Dunn, one of the best trainers. Tahough he initially refuses to train a women, rom the gradually he gives in on being impressed by the tenacity of Maggie and on being walked out by one of his students. His lonely soul, on being abandoned by his only daughter, sought refuge in Maggie’s devotion towards him and the sport and she also became a friend who filled the void. The film apart from boxing, stands out to be one of the best stories that depict the relationship between the coach and a student.

The film Miracle, is the victory story of the United States Men’s Hockey team that won Gold at the 1980 Winter Olympics. The movie tells the story from the lens of the coach Herb Brooks who was a player turned coach. Brooks who opts a new team of nascent players rather than the team filled in Veterans given to him, finds it a tough roe to hoe to sail the team through the diversities amongst the players and train them to face the powerhouse opposition they will be taking on head at the Olympics. The movie that shows the miraculous event is a true miracle indeed.

Chak-De India is a Hindi movie that is partially based on Miracle. It is based on the India Women’s Hockey team and the movie portrays the sport, backed up the efforts of the coach Kabir Khan to have bound the women despite their differences and it also strikes a touch on the Feminism aspect,  that is prevalent in the country. The movie isn’t just about the sport but it also takes a hit on social injustice and reflects the stereotypical cultural traits found.

Soorma that precisely translates to Warrior, is a film based on the life of Sandeep Sharma. Sandeep Sharma who quits Hockey as a young boy who could not put up with the casualty of a tough coach comes in contact with the game for the second time to win the girl he lost his heart to. This time, the sport took him to great heights and he made it into the higher levels of the sport. It was then that he faced a massive injury paralyzing him in a wheelchair, the story of him fighting back through his toughest times and making his appearance at the International level is a a true inspiration.

Bhaag Milkha Bhaag, is the biography of Milka Singh an Athlete, who was a National Champion runner and an Olympian. Coming in association with the sport by accident, followed by a series of trauma and a series of mistakes committed, he learns life from the sport and gives back to it.

Mary Kom, is a biography of the “Maginifinet Mary”. The six time World Champion who went on to live her passion despite all the disapprovals she countered initially. Driven by a fierce passion for the sport, she fights every obstacle including her father who did not give heed to her passion. The movie also talks about the sporting scenario in India.

M.S.Dhoni the movie about the India’s favorite sporting star is the biography of M.S.Dhoni, a sporting great  from Ranchi. The movie shows the number of dejections and adversity he underwent before becoming the Coolest captain who comes up with mind blogging tactics to counter every situation. The movie takes a tour on the tough lane travelled by him with nothing but hopes and passion.

The documentary on the life of Sachin Tendulkar, that carries clippings of his early life narrated by him is an absolute feast to the eyes of Indians who refer to him as the God of the God sent sport. The documentary featuring his early life and transition into God with incidents from his personal life and the people who helped him reach greatness is a story every cricketing fan would like to know.

Hoop Dreams is a documentary of two African-America teenagers, who were recruited a by a scout that was predominantly filled in with whites. The documentary shows the struggles  encountered by them a questions the fairness of a number of issues at the United States.

Remember the Titans is a biography based on a true African-American coach Herman Boone.  The film is about two coaches who overcame their racial differences for a bigger purpose. The movie blends sports with the socio-economic differences and helps a town do it.

How Parents Are Keeping Their Kids Active and Entertained

5 THINGS ATHLETES CAN DO DURING THE LOCKDOWN

IPL 2020: Cancel, delay or behind closed doors - How much will it cost the BCCI?

How Indian athletes are training in Coronavirus lockdown