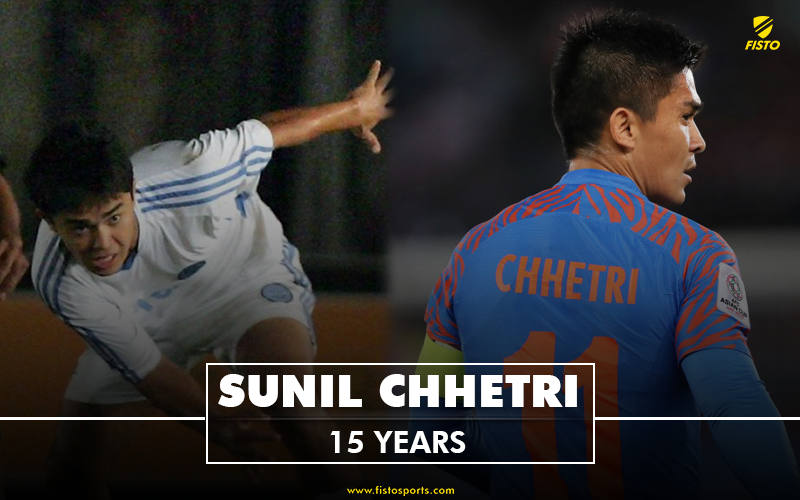 To mark the 15th anniversary of Indian football icon Sunil Chhetri, we dig out twenty facts about the world of 'Captain..Leader..Legend' that not too many might know about.

15 years ago, June 12, 2005, saw the birth of a superstar, as 20-year-old Sunil Chhetri made his International debut against Pakistan in Quetta and a new era was born. And he has gone on to become probably the greatest player in the Indian football history – giving spectacle, winning titles and breaking one record after another.

To celebrate the 15 years of Sunil Chhetri, some need-to-know facts about the poster boy of Indian football.

Also Read: Sunil wasn’t my first option and I had my doubts, recalls Sukhwinder Singh

His mother Sushila Chhetri and his sisters represented Nepal in the national soccer team. Sunil Chhetri’s pic with his sister

Chhetri made his debut for the Blue Tigers in 2005, and played exactly five games. Not bad for the beginning of a great career, was it?

The top scorer for the Indian national team with 72 goals. He’s also the second highest active international goalscorer, only behind Cristiano Ronaldo.

Can anyone from the next generation topple him? Looks unlikely.

Always one to rise to the occasion!

Sunil Chhetri scored his first hat-trick against Tajikistan in 2008, in the prestigious AFC Challenge Cup.

This man has travelled!

Chhetri had played for four top Indian clubs before his first international stint, for Kansas City Wizards in the United States started. The clubs were – Mohun Bagan, JCT, East Bengal and Dempo. Chalk up not only goals

He’s scored the most goals against Chinese Taipei, totaling six in five appearances. Also, he has been awarded the AIFF Footballer of the Year six times in his career till now. No easy feat, right?

Also Read: Eye-opening and unknown Indian sports facts that you might not know

Smooth from the start!

In the prestigious and now rechristened Nehru Cup (rebranded as the Intercontinental Cup), he scored nine times in just fourteen appearances.

Chhetri has played in more than several attacking roles throughout his career, but the No. 10 position hasn’t been his favorite ever. That extra bit of space on the wing or operating near the box excites him!

His jersey number. A hashtag whenever he plays. #SC11

One for the big stage!

Chhetri’s finest year for the national team, in terms of the number of games he played, came in 2011. India played the AFC Asian Cup, the man scored against Bahrain, and in total scored 13 times! A whopping 13 times!

The first taste to national glory came in 2007, when ‘Captain Fantastic’ was 23. India won the Nehru Cup, beating Syria in the final. Chhetri had announced himself in style, scoring four times. In his debut season at the Kanteerava, as Bengaluru FC romped to the I-league title, the man donned the Blues’ jersey 26 times. He had a stunning 15 goals to his name.

With 39 goals in five seasons, Chhetri is the leading Indian goalscorer in the Hero ISL tournament’s history. He wrote history books last year, when he earned ‘Asian Icon’ by the Asian Football Confederation for his contribution to the game. Long awaited!