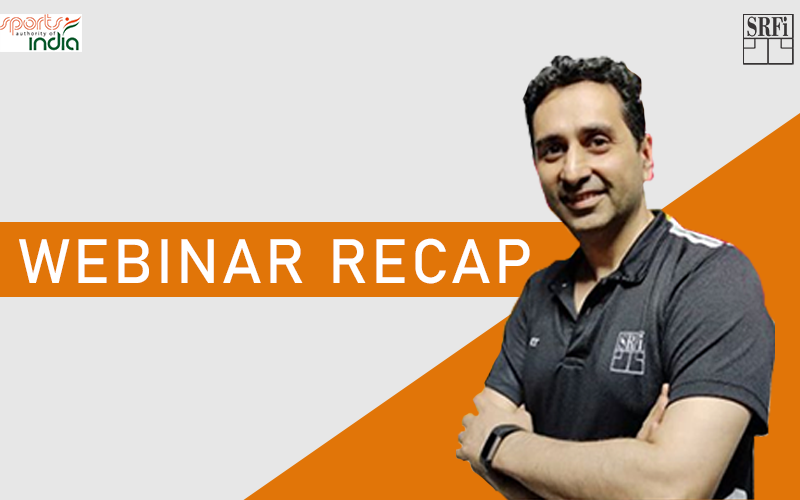 In case you missed SRFI’s 16 online session, take a look at the key takeaways here.

Squash Rackets Federation of India (SRFI) hosted series of online Squash workshop under the banner of Sports Authority of India.

Over the past few weeks, Secretary General of SRFI Cyrus Poncha and his team have been pouring their time and energy into making it an eventful one and they delivered in some style.

According to the organizers, the webinars aimed to promote the discussion about player development, psychology, fitness, nutrition and injury prevention, annual planning, technology and rules of the new National ranking system. They indeed provided an exciting line up with a series of notable speakers from across the sporting spectrum.

There were 16 workshop series overall, which were conceptualized by Cyrus Poncha, former National Coach; currently Secretary General, SRFI for all WSF certified coaches in India.

The following provides a summary of 16 key takeaways from the webinar:

The Long Term Player Development (LTPD) provides an integrated framework to facilitate the development of players at all levels of participation and experience. The model is the player centred, coach driven and supported by administrators. The two discussed the importance of Long-Term Player Development and how it links to coaching squash. They described the seven stages within the basic LTPD model:

Dhiraj, who has 20 years of refereeing experience, mentioned a story seeing Nicol David as a toddler in Malaysia playing with her Rubik’s cube at the courts. The two also discussed on how Saurav Ghosal moved to Chennai for his 4 years of training during his “train to train’ phase.

Roy, who has done extensive research in Emotion in Sports, Psychological skill Training and has worked with SAI in the past, offered tips and strategies to cope with our current working and living lives such as what arousal is in coaching and how it affects performance, informed coaches the techniques for managing stress, explained the importance of levels of arousal and its relationship to performance.

Later, she discusses the psychology of performing under pressure by explaining about the inverted ‘U’ theory, competitive Readiness and Progressive Muscular Relaxation techniques, controlled breathing and Relaxation technique, and imagery and mental rehearsal – visualization.

Read: 'Seeing Squash in the Olympics would be the biggest Game Changer'

Understanding the rules of the game is paramount to achieve victory in any sport. Srikanth, director of referees at The Squash Rackets Federation of India discussed how the game will always have a need for rules.

Srikanth, who has been a WSF referee for over a decade officiating world, Asian and professional (PSA) tour matches and considered a leading referee in the world, briefed about the understanding of the rules of the game. he gave coaches an understanding of the roles of marker and referee.

He also discussed about the new rules of the games showing giving examples for let and stroke situations with match videos during our senior national championships held in February.

Magnesium deficiency are a big issue that is destined to become greater in the coming years. Suhasini, a Nutrionist working with QUA Nutrition in Bengaluru, gave the viewers team plenty of food for thought with lots of info & tips about nutrition and living a healthy lifestyle.

She pointed out how right nutrition helps to enhance the performance of players both during practice and competition. Fuelling the body for performance.

Suhasini, who has worked with top squash players in the country, explained about what is to be eaten before, during and after a session and match.

Chris Ryder, the current England Squash Lead Performance Coach talked through his Match Analysis journeys and his current work with the team.

Chris comes from a professional career in the sport having reached a high of World No. 33 on the PSA World Tour. He brings a wealth of elite experience with in and an eye for fine detail.

One of the areas he specialise in is creating powerful data visualisations of match content, so that the players can get the most out of a huge amount of data collection.

He gave a glimpse of how coaches watched and analysed the 5th games of the 2014 World Championship match between Ramy Ashour vs Mohamed El Shorbagy.

Read: Eye-opening and unknown Indian sports facts that yout might not know

6. Fitness training and testing by Cyrus Poncha and M.Dimple

In this 6th part webinar series, M. Dimple M Dimple, who has over 11 years of experience as a physiotherapist and has been working at the Indian Squash Academy for over 4 years, explains why communication skills are necessary for success in training, what those skills are, and how to use them to your advantage.

With an IOC Diploma in Sports Physical Therapies under her belt, M Dimple has been travelling with both the men’s & women’s squash team for the past few years shed some light on the fitness components of squash, the basic fitness activities. She also discussed the tests done at the Indian squash academy.

In light of the growing challenges injuries pose to athletes, effective warm up and stretching, balanced diet and fluid intake, simple treatment procedures - R.I.C.E solutions are needed now more than ever.

Dalip Tripathi – Senior coach at the Calcutta Racket Club with around 20 years of coaching experience.  He is a certified WSF Level 2 coach.

Dhiraj Singh is the Director of Coaching at The Squash Rackets Federation of India.  With over 20 years of refereeing, he is an ASF certified regional referee officiating many Asian championships.  He recently travelled with the Indian team for the South Asian Games held in Kathmandu in Dec 2019.

The creative process was also a topic of discussion. The lesson plan using the acronym IDEAS and the progressions. They highlighted key issues – Open drills - using cooperation rally when required. Conditioned Game - Progress rally with scoring. Match Play - Include the trained task in a practice match.

The session started with the introduction to the fundamentals of the game, strategy, and later they outlined the basic structure of the game.

Squash, not only physically but mentally too requires tactics and games’ mechanism needed to emerge victorious. The majority of the time, it’s down to your tactics. Somewhere - whether it’s our formation, mentality, instructions or another element of our strategy – we’re going wrong.

The two shared some tactics tips to help you achieve success in the game such as reading the opponent, court conditions (while playing in a climatically “cold” place in Hull, England during British Open Vs humid place like El Gouna at the Women’s El Gouna International, the ball, Good length,  Controlling the “T”,  When to boast, when to take the ball early, volleying, how to use all the four corners of the court, changing the pace of the ball, and watching the ball at all times.

Read: 15 child prodigies in Indian sports at the moment

Clark from USA is currently based in Delhi and works for Sporting Ethos. Clark’s experience in strength and conditioning has been fundamental to Sporting Ethos young athletes being able to take the next step to the ranks.

During the session, Clark talked about integrated fitness and strength and condition for Squash at a national level and stressed it’s need to be improved.

He also commented on the importance of basic understanding of the human anatomy. He discussed the correct methods of executing strength training routines for elite squash players. He further discussed the different exercise routines for each of the phases in a long term plan.

His fresh ideas and subtle changes brought about rapid increase in number of tournaments across the country, increase in players, partners, and sponsors.

Harish bestowed some insightful industry knowledge upon our keen brains in the session, elaborating the many comprehensive of the circuit such as how the circuit has designed and how it helps the entire eco system.

He also explained step-by-step how the points are calculated to generate national rankings, how can a coach assist players to identify the tournament they should participate and the new rules and regulations and reason for changes.

In these trying times, mental health awareness plays a vital role to help people cope with the different impacts of the COVID-19. These were issues the Sumiran, who is a sport psychologist with Sporting Ethos specializes in the mental wellbeing of racket sports athletes including squash tried to address.

She discussed about the principles of goal setting – ‘SMARTER’  Specific (who, what, why, where, when). Measurable (how much, how often, how many). Achievable (Is the goal realistic & reasonable). Relevant (whether significant to future goals & to personality and requirements). Time-Bound (by when will you achieve the goal), Exciting (whether goal is stimulating or motivating enough to progress & achieve) Recorded (progress to be documented for measurement and review).

13. Role of the coach & communication by Mekhala Srivastava and Surbhi Mishra

It's no secret that strength coaches are paramount for the long-term success of an athlete.

Mekhala Srivastava was a National Women’s title holder in 2002.  The Bengaluru based coach and has recently travelled with the Indian team for the South Asian Games held in Kathmandu in Dec 2019.

Surbhi Mishra has been a former player who has represented India at major games and numerous Asian & World Championships. She is a World Squash Federation certified Level 2 Coach.

Both has proven that supporting a student-athletes’ mental wellbeing enhances a winning culture.

Surbhi informed the participants that the position of “coach” is a responsible one that takes into consideration skills development and personal development of the players.

Shaping young-athletes to perform in all aspects of their lives is something Mekhala always strives for. Creating values and a positive culture extends beyond the coaches telling players what to do. Mekhala focuses on the person as a whole.

She stressed that identifying the reason why people play squash is very important to popularise the game. Recognise different coaching styles is also vital.

Later, they discussed on the techniques for coaching juniors – How the coach should relate to parents, Basic Methods of Instruction, communicating with players, Safety in Children's sport, learning what to say, how and when during training, what to say before, during and after matches.

Read: Cyrus Poncha -Now is the time to rest and recover and get stronger

Technology set to change not only the way sport is viewed, adds flavour to the game itself, be it Squash or any other sports. It gives fans an immersive experience.

Harish gave astute news of the software and tools for coaches day today activity and awareness of free and paid software available in market. He also discussed on Google calendar for training program scheduling, Kinovea for video analysis, excel macros and other paid tools for match analysis, excel pivoting functionality for analysis data, ball feeding machine for players to train on drills.

Allan has reflected on both Covid-19 and the long-term direction in preparing an annual plan with emphasis on the meso cycle.

David Palmer, the Australian coach based in Cornell University in USA has an impressive track record both as a player and coach.

As a former World # 1, he was twice World Champion, 9 time medal winner at the CWG which included men’s doubles and mixed doubles. His recent was a gold in the CWG 2018 in the men’s doubles.

In the last session of the workshop, he detailly covered the four areas for elite training athletes - technique, fitness, tactics and mental – the discipline and values provide a real insight to what it is like at the elite level of high performance in Squash.