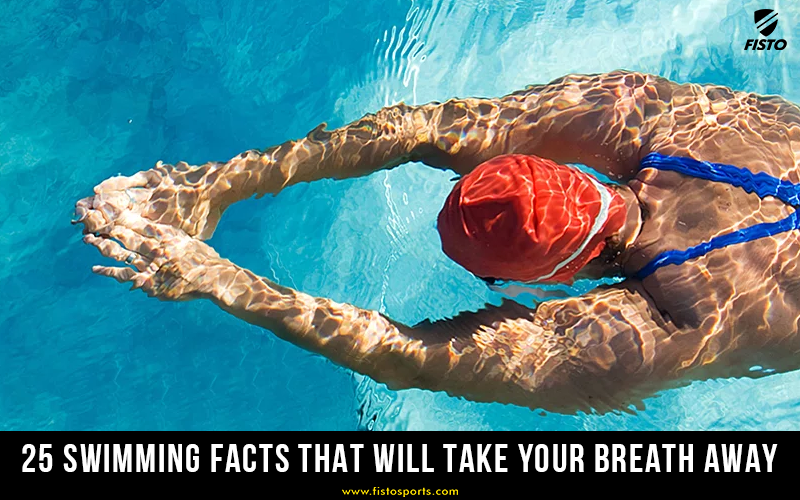 Swimming is some of the most fun you can have in the water!  What’s more, it’s a great way to exercise.  Humans are naturally able to swim, which means we should all take the chance to go for a dip if we can.  But how much do you know about the act of swimming?

Here are some interesting facts we don’t think you’ll have swum up across before!

1) There are 4 recognized swimming strokes

Now #summer has arrived check out #NASS #WednesdayWisdom on how #swimming can help your #ankylosingspondylitis.
Best strokes are front and back crawl. Be cautious of breaststroke and butterflyhttps://t.co/BZml5S0S0u pic.twitter.com/XYrCG7y2Rg

The “stroke” is the style or the way a person maneuvers through the water.

2) The oldest stroke is the breaststroke

Did you know? The Breaststroke is the oldest swimming stroke. Its history goes all the way back to the Stone Age. pic.twitter.com/60DkscpaIP

Swimming is innate. People have been swimming since ancient times. In fact, ancient data shows that we were using the backstroke back when we lived in caves!

3) Butterfly was born from the breaststroke

This video of the 200m Breaststroke from the 1936 Olympic Games is all sorts of confusing.pic.twitter.com/9lFD3iHZbT

Breaststroke is known to be the first and slowest stroke. Breaststrokers in the 1940s began to notice that recovering both arms forward above their heads would allow them to swim faster. Fast forward sixteen years later, butterfly gave its first Olympic appearance in the 1956 Games in Melbourne.

Fun Fact: Swim fins were just one item on the long list of things invented by founding father, Benjamin Franklin. If picturing Ben Franklin doing the goofy, high-stepping swim fin walk down to the water doesn't make you chuckle, we don't know what will. pic.twitter.com/M6cdcmy0ud

We all know Benjamin Franklin was an avid inventor, and you’re probably aware that he invented things like the lightening rod and bifocals.

But did you also know he invented swim fins?  That’s right, when he was just 11 years old, he came up with fins, which are more like many of us know today as swim paddles.  They were worn on his hands to help catch more water and propel himself more with each stroke.

He was also a passionate swimmer overall, on one excursion swimming 3 1/2 miles.  Because of his love and contributions to the sport, he was inducted as an honor contributor in the International Swimming Hall of Fame in 1968.

It’s a question we’ve all asked ourselves. Yes, in fact, they do. Swimmers lose just as much sweat in the pool as any other athlete loses on land. However, it’s barely noticeable even to the swimmers themselves since the water washes the sweat off.

6) Swimmers use nearly every major muscle group in their bodies

Swimmers use every major muscle in their bodies.

Go on, jump in! #Swimming pic.twitter.com/WJ1XYvoiBM

Swimming is a total body workout that engages all the major muscles in the body such as the chest, back, arm, foot, and leg muscles.

7) Freedivers can hold their breath for more than 10 minutes

DID YOU KNOW? Some #freedivers, or divers who swim without any scuba gear or snorkels, can hold their breath for up to 10 minutes. 🤯 P.S., don’t try that at home! pic.twitter.com/GogqHkc5kW

How long can you hold your breath? The record is 24 minutes and three seconds and is held by Aleix Segura Vendrell of Spain. #FunFactFriday pic.twitter.com/gbERGWQtBk

Spanish freediver Aleix Segura Vendell can hold his breath for 24 minutes and 3 seconds. Freediving is an underwater diving method that forgoes a breathing apparatus. Instead of an oxygen tank, freedivers merely rely on the oxygen in their lungs. This guy definitely kills it at birthday parties.

9) Over 4 billion people in the world can’t swim

36 and 45? Yet half the world can’t even swim and somehow it is easier than badmitton. https://t.co/jFvkiPuZr6

More than half of the global population does not know how to swim, so you don’t need to feel too bad about yourself. However, it could be a handy life skill. Drowning is the 3rd leading cause of unintentional injury deaths worldwide.

The odds of swimming in the Olympics are very slim:

On average nearly 2000 swimmers make it to the Olympic trials. Out of that number, only 50 of them will actually make the Olympic swim team. pic.twitter.com/4cLfPOTeo9

Olympic swimming is cut-throat! On average 1850 swimmers will make it to the Olympic trials. Of those swimmers, nearly 50 of them will actually make the Olympic swim team.

11) Women weren’t allowed to compete in Olympics until 1912

Swimming became an Olympic sport in 1896, but women were not allowed to participate until 1912 – 16 years after men. Australian swimmer, Fanny Durack, became the first woman to win a gold medal in the 100-yard freestyle in the same year.

Open water was the natural form of swimming in the early days. The first aquatic event started out in natural lakes and oceans for the first three editions of the Olympic Games.

and an artificial lake in St. Louis 1904

Although swimming has been in the Olympic catalogue since 1896, open water swimming was replaced with the creation of man-made pools. It was not until the 2008 Beijing Olympics that open water marathon swimming officially became a standalone Olympic event (source).

What I feel like when I miss even a tiny bit of hair shaving and go swimming https://t.co/DllZKVpPVS

Shaving is a swimmer’s secret weapon in the search for a competitive edge. Many swimmers shave legs and heads to increase their performance in the water. Hair removal is a popular way to not only look better in a swimsuit but to also reduce drag. According to studies, shaved skin is more sensitive to the feel of the water and its pressure, allowing swimmers to make adjustments where possible and improve their technique where necessary.

Olympic-sized pools are always 50 meters long, but they can have widths of either 25 yards or 25 meters. That’s enough water to fill more than 9,400 bathtubs! #TXWaterAmbassador #WaterFact pic.twitter.com/6hMlg5EEh2

Olympic sized pool volume is around 660,000 gallons of water. An Olympic-size swimming pool is approximately 164 feet long, 82 feet wide, and 6 feet deep. The average bathtub can only contain 70 gallons of water. That’s a lot of baths.

The two World Wars are markers for evolution in swimming. For example, after World War I, competitive swimming grew significantly and ‘long=john’ style swimsuits went out of style.

17) Swimmers can flex their toes to the ground

Having incredibly flexible ankles is a hidden talent that we see in competitive swimmers. That is, many swimmers (particularly, competitive swimmers) can lay on their backs and point their toes to the point where they can touch the ground with toes while remaining in that position.

In 1912, Johnny Weissmuller became the first man to break the 1-minute barrier in the 100 freestyle, at the age of 18 in 1922. He went on to win five Olympic gold medals in swimming and one bronze medal for water polo.  He also set more than 50 world records during his swimming career – incredible.

However, you might know him not from his swimming, but from another role. Weissmuller is more famously known for his leading role in early renditions of Tarzan movies where he is known for the iconic Tarzan yell!  (He actually was in 12 different Tarzan films).

19) Children can take swim lessons as early as 12 months

Parents begin swim lessons with kids as early as 12 months. In 2009, drowning risks reduced by 88 percent when children between the ages of one and four participated in formal swimming lessons.

Alzain Tareq of Bahrain became the world’s youngest competitive swimmer to ever debut in a world championship. She competed against swimmers twice her age for the 50m butterfly, which she finished in 41.13 seconds.

21) Swimming is a real calorie burner

Swimming is much better at burning calories than most activities. In fact, it’s thought you’ll burn 40% more while swimming than you will while cycling.  That’s a lot of effort!

This is because you’re using most of your body to propel yourself along. You’re using your arms, legs, feet and everything internal – it’s a massive boost to your lungs and your heart, too. Energetic swimming for an hour can burn up to 784 calories, depending on the stroke. Biking only burns 483 calories and hour and running burns 557.

22) The first swimming goggles were made from tortoise shells

The first recorded version of swimming goggles was during the 14th century in Persia. It wasn’t until the 1930s when rubber goggles were created.

The longest swimming pool is Casablanca, Morocco. It is 480 meters long and 75 meters wide, covering 8.9 acres.

24) How long can you hold your breath underwater?

The average freediver can hold their breath for a total of approximately 10 minutes. This is far longer than the average healthy and fit human being can hold his or her breath for. Yet, this average falls far short of the Guinness World Record time of 22 minutes.

25) Take advantage of all that water!

There’s lots of water for you to swim in. In fact, around 71% of the surface of the Earth is water, meaning there’s no excuse for you to get started!

Swimmers are a weird bunch, but in a really great way. Who can say they knew even half of what is on this list? Better yet, only a few can saw they have actually done anything on this list. What are some of your favorite facts about swimmers?

FINA to review use of Soul Cap after criticism

Which of the following is not a swimming stroke?