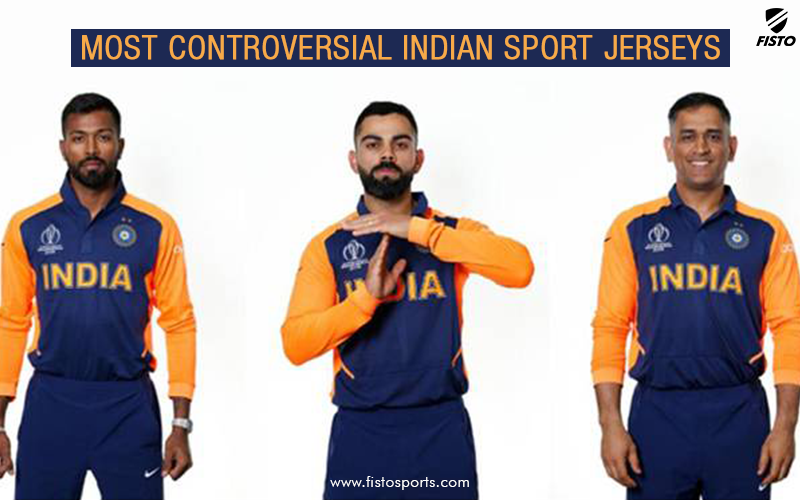 Fisto takes a look at sports uniforms that have caused a stir — from 'saffronisation' in Team India's orange jersey to Sania Mirza ' risque short skirt and more.

Sport fans love to don the jersey of their favorite sport team as much as they love the sport and their home team. While the attention is vital for popularizing the sporting culture, it has also bred controversies of various kinds into the sport many a times,

Here’s the list of the controversies that has been aroused due to the sport Jerseys. The orange dominated ‘away’ jersey India had to go with in the match against host England in the 2019 ICC Cricket World Cup, abiding the rule mandated by the ICC to strike an evident visual difference between the competing teams, fanned the flames of controversy in the country.

The opposition political parties including the Congress and the Samajwadi Party referred this as an opportunity to “saffronise” which stands for the Bharatiya Janata Party (BJP) of Narendra Modi.

While the ICC cleared the air of doubt that aroused, the fans took to Social media to compare the Jersey with other similar looking things. P.V.Sindhu at finals of  the Rio Olympics, was found wearing a Yonex Jersey,  the rival brand apparel of the official Kit sponsors, Li Ning and was a filed a complaint against  by Li Ning.

Sindhu reasoned her act, by claiming her choice of the jersey to have been associated with the color yellow she believes brings her good luck.

INDIAN BOXER’S AT THE RIO OLYMPICS At the 2016 Rio Olympics, three Indian boxers, Manoj Kumar, Vikas Krishna and Shiva Thappa, were on the verge of being disqualified from participation owing to violating the norms of the IOC that stated vests that bore country name behind mandatory.

The Indian boxers who already participated in two bouts without the name were provided new kits overnight drawing a closure on the issue. Sania Mirza who has always been no short of controversies, was criticized for wearing short tennis skirts, by some Muslim religious groups who considered it to be an anti-Muslim gesture. Sunni Ulema board, a Muslim board issued an edict demanding her to do a Muslim cover up during the tennis matches and termed her sporting apparels to be “sexual and Un-Islamic”.  Sania later slammed the critics by remarking winning takes an ultimate priority there. Alcohol consumption and promotion is considered sinful by Muslims. Muslim cricketers playing in the IPL have many a times have declined wearing jerseys which has logos of liquor brands as it would be against their religious policies and beliefs. Iqbal Adullah, Avesh Khan, Moeen Ali and Mohammad Siraj while playing for RCB, have refused to play, wearing Jerseys that promoted United Spirits which owns the team.

Similarly the South African leg-spinner in the Chennai Super Kings also refused to wear Jersey that bore logo SNJ10000 and helmet that had a logo of the British Empire.