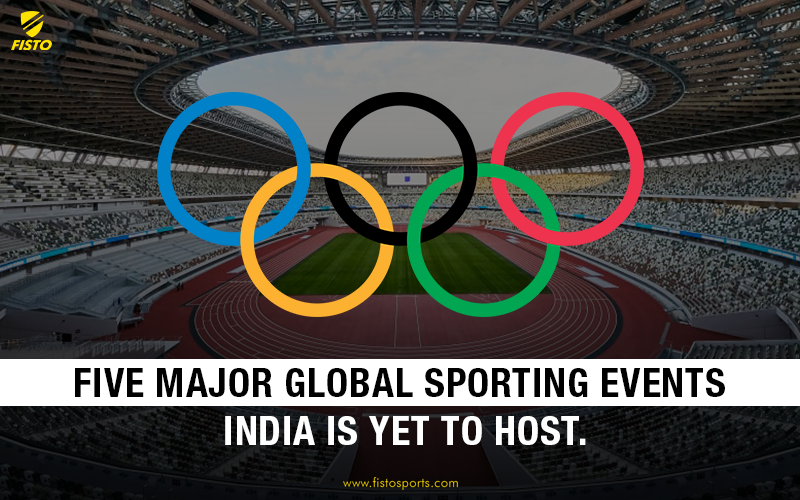 5 major sporting events India has not hosted yet

The question creeps up when talking about Indian sports that why we haven't hosted some major sporting events desptie India being world's second most populous country, has yet to share in that experience. These dream may have to wait a little longer.

Hosting major sporting events will indubitably add on to the sporting culture of the host country and will simultaneously pitch it in the world sporting maps. While hosting sports events seems to have it pros, it has many a times turned out to become a poisoned chalice to the hosting countries owing to the demands it puts forth.

Though India has hosted Cricket World Cups, Commonwealth Games, Asian Games and many such. Here are some of the major sporting events, hosting which could boost the sporting morale and mark a new dawn for sports in India.

The monetary investments, infrastructure paucity and facilities to accommodate over 15,000 athletes and a humongous spectatorship from all over, seems to be a reasonable answer but hosting an event as monumental as such has myriad benefits.  Anyhow the IOA (Indian Olympic Association) has submitted a formal, expressing its interest to bid the 2032 Olympics. FIFA World Cup, seconds the list of the biggest sporting events in the World following the Olympic Games. The massive spectatorship the events comes with is more than enough to turn all the eyes on the hosting country. But with India not having qualified for a single World Cup, except the 1950WC which India turned down the participation anyways, the football culture in India seems to be slanted towards the European League comparatively.

Anyhow, India was awarded hosting rights to the U-17 FIFA WC and witnessed a record attendance. With the upsurge in the dominance of the Asian countries in the bid for 2022 WC, India may bid the hosting rights for the 2032 World Cup. With a massive football following culture profound, hosting a FIFA can bridge the gap and set the dawn for Indian Football.

The World Games is a Multi-disciplinary sport event targeting at sports that are not a part of the Olympics. It is hosted once in four years following the year of summer Olympics and is recognized by the International Olympic Committee (IOC).

The event was inaugurated in 1981 and features the best athletes and the best teams in the world and is regarded one of the most competitive tournaments in the world. India has which participated at all the editions of the World Games and owns four medal is yet to host the prestigious tournament. The full packed stadiums in the first ever NBA  in India, played between Sacramento Kings and the Indian Pacers, in Mumbai, the city of cricket itself, stands proof for why NBA can have a professional league in India. It will indubitably impact the sport’s popularity in the country and make India one of the power houses of the sport. While the current infrastructure and situations are stumbling blocks, NBA can be a big step in boosting the sport in the country. Organized by the International Association of Athletic Federation (IAAF), the Championship athletic event that takes place once every two years, is one of the major sporting events with over 200 countries participating in the event.

India which had a terrible record in Athletics at the biggest sporting events in the World, holds no record of hosting the IAAF World Championship, which could add on to the recent upsurge India has witnessed in the category.