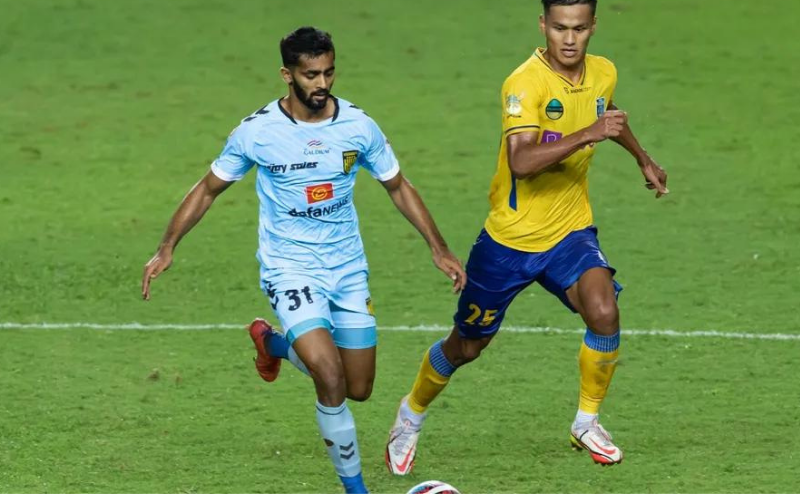 With the tweak in the foreign player rule, more Indian players have got the oportunity to shine in the Indian Super League (ISL) 2021-22 campaign.

In what is a promising development for Indian football, U-23 players have led from the front when it comes to grabbing this chance.

A total of 110 U-23 players have already played in the first 55 matches of the ongoing tournament, with them being involved in 37 goals (18 strikes and 19 assists). This is the joint most number of goal contributions U-23 players have managed at this point in a season in its short history.

These numbers go along with 239 attempts on goal and out of which 62 were on target by the same age group.

With still halfway to go, we ought to see more tricks unravel from the younger lot.

But here are some of the top-performing U-23 players in Hero ISL this season.

It was no surprise when Mumbai City FC dished out a hefty sum for an Indian midfielder in the summer transfer window, especially after the power-packed show by Lalengmawia Ralte for NorthEast United FC in the past season.

Justifying his hype, Apuia, as he popularly known, has been pivotal for the Islanders campaign so far. Apart from his eye-catching game, the footballer has formed a lethal partnership with Ahmed Jahouh and the heart of the midfield - the duo which pulls the strings for the defending champions.

Apuia leads the chart of most passes by an Indian player in the Hero ISL 2021-22 season, with a tally of 556 to his name, at a rate of 50.55%. The staggering 52 tackles, 20 interceptions, eight clearances and 17 blocks just ornaments his already glittering statistics this season.

Since we tend to talk less about goalkeepers, let’s make an exception, cause Prabhsukhan Gill has been in some phenomenal form off late. In eight matches played this season, the custodian has kept four clean sheets, the most by any player in the league.

In the same time frame, the shotstopper has shipped in just five goals (out of 69 shots faced), while making 22 saves, maintaining a save percentage of 81.48. Kerala Blasters FC are currently on top of the league table with 20 points from 11 matches and are on a 10-match winning streak, with Gill’s excellent work under the sticks playing a major role in the feat. It has been a smooth transition for the youngster, after making a switch from Bengaluru FC back in 2020.

Handed his first break by Bengaluru FC reserve side back in 2017, the side-back has thrived in their system ever-since, apart from a short stint with AIFF developmental side Indian Arrows.

Naorem Roshan Singh made his debut last season, but saw himself more in the sidelines, owing to the star-studded line-up the Blues already had at their disposal.

As the four-foreigner rule came into effect, Singh was right back into the scheme of things, having already made nine appearances this season. Apart from the awe-striking five assists, which is the highest by a Bengaluru FC player and just one short of topper Ahmed Jahouh, the footballer has been a livewire on the overlap.

Having said that, he has also maintained his all-round scores intact, by making regular duties in the defence as well, with 39 tackles, 15 interceptions, 23 clearances and 10 blocks to go along with.

Storming into the scene with an appearance in the 2017 FIFA U-17 World Cup, Jeakson Singh was destined for greater heights and he has lived up to the expectations.

Following small stays at Minerva Punjab, Indian Arrows and a few appearances for the Kerala Blasters FC reserves, Singh has been a mainstay in the Hero ISL since 2019. Known for shouldering immense workload in the central midfield area, incoming coach Ivan Vukomanovic had no hesitation in keeping faith in him and it has clicked so far.

With 434 passes at a rate of almost 40 passes per game (87.09% accuracy), he is in the pole position for his side in the department. The Indian international has been like a shield to the defence as well, with 54 tackles, 30 interceptions, 15 clearances and 22 blocks to his name already.

It has been a season of side-backs, as another player from the position - Akash Mishra makes the list too. The footballer has played all the minutes of Hyderabad FC’s campaign this season, which proves why he is such an important player for Manuel Marquez’s side.

With 430 passes so far, at an average of almost 40 per game, the left-back has been on a roll this season and even provided a couple of assists.

Mishra’s service in the defensive zone has been more than good, with 50 tackles, 19 interceptions, 25 clearances, 11 blocks to his name. Also a former starlet of the Indian Arrows setup, his trajectory changed after donning the Hyderabad FC colours, having also earned a national call-up last year.

Lalengmawia Ralte: 'I like Busquets’ calmness and the way he controls the game and reads the game'

Who do you think will win #YPOTY ?