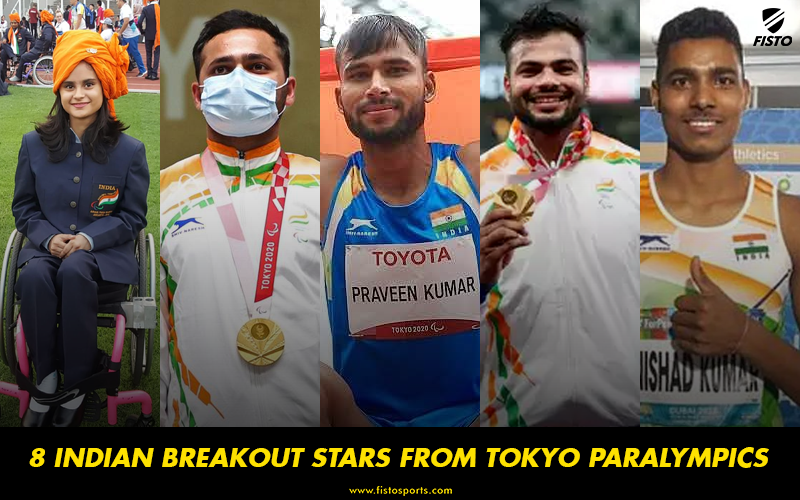 These Indian para-athletes rose to star status on the world’s biggest stage.

We were told to expect the unexpected for Team India at the Tokyo 2020 Paralympics – Likewise, it turned out to be more than quite an outing and produced its own breed of resilient and resurgent Paralympic champions.

Here’s a closer at eight of the brightest Indian talents who peaked at just the right time and went big in Japan.

A sigh of relief after mounting a magnificent comeback. 😌

Statistically, she’s the most talked-about Indian athlete at this Games in various states across the country and that goes to show how exciting this young girl is. In a world full of Bindras, Chopras and Bhakars the name on our lips this edition will be Avani Lekhara.

We predicted Manish Narwal to be one of the breakout stars of the Paralympics before it began, and boy oh boy did he deliver on our prediction.

At just 19 years old, Manish Narwal announced his arrival on the biggest stage of all with a spectacular performance in Tokyo, breaking the Paralympic record and having broken the world record, with an assured wire-to-wire performance to take gold in the P4 Mixed 50m Pistol SH1.

Praveen Kumar was always expected to emerge as a star, but perhaps not until the Paris 2024 Games. In Tokyo, the 19-year-old went ahead and became the youngest Indian to win a Paralympic medal. In the process, the youngster also set a new Asian record with a 2.07m jump to finish behind Great Britain's Jonathan Broom-Edwards, who notched up his season's best effort of 2.10m for the gold.

Who on earth had heard of this spear man beast before the Games began? Not me. But, after it’s all said and done, Sumit left a massive impression as he set a world record thrice in the same event with ease – truly a stuff of legends. That is no easy feat, especially doing that during a mega quadrennial event.

Sumit set a world record with his first 66.95m throw, then broke it with a 68.08m in his second attempt and raised it to 68.55m in the 5th. Such were his outstanding performances and it’s hard to see something quite similar in the future and each of his throws shall remain etched in our heads forever.

Nishad Kumar had hinted at his huge potential in his appearances on the World Para Athletics Championships in 2019 but he left the watching audience from screen in no doubt with his performances in Tokyo.

The 21-yer-old put together a string of stunning performances at just the right time to capture a silver medal in the men's high jump T47 event with an Asian record effort.

Earlier this year, the 21-year-old contracted COVID-19 while training at the SAI Centre in Bengaluru. But as soon as he was cured from the disease, he made sure that his disabilities won’t fade his dreams by clinching a historic silver with a jump of 2.06 mark.

A fifth #Gold medal of these Games for #IND - and another in #Badminton !

Badminton prospect Krishna Nagar was nothing short of sensational for the Indian badminton, a sport making its debut at the Games in Tokyo. The 21-year-old has overcome bullying to claim a gold medal in the men's singles SL6 category after defeating Hong Kong's Chu Man Kai 21-17, 16-21, 21-17 in the final.

Some other athletes might have caught the eye more than Yogesh Kathuniya, but make no mistake – he had a sublime time in Japan.

Competing in the men's discus throw final F56 category, the B.Com graduate from New Delhi's Kirori Mal College sent the disc to a best distance of 44.38m in his sixth and last attempt to clinch the silver.

The 19-year-old Palak Kohli may well have missed out on a bronze medal, but her reputation continued to grow, with some solid showings in her debut Paralympics and in three years’ time in Paris, she will be hoping to return with increased experience and quality.

We would love to know who’s your favourite Paralympian and what you have learned from him or her at the recent games. Share with us in the comments below!