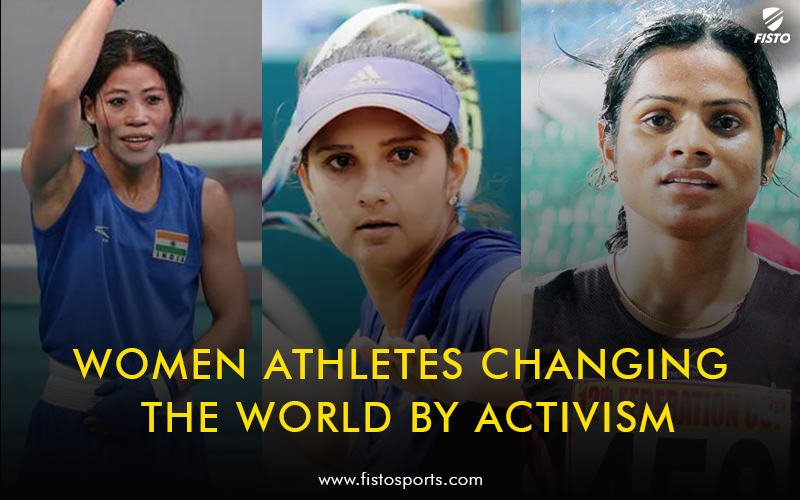 8 Indian Women Athletes Who Have Also Been Social Activists

Being a female athletes, it take more grit to succeed in the male-dominated world of sports. And increasingly, these iconic women are flexing their strength off the the field to also address serious issues in society.

“I am not going to stand up to show pride in a flag for a country that oppresses black people and people of color” told Kapernick on refusing to stand up for the anthem in protest of the country’s treatment of its minorities, and till date it is considered one of the best social activisms by an athlete.

Athletes bestowed with demi-god statuses, have many a times milked the limelight, to bring a revolution in the society. While this is a situation worldwide, here are some of the Indian women athletes who have been changing the world with their activism. “Magnificent Mary”, the six-time World time Champion is also an animal right activist. She is a supporter of PETA and has written to the education Ministers of India asking them to include PETA’s Compassionate Citizen Human Education Program in the official school curriculum. She is also a member of Parliament and claimed to help ‘People in Manipur’. Dutee Chand who is very well known as the challenger of patriarchy, is the first athlete from India to have openly confessed herself a gay and is the poster girl for Queer pride. She is also considered the ‘beacon of hope’ for the LGBTQIA+ community in India. The Ding Express apart from smashing medals, is also often spotted working for the welfare of the Village she hails from. When her village raised a fight against the liquid vendors in the village, Hima lead from the front and teamed up with few women to demolish the liquor shop. She received a threat the following day, yet she stood upto the occasion and remained undeterred. Sania Mirza, the first Indian women tennis player to reach great levels is an inspiration herself. She is appointed the UN Women’s Goodwill Ambassador for South Asia, to mark the International day to end Violence against Women. Often referred to as the “glamour girl”, she is remembered as an athlete who beat P.T.Usha twice. On her retirement she joined the Karnataka Film Industry and rocked the screens for a while after which she squired up with Mercy Kuttan & Rao and initiated the clean Sports India and started a school to double up the demand of schools with sports. Krishna Poonia, the discuss thrower from Haryana, is a strong advocate of woman’s rights to education and curbing “male-dominated” Indian society. She has also been consistently working to improve facilities for Children has joined the Congress Party. The cricketer, who has a list of firsts to her name, is an ideal feminist. She has participated in many events to promote Women sports and has also shown her love for the game by lending her voice post retirement. Dipika Pallikal who is the first of Squash players to rise to prominence, refused to participate in the National Championship due to the gender inequality in the prize money. She continued participating when equal pay was provided.