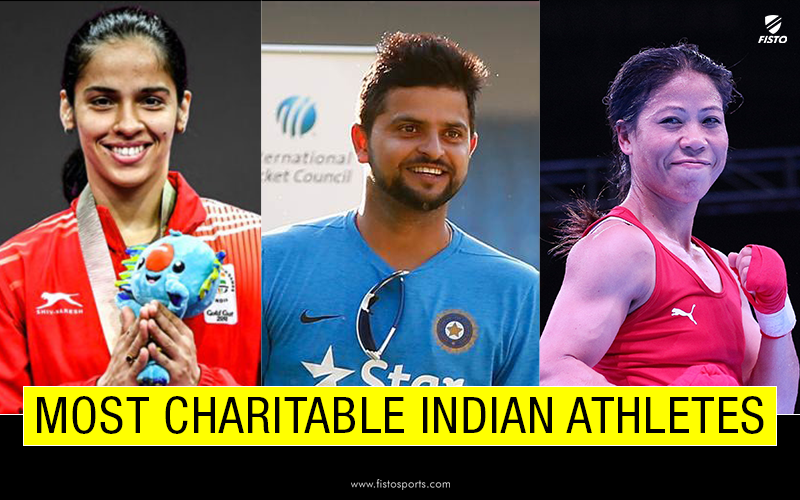 8 of the most charitable Indian athletes

There are so many athletes and teams doing great things, but these eight rose to the top.

The sport stars who have been winning games for the country are also winning the hearts of the citizens and are many times perceived to be accredited with demi-god statuses. These athletes have many a times used their influence to go wider beyond the play grounds and give back to the society  and make it better by setting up NGO’s and contributing for Charity purposes,

Here’s a list of the Indian athletes who have who have set up charities and helped make a better society. The Badminton Pro has many a times lent a hand for charity including the time she paired up with Charities Aid Foundation (CAF), a Non-profit organization to support the flood victims in Tamil Nadu. She was appreciated for her Charities and has even been ranked the 18th most Charitable Sport star in the World by Do something.org.

The ex-opener for the blues has a foundation named after him, that it is set on a mission to buttress children in need and serve various social causes. He also launched the  “Ek Asha” campaign, which is a free community kitchen in Delhi. The 2011 World Cup Star, was diagnosed with Cancer in his left lungs soon after the World Cup got over. He underwent the treatment, survived the disease and made back into the National team .Soon after he recovered the dreadful disease, he founded an Organization called ‘YouWeCan’ to help others fight the disease. The Organization works in depth with those diagnosed with Cancer and counsels their families. The Payyoli Express after her successful career in the tracks has engaged on a new mission to help groom talents for India and has started an athletics school where she has undertaken the strenuous task of scouting deserving talents and is training them free of cost. With a mission of grooming talented athletes who can bag medals for India at the Olympics, she has started the Usha school of Athletics and is serving the purpose of developing future stars. The beloved captain of the Indian Cricket team, initiated the M.S.Dhoni Charitable Foundation in 2010. The foundation partnered with the Help for Heroes foundation to conduct Charity matches and the fund raised was give to the Indian Army. The Indian cricketer, Suresh Raina paired up with his wife to set up the Gracia Raina Foundation that he named after his daughter. The foundation aims to empower underprivileged girls and Women through education and inculcating other training skills. The ‘Magnificient Mary’ is a member of the Rajya Sabha and has been serving tenaciously for a number of Social causes. She has set up an NGO and has established a boxing foundation to preach boxing free of cost to the unprivileged. The boxing foundation is one of the SAI training centers. The world cup winning captain Kapil Dev raised a question on the need for an institution dedicated solely to the community development and providing educational opportunities to the underprivileged. He initiated Kushii, a school that aimed at improving the quality of school education for children hailing from Low-income communities.