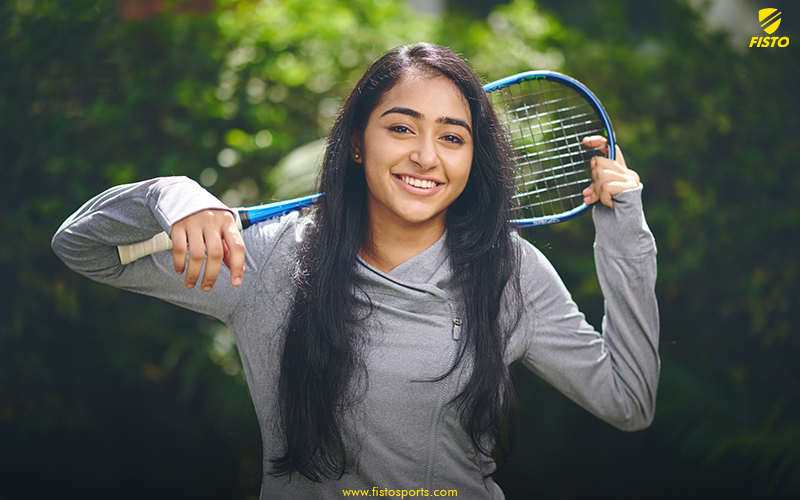 The Indian squash landscape of talented youngsters has seen a tremendous boom over the past couple of years. Aishwarya Khubchandani is one of India’s burgeoning squash talents alongside Sanya Vats, Yoshna Singh and Abhisheka Shannon.

Aishwarya has exhibited her class through and through, and she is pacy and versatile with her movement. That, combined with her exceptional qualities both on and off the ball which earned her the nickname Lightning NickQueen and AK47.

Blessed with athletic ability from a young age, Aishwarya tried her hands at various sports like gymnastics, basketball, skating, swimming, and table tennis to some extent before choosing Squash as she thought it would keep her fitter and felt more rhythmic than table tennis.

After years of steady progression and learning the tricks and trade of the sport, the 16-year-old now recognised as one of India’s brightest prospects in Squash.

The cultivation of her squash prowess and sheer determination would eventually made her a National Champion, Indian Junior Champion and Asian Junior quarter-finalist. Aishwarya was also part of team Indian girls team that finished 5th in the world championships.

Her idol and stylistic equivalent is Raneem El Weleily, and the similarities are plain to see.

Aishwarya is the present and future of the Indian women’s squash, and she has everything it takes to be a trailblazer for the next generation of India’s young dreamers. And her ascent to greatness has only just begun.

In the interview, the Podar International School student and current India’s No.1 in girls U-17 reflects on her journey in Squash so far and hurdles that peppered her path, how music helps her flow and focussed and her future goals.

Read -  Kulvir Sharma: “Squash has made me multi-talented and a multi-tasker”

How do you think you’ve developed as a Squash player’s perspective since your formative years?

I believe my foundation as a squash player was very well developed thanks to my coaches, and over the years my skills have improved with experience. I have travelled around the country and world, and that has helped me grow as a player by watching and learning from players and coaches from different countries.

Michael Jordan. After seeing his story on “The Last Dance” on Netflix, I have been nothing but in awe of the basketball legend’s skills, mentality, and career.

Who have been some of your pioneering supporters over the years and why?

My family, friends, and coaches have supported me throughout my journey. My family has made lots of sacrifices to help me pursue my dreams, and my friends have helped me keep going by helping me balance my academics and pump me up for tournaments! My coaches are the main reason I am where I am today. If it weren’t for the knowledge and skills they have shared with me, I would be nowhere. So this is a Thank You to all of them!

Last year must have been so difficult for you and your family as you’ve lost your home in a building collapse, lost all of your certificates and trophies, based on which you were looking at taking admission for higher studies abroad. How did you cope with that situation and what motivated you to continue playing? Who supported you during the difficult times?

As a matter of fact, I wasn’t coping well at all. I was planning on withdrawing from all upcoming tournaments. My family was distraught, and still dealing with legal matters, and I wanted to be there with them. However, my friends and their families encouraged me to play and my coaches were extra supportive and coached me mentally more than physically to be strong enough to even go into the tournament that was weeks away (the Junior Nationals). I think what motivated me to continue playing was the idea of crossing one of the biggest hurdles in my life and be able to make my story memorable.

What's the craziest thing you've ever done in a Squash court?

I think it would be when I danced with my teammates after winning the deciding match for team India at the World Juniors 2019. We finished 5th, and it was a thrilling way to end the tournament. So, I danced the iconic steps of “Chalti Hai Kya 9 Se 12” on the court, while the match was being live-streamed on the PSA Channel.

Read - Akanksha Nitture: “I believe your biggest competition is yourself”

I would say my game involves a lot of movement and more about working with my lengths and basics. I like to try to play like Raneem El Welily, the former world number one. Just last month, she retired from professional squash, and I couldn’t be more heartbroken. I’m really going to miss watching her play. She has been an idol for me, as I truly admire her technique, movement, and determination.

Describe a situation where you had to make a quick decision in a match and what did you learn from that experience?

It was the fifth game; I was 8-4 up.  As I got closer to victory in that really crucial match, I started to attack anxiously. In this hurry, I hit a couple of tins, and less than 2 minutes later, the game was tied at 8-8. I had to quickly change my plan to one that required more construction for each point. I then played more patiently and attacked on the openings I created, instead of rushing to do so. I learnt that sometimes, it may be easy to get the lead, but it's hard to maintain it, and that the last few points are hardest to win.

Let's go back in time. Can you share with us how you got started with Squash?  How old were you, who introduced you to the sport, and what is it about Squash that resonated with you?

I was always an athletic child. I tried my hand at gymnastics, basketball, skating, swimming, and many other sports. I never played any of them as anything more than a hobby.

When I was around 9 years old, my elder brother had just dropped playing squash after giving it a try for a month. As I had many free days in the week, I started playing squash and table tennis simultaneously. However, after a couple of months, I began to mix the swings up. Both my coaches said I had a lot of potential in either sport, and they both asked me to choose one.

I chose squash because I thought it would keep me fitter as I would cover a lot more ground and because it felt more rhythmic than table tennis. I’m really glad I chose squash. It has been a wonderful journey.

There are lots of rivalries in Squash, do you have one? If yes, is it a motivating factor that wants you to do better yourself?

Of course. I enjoy rivalries on the court with fellow teammates like Sanya Vats and Yoshna Singh. Their competition only motivates me to work harder. We all have an incredible friendship off the court, and we always want to put up a good show every time we get to play. I think that a healthy, friendly competition makes me want to better myself the most.

Do you have any pre-match superstitions?

I usually eat the same breakfast (mostly due to lack of options at the vegetarian section), wear my socks, shoes, and wristbands in the same order, and listen to the same playlist before every match.

Fun Fact – I dedicate a song for almost every tournament I play. I make it a point to listen to that song at least once before I get on the court for every match that week.

If you feel low after a match, how do you deal with the downtime and what keeps you sharp?

I listen to a lot of music; I have several playlists that I listen to depending on my mood. Music helps me more than anything else. It takes me into my zone, and I always come out of it more focused on what comes next.

Ramy Ashour – He has been my idol in the world of squash.

Roger Federer – He has always been an inspiration.

Shawn Mendes – My favourite singer. I listen to his music the most.

Which Squash player’s journey do you find most inspiring?

Mostafa Asal. He’s young, filled with hunger, and performs. Being merely a junior, he went on to beat a former world champion, and make his mark in the world of professional squash.

Are there any particular memories from your Squash career so far that stands out as being special to you?

I think the World Junior Team event 2019 was the most memorable tournament I have played. It was the first time I participated in a team event at that stage, and I was fortunate to have such talented, yet fun teammates. The most special moment was when I played the deciding match for team India to finish 5th in the event and ended up winning it. It felt incredible to bring home the victory, and celebrate it with a winning dance with my teammates.

What are a few goals that the team has set this year? What about personal goals you hope to achieve in the long-term?

Originally, my goal was to win this year’s Asian Junior Individual Championships. But now I am aiming to go bigger – I have 2 more World Junior Squash Championships to play, and I’m working and hoping to make it to the top 4 before I age up. I’m aiming to be a British Junior Champion as well. Beyond juniors, I want to get the opportunity to bring India laurels at the commonwealth games, to make the country proud.

Last time you strung a racquet? December, before the British Junior Open.

Crosscourt or down the line? DOWN. THE. LINE.

Either “Something big” by Shawn Mendes, or “Rewrite the Stars” by Zac Efron and Zendaya