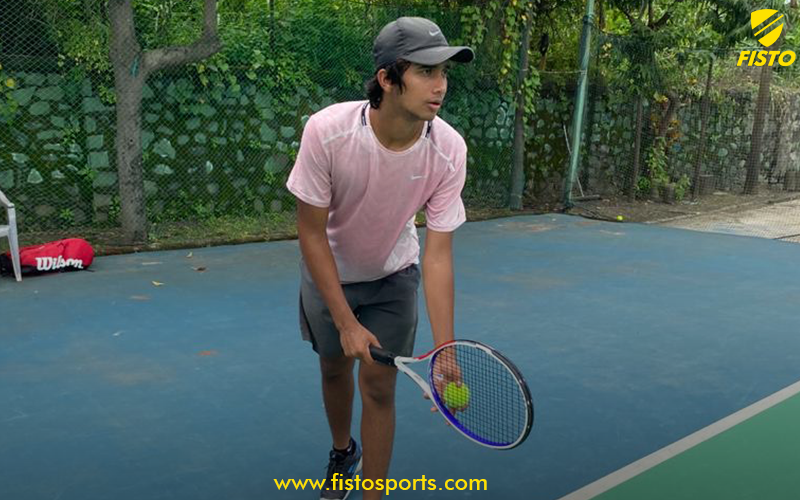 Still just 18, Aryaan Bhatia is certainly in the early stages of his career and still has plenty of time and traits to ascend the rankings.

Growing up in vibrant, passionate and tennis-loving family, Aryaan Bhatia was one of many young who sought to follow the glorious path set before them by Mr. Asif Ismail – ex-Davis cuper, Arjuna awardee and Chhatrapati Shivaji awardee.

Against this backdrop, Aryaan’s tennis journey began when he was 3-years-old. Since then, he has worked his way through the ranks and now has become one of the top prospects in Indian tennis.

As bold as he might seem, he is remained humble when it comes to his ability, and rightly so. He’s keen to point out that he’s only turned 18 few days back, and the first thing that comes to mind if you watch Aryaan is aggressivity. His blistering pace, knowledge of space, positioning on the court and his physical advantage combined make him one of the interesting players to watch out for. 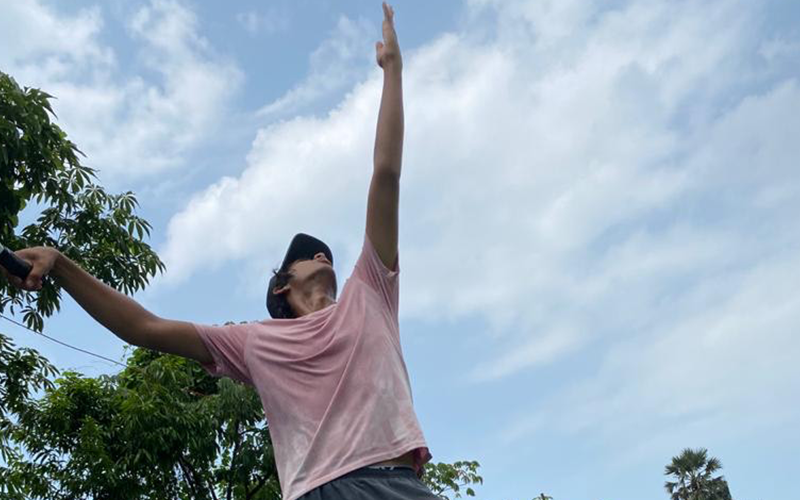 He remains optimistic regarding his future, especially in light of the versatility and raw talent he has flaunted to this day. This optimism shouldn’t be mistaken for naivety though, as anyone who knows tennis knows how quickly things can go downhill.

Currently ranked state No.1 in U-18 category and 7th in national, his best ITF junior rank was 229. And Aryaan has been training in Mumbai and Pune under the watchful eyes of Mr. Alon Moses and with Mr. Nandan Bal.

The Rizvi College of Arts, Science and Commerce student has already proven he has the ability and individuality to shine on a bigger stage, within the coming months, the raw talent of Aryaan will be on show for all to see on the biggest stages, he has a highly challenging season ahead.

I started playing tennis at the age of 3. I used to hate it at that very moment and I would pray for the session to get cancelled. My parents put me in tennis because my uncle used to play tennis Mr. Asif Ismail. He is played Davis Cup for India and Hong Kong. I was playing one of my under-10 tournaments and I lost in the early rounds and I saw that the winner gets a huge trophy and I really wanted that. I remember telling my mom that I will come back here next year and win it and I did that and that was the time I realized that this was something I will purse.

Who were your Tennis idols when you first became interested in the sport? What was is about their character or achievements that you admired?

My tennis idol is my uncle Mr. Asif Ismail ex-Davis cuper, Arjuna awardee and Chhatrapati Shivaji awardee. Hearing stories of his achievements influenced and inspired me and I hope to represent my country just like him someday.

In Mumbai, I train with Mr. Alon Moses and in Pune with Mr. Nandan Bal.

My parents have been very supportive of my tennis. They have always kept me positive and always given me the right advice. Even when times have been extremely rough for me, they have never failed to put a smile on my face. I feel whatever I have achieved today professionally or personally, it’s just because of them.

Are you balance the rigours of tennis and education at the same time?

Yes, I do. It is tough though I still manage to get decent marks in my exams and give it my 100% on the court. 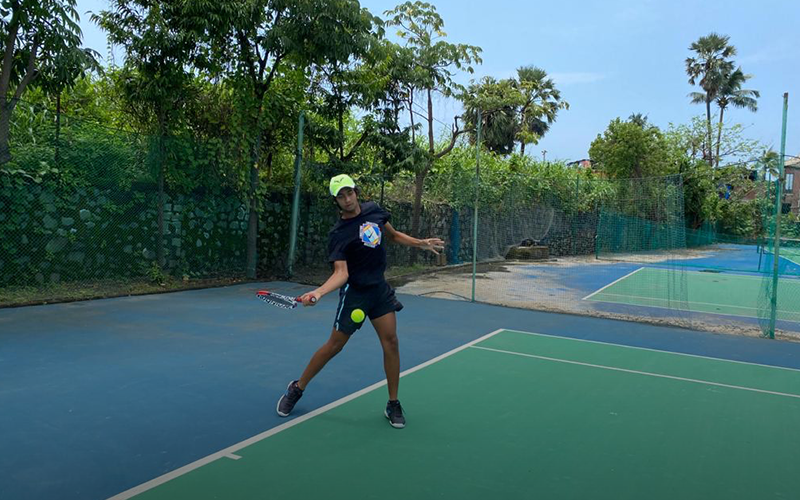 I would want to say when I won the Surabaya ITF grade 5 singles event last year and runners up in the doubles and I also won the ITF Grade 5 doubles event the following week in Jakarta.

I am the type of a player who wouldn’t leave the court until I get my stroke fixed or be in the process of making it better.

My nutrition is handled by Mrs. Krushmi Chheda. She and her team have really helped me with my pre-and-post-match meals and recovery. Skipping, long-distance runs and sprints have helped me gain stamina and built my endurance.

What Americans/Europeans do better in terms of tennis coaching/training than Indians? What should Indian tennis learn from them?

Americans and Europeans have better facilities and the weather they play in is a lot more suitable for long and tough training hours. They even receive major support from the government!

I feel the toughest aspect of tennis is travelling, getting accustomed to a new city, the weather, the food and being away from your friends and family. I enjoy competing, meeting new people. 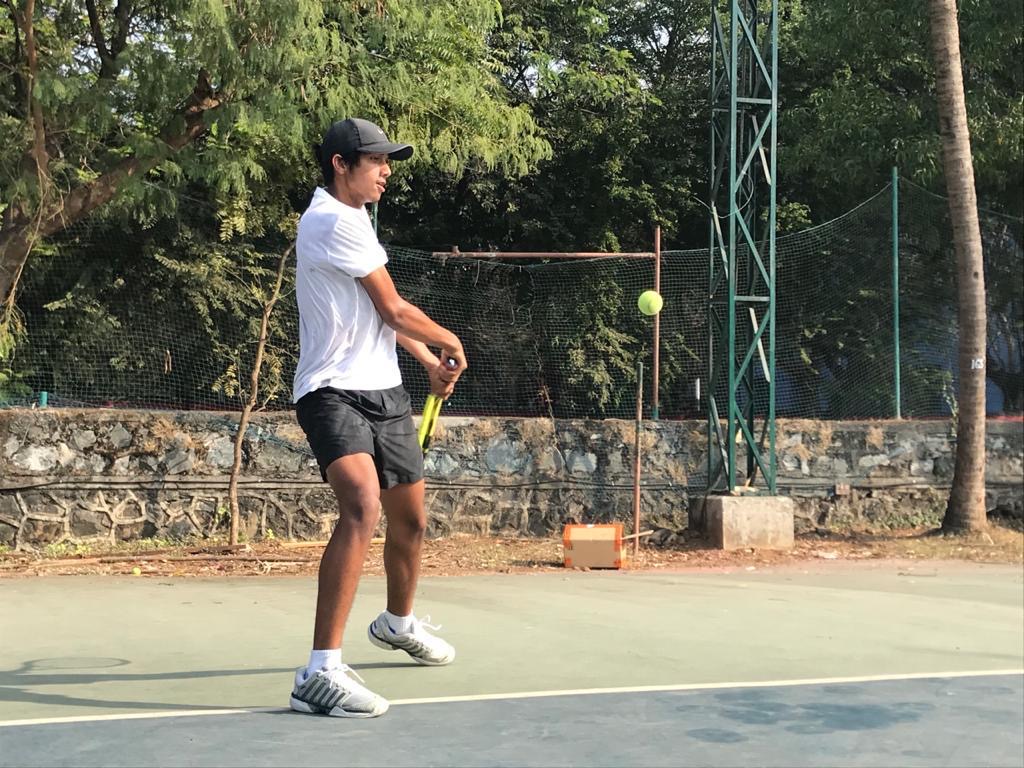 What sacrifices did you find the hardest in order to pursue your tennis career, and would you say that gymnastics has changed you as a person?

Sacrifices have been endless since I started competing. Missing school, family vacation, birthdays, school trips, sleepovers and much more. Definitely, tennis has made me a better person and taught a lot of life lessons.

I remember I was playing a match in Panchgani and actor Amir Khan was also there and he came and sat next to my chair on the court and all the players and parents were running to meet him without thinking that there is a match going on.

I would be more inclined towards academics and do something in that field.

Backhand comes easier to me

Instagram is my favourite social network. It’s just so easy to connect with people through dm’s

My favourite tournament would definitely be the two weeks in Surabaya and Jakarta.

Finally, what goals have you set for the coming years? And for the next years of your college/school?

My current goals are to do well for my college and to start playing the pro circuit.

Who would be your celebrity doubles partner?

Whenever I watch Toy Story.