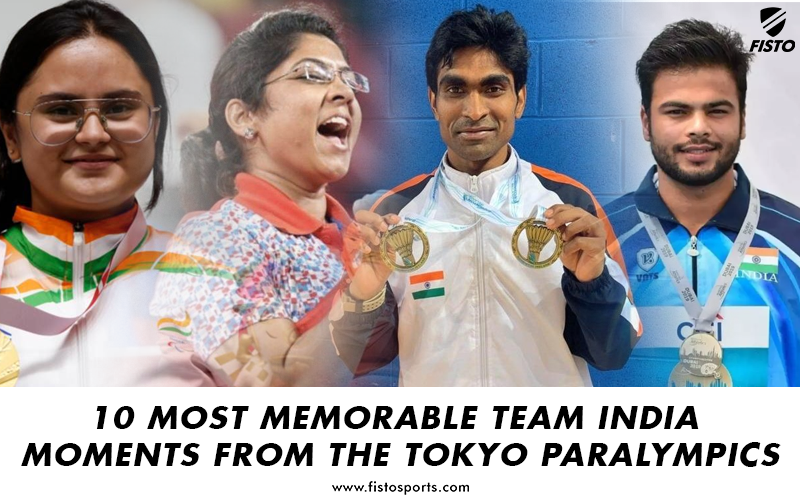 We have seen the standard of Paralympic sport rise once again, new stars come to the fore, established athletes impress on the big stage and some Games veterans passing on the torch to the next generation. Here's what stood out from a memorable 2020 Tokyo Paralympic Games.

The 2020 Tokyo Paralympics are a wrap, and these Games were definitely ones to remember. Established stars such as Devendra Jhajharia, Mariyappan Thangavelu and Singhraj Adhana delivered on their sky-high expectations while new ones emerged in first-time Team Indian Paralympians Avani Lekhara, Manish Narwal, Praveen Kumar and more.

The beauty of the Paralympics is that there are so many human stories and athletes who are delighted to tell them – stories of grit, determination, and championing against all odds. Time after time, Indian para-athletes poured out their hearts, in many cases just minutes after a four-year dream had been mercilessly destroyed.

After two weeks of watching some of the world's best para-athletes championing against all odds in 539 events in 22 sports as Team India has enjoyed its best-ever medal haul at a Paralympics, a stunning achievement.

Underneath each of these amazing athletes is a network of family, friends and coaches, who are all incredible in their own right. They have supported for years and have all contributed to these great moments.

Every Paralympics provides a mountain of breathtaking moments and this was one was no different – despite the unusual backdrop that COVID-19 gave it.

India’s total number of gold medals at the Paralympics before Tokyo was four. India won five of those just at these Games.

With five medals, the shooting contingent emerged as the biggest contributor, followed by high jump and badminton with four each. Badminton and Taekwondo made their debut in Tokyo, both of which were represented by India.

We can be enormously proud of Team India and what they achieved in Tokyo. The medal haul was outstanding but the spirit in which they competed was even better.

Fisto Sports have rounded up the best bits of this summer's Paralympic Games in no particular order.

The moment💜 Outstanding from Avani Lekhara. Only 19 yrs and the youngest competitor in the final, she can only get better. Two medals: a #Gold and a #Bronze already. #Tokyo2020 #Paralympics pic.twitter.com/Oi0YZoFisY

As it never too late too late to start, it is also never too early. These words were brought to life by Avani Lekhara, an ace para-shooter who has gone through hell and high water, has shown ability beyond her years in key performances to secure the double medal in Tokyo.

Need a 🔟? Call Harvinder Singh! 📞#IND's first ever #ParaArchery #Bronze medallist produced the goods when it mattered in his 3 shoot-offs on road to the medal in Men's Individual Recurve. 🤯#Tokyo2020 #Paralympics @ArcherHarvinder pic.twitter.com/mwUTho3pK4

Most Paralympians train and compete in their events for years, fine-tuning every element of their performance before taking those efforts to the world stage.

An economics scholar from the Punjabi University, Patiala, Harvinder Singh developed interest in archery after watching the 2012 London Olympics, nine years later, notched up India's first-ever archery medal in the Paralympics, holding his nerves to down Kim Min Su of Korea in a thrilling shoot-off for the men's individual recurve bronze was an enchanting experience, to say the least.

Singh, who is from a small village Guhla Cheeka near Kaithal in Haryana, was stretched to the fullest in the first two rounds, but he showed tremendous resilience to overcome his fancied opponents via shoot-offs.

THE DETERMINED UNDERDOG WHO SHONE THE BRIGHTEST

There’s the Olympic spirit in the heart of paddler Bhavina Patel, who’s table tennis silver was a stunning, unexpected success as she became India’s first table tennis medallist. Defeating top-seeded players in her road to silver, she displayed immense grit, determination and focus for the game.

Devendra Jhajharia, the legend who delivered yet again at the biggest stage.

Devendra won a silver medal in the men's javelin throw F46 class. He has previously won two Paralympic gold medals at Athens 2004 and Rio 2016 Games. (He levelled with Joginder Singh Bedi, who also has three medals - two bronze and one silver).

Thanks to his big goals and unrivalled achievements, Devendra is now in the conversation of the country’s most decorated Paralympic athlete.

Some athletes are so good that breaking the world record looks like it will be only a matter of time. This was the case with Sumit Antil in the men’s Javelin throw F64 and he delivered on the biggest stage – setting a world record thrice in the same event – truly a stuff of legends.

On the other end of the age spectrum, 18-year-old Praveen Kumar proved you’re never too young to achieve big dreams.

Praveen became India's youngest medallist in the high jump which came with an Asian record for the debutant.

The teenager is a Noida resident competing in his debut Paralympics, set a new Asian record with a 2.07m jump to finish behind Great Britain's Jonathan Broom-Edwards, who notched up his season's best effort of 2.10m for the gold. This was also Kumar's personal best performance and his first major medal since taking up the sport in 2019.

As badminton made its Paralympics debut at Tokyo Games, all of the hype and expectation, the first and most important duel in the court lived up to all expectations that saw Pramod Bhagat scripted history as he became the first-ever champion in the men's singles SL3 category.

Suhas Yathiraj, 38-year-old Noida district magistrate, who has an impairment in one of his ankles, came up with a valiant fight against two-time world champion Lucas Mazur in a 62-minute summit clash and took the gold medal match of men's singles SL4 category to three games. He became the first IAS officer to win a medal at the Paralympics.

Born with a deformity in right hand, Manish couldn't continue playing the sport he adored the most – football – beyond the local club level. Took up shooting in 2016, soon found himself crushing the sport.

Now, 5, years later, he is a Paralympics gold medallist. He is a living embodiment of how determination can triumph over adversity.

NISAHD MAKES IT AGAINST THE ODDS

India's second medal was also a 🥈 and it was a superb personal best and Asian Record equalling jump by Nishad Kumar.

For high jumper Nishad Kumar, there’s no motivation quite like the adrenaline and pressure that comes with competition. Hailing from Una in Himachal Pradesh, Nishad lost his right hand in a fodder-cutting machine at the age of eight that resulted in the loss of his right hand. That’s why he competed in T47 category, which is meant for athletes with a unilateral upper limb impairment resulting in some loss of function at the shoulder, elbow and wrist.

Earlier this year, the 21-year-old contracted COVID-19 while training at the SAI Centre in Bengaluru. But as soon as he was cured from the disease, he made sure that his disabilities won’t fade his dreams by clinching a historic silver with a new Asian record with a jump of 2.06 mark. The video of Nishad jumping over the fence will long live in our memories.