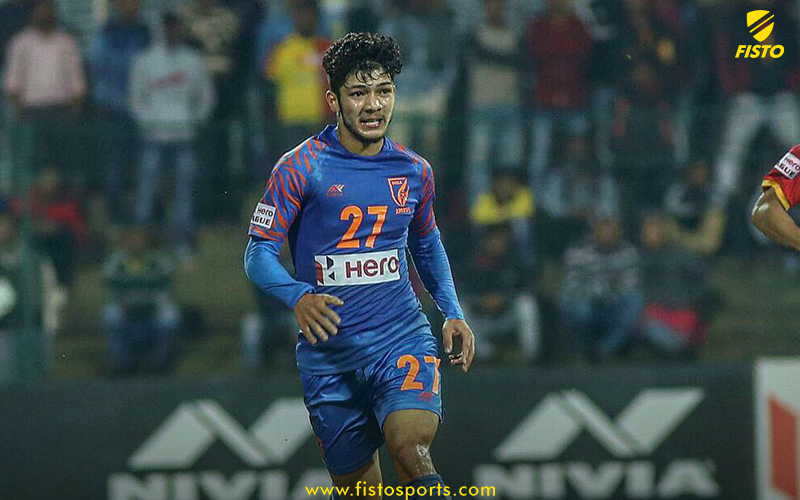 Ayush Adhikari: “I always work hard not to meet my expectations but to exceed them”

Delhi starlet Ayush Adhikari has been one of the best Indian Arrows player for a matter of days after signing for the club last year, but he set his sights on continue to improve his game overall.

Ayush comes from a family that loves sport. His father is a football coach at a local academy near his home in Delhi and that is where he started to realise his passion for football and since then there has been no looking back.

However, the big break in his career came when he was selected for a stint in Germany as part of U Dream Football Programme, a training programme by U Sports that offered young talented footballers exposure abroad.

The midfielder has flourished in his new surroundings. He spent four years in Germany, at Hoffenheim and Bitburg - has progressed to the point where he’s now seen as an integral piece of the puzzle at the Indian Arrows.

With a tenacious attitude, tremendous range of passing and desire to keep on running, the Delhi boy star was putting up shifts in the midfield in the Hero I-league before lockdown.

A free-sprinted playmaker, Ayush is the type to always want to be on the ball and can be seen making space to receive a pass to either spray across the park with millimetre-precision from his wand of a right foot, or contrastingly to make a darting zig-zagging run to the keeper’s left-hand side in order to create mayhem and confusion for the opponent.

The elusive footwork, effusive confidence and fearlessness of youth makes Ayusch could be India’s next midfield maestro.

You have come a long from being a star striker for Delhi in Santhosh Trophy to now as a Mr.dependable midfielder with Indian Arrows. How would you define your journey till now?

It has been great. After playing in the Santosh Trophy to representing the Indian Arrows squad in the I-League, it was a level up for me. It has helped me to push myself harder and I know the journey has just started. I am working hard each day to improve myself in all aspects of the game.

You took up football at a very young age (7), who was the person who first pushed you towards football?

Yeah, I started playing when I was around 7 years old. I started playing football because of my father. He was a coach of a local academy in Delhi and once he took me there, I eventually fell in love with football.

And who are your idols or favourite players? Where are you studying and how supportive is your school/colleges in helping you in terms of football?

I am currently doing my 12th through open schooling, so I get time to play football and for training as well.

You also pulled off a surprise win against Churchil Borthers in a 2-1 victory. What went into that win? How did you lift your spirits after going down?

That match was my first I-League match. We conceded the goal first, but we fought hard and the end result came in our favour. It was the result of our teamwork. Football is all about teamwork and we, as a team, make sure we fight hard till the last minute of the game.

And as part of the Indian age group sides, you’ve travelled to Germany for the U Dream Football Programme. Does this give you a little bit of an advantage as compared to other upcoming players who haven’t trained abroad?

Yes, I think there are advantages of training in Europe. Due to the footballing atmosphere, facilities etc.… it has helped me a lot to improve my game in many aspects and it is really helping me till now.

How has your experience been under Coach Venky sir considering the fact that you have grown a lot under his influence/guidance particularly in the midfield?

Under Venky sir, I have learned a lot and have acquired more knowledge about the midfield. I think, it has helped my game to flourish.

You are deemed as India's next biggest thing in Football. How do you look up to that and meet the expectations?

I always work hard not to meet my expectations but to exceed them, as I know the journey has just started. I work hard to improve myself each day. What else do you do? Is there something else that you do that you like to perfect outside of Football?

I am a football only person and there is nothing much outside football that I am really into. Sometimes, I play my guitar. So, that’s it!

One such moment was the time that I came to know that I will be playing in the I-League for Indian Arrows.

Finally, what goals have you set for the rest of 2020? And for the next years of your college/school?

My goal is to keep myself motivated and to improve myself. I know that is going to help me become a better player as well as a better human. And above all, to work hard and represent the National team.

I love to play more of an attacking game, but honestly, I have not figured out with whom I must compare myself. I love the best version of me.

What is your go-to play or turn or skill?

I make sudden turns and love to do game shifting.

If you could go back in time and get a "do-over" for any one match from any tournament that you have ever played, which one would that be? Why?

If I can go back in time, I would probably go back to our home game against East Bengal. I took one free kick which was not that good, and I knew that I could have done much better.

It is the default background image which came with the phone.

I do not watch a lot of TV, so nothing specific.

Probably for hanging out with my friends!

We now know the differences footballistically speaking between the Premier League and La Liga, but which is your fav league?

It is Premier league for sure.

If you were offered the chance to play for favorite team for free but with no wages, or to accept 5 million in cash, which would you choose and why?

I will of course play for my favourite team. Because I think every player has their dream team. So, I will make my dream come true by playing there.

If you could play alongside any midfielder from past or present week-in-week-out, who would that be?