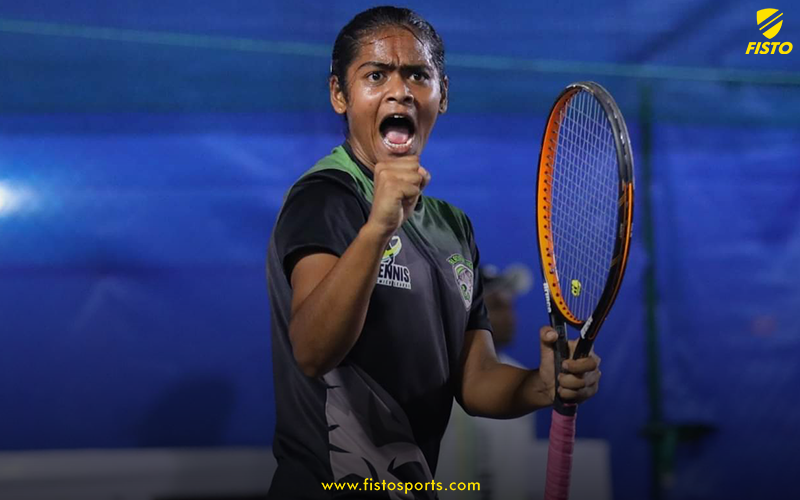 A quintessential, young female tennis player but with an added dimension of energy and technical skills, Bhakti Shah certainly appears to be a special talent.

Bhakti Shah is a young girl who just enjoys her tennis. You can see it on her face every time she gets involved in the game.

She began her tennis pursuits at the young age of 8.

It all started out while accompanying her sister to basketball practice at the YMCA and then eventually it has all led to this. Within years she was established as a prodigy and was soon winning state and national level championships.

Being a 17-year-old, it is always going to be difficult to balance your tennis career and studies. Bhakti Shah admits that she is good at studies too as she has scored 9.2 GPA in her 10th standard. She also likes reading books and keeps herself updated with the latest general awareness. This proves that not only in Bhakti intelligent on the pitch, she is equally a woman of brains when in the classroom.

The Badruka Junior College girl has stated that Roger Federer is one of her tennis heroes, but their attitude and work rate could not be any different. The biggest similarity between the two is that both of them are blessed with ice-cool composure and a blistering backhand that is ready to battle with any tennis player in the country.

With her great potential, she has won the triple crown in the National Series U-16 and U-18 and represented India last year in the Junior Fed Cup, held at Nonthaburi, Thailand. She is also an ITF grade 5 doubles finalist and Fenesta Nationals doubles finalist.

The future holds plenty of possibilities for the Hyderabad girl, but it is playing more games to improve the WTA rankings coupled with enhancing the power of serve will keep her on the straight and narrow in the short-term.

When did you start playing Tennis? What actually got you interested in the first place?

I started playing tennis when I was 8 years old. My sister was a National basketball player and I used to accompany her in her practice sessions at YMCA. Just beside the basketball court was a tennis court. Out of curiosity and inquisitiveness, I went to the tennis court and held the tennis racquet for the first time. That was my start point in Tennis. From there on, day in and day out, tennis has been a major part of my life.

Who has been your idol/role model growing up? Any other source of inspiration that you have had? Biggest influence on your career so far?

In tennis, I idolise Roger Federer. He has always inspired me to be calm and composed even in the toughest matches of all time. His technical skills of stability, flexibility, backhand are a few of the things I admire and try to apply in my routine.

The biggest influence of my career so far has been my family. They have thoroughly encouraged me to give my best in all matches. They have supported me in times of injury and failures. They were always there to cheer me up and boost my confidence to win any match of my life.

What do you like best about tennis and why?

The best thing about tennis is if you fight till the end you always have a shot at winning the game. Till the last point, even if you are losing, you have a chance of winning if you have the will too. There is always a chance of mending one is way back into the game. The winning spirit, presence of mind, staying serene in pressured circumstances is something that challenges me in tennis and makes me like it more and more.

What is your most memorable tennis moment?

My most memorable tennis moment was when I represented India in Junior Fed Cup, 2019 held at Nonthaburi, Thailand.

What else do you do? Is there something else that you do that you like to perfect outside of tennis?

Other than tennis, I like reading books, spending time with my family, listening to music and watching movies and TV shows.

If you had to describe yourself in three words, what would they be?

Are you good in your studies as well? If yes, how do you able to manage sports and studies?

Yes, I am good at studies too. I have scored 9.2 GPA in my 10th standard. Tennis is something where I spend most of my time. However, when I have free time, I just pick my books, rush to my sisters and bug them with questions. I am a curious person. They help me resolve my doubts and educate me with basic concepts. As I like reading books, I like to keep myself updated with the latest general awareness.

I am very confident while I play my backhand cross courts. However, I can work on my serve and improve it.

In how many tournaments have you participated, and which have been your best results?

I have been playing the tournament since the age of 9 and frankly I have lost a count of how many I have played till date. The best moments so far have been winning the triple crown in the National Series U-16 and U-18. Being runner-up in Fenesta National Doubles and representing India in the Fed Cup.

Non-tennis players that you admire the most and why?

J.K Rowling. I admire her the most because in spite of being rejected by many publishers she never gave up on the idea of what she believed in.

Watch the ball, move your feet and meet the ball early.

Many players have routines, habits and superstitions when the travel and play Tennis. Do you have any individual quirky things you do before a game or special item you carry with you in your bag that must go with you everywhere?

Which are your short and medium-term objectives as a Tennis player?

If your numbers came up in the lottery and you won 1 million Euro what would you buy and why?

If I won a lottery of 1 million Euro, with one part of the amount I would like to build a tennis court where I can practice as well as help other young players to achieve their dreams. For the balance amount, I would like to start an NGO and do charity for young needy children and provide them with sports and education.

Few of my go-to karaoke are Fight Song, Speechless and Hall of fame.

It is always Federer for me. My sister likes Nadal and we always have a bet on whose favourite player is going to win.

Backhand always comes first. However, volley is my second-best choice.