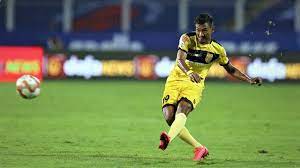 Hero ISL this season has been box office entertainment. For the first time in a while, we are witnessing a proper title race with league wide open Mumbai leading the front with 16 points. Hyderabad are only a point behind with a game in hand whilst Kerala Blasters are just two points behind.It looks like the title race will go down to the wires.

One such talent in the league who is thriving under the tutelage of Manolo Marquez's Hyderabd FC, is the 27-year-old winger Halicharan Narzary who is one of the best wingers in the Hero Indian Super League and in good stead for what will surely be a bright future at the game’s very highest level.

After making several loan spells across four different Hero Indian Super League (Hero ISL) sides, Narzary made a permanent move to Hyderabad FC on a 2-year contract in August 2020. The youngster showed us his footballing talent last season. The left winger proved his worth when his team needed him the most.

Hyderabad FC appointed Manolo Marquez as the head coach in the previous Hero ISL campaign. The Spanish coach stayed true to the club’s philosophy by promoting youngsters and giving them opportunity at the biggest stage. Narzary had words of praise for the Spaniard.

“Coach Manolo is a good coach. I’m lucky to be able to learn from him. He is friendly and is always happy to help, which is good for every player in our squad.”

The 27-year-old has represented the India U19s, India U23s, and the Indian national team. The left-footed player is known for cutting inside and leaving the defenders past him.

“I don’t think about it that way. I always try to make sure that I perform better than in my previous game. I always try to learn and become a better player with every passing year,” he added on his playing style over the years.

Narzary was terrific for HFC, who made it to the fifth position, narrowly missing out on semi-finals. The midfielders' best performance in HFC colours came against his former team, Chennaiyin FC, where he bagged a brace in a 4-1 win.

“We do discuss last season’s performances, but it is only to learn and make ourselves better. We couldn’t achieve our target last season but this season, we are determined to take the next step,” he said on the targets and expectations for this season.

Marquez set up a decent side by playing possession-based football, a sight that is sparingly used. Narzary expressed the learnings from this style of play and encouraged other clubs to follow it.

“Young players who want to play professional football should watch each game and try to learn from the players. The ISL has become an amazing platform for youngsters, providing them opportunities to display their talent. And this is really important for our country at the moment,” he stated on the impact youngsters have in the club’s successes.

Narzary’s story of playing at the top, at the pinnacle of Indian football, is nothing short of extraordinary. Nazary shared with us the story behind his footballing career that involved financial struggles, personal loss, and a resurgence in football glory.

“I was raised in a poor family where we struggled for food on a daily basis. But interestingly, even when I was beginning to walk, my father taught me football with a pomelo fruit in our garden, as we were not able to afford a football.”

“I lost my father when I was four and went through tough times, taking responsibilities at a very young age. I used to work wherever I could to feed my family while playing the game I love whenever it was possible.”

Overcoming struggles, showing dedication, Narzary is acquainted with what it takes to reach the top. Narzary expressed his views on what today’s youngsters should follow.

“I always wanted to be a good player but more importantly a good human being, because that is what I was always taught. My advice for youngsters is to try and give your best till the very last breath for your goal. Never forget your inner soul and never stop being a good human.”

The winger left quite an impression in the eyes of HFC fans, who will be expecting more from him this season. Narzary left a special message for the HFC fans who are waiting to see their club achieve glory.

“I would like to thank them [the fans] from the bottom of my heart for the continuous love and support they have shown ever since I joined this club. We all promise to work extremely hard to have a better season this time.”

As he continues to progress into a more polished product, ideal circumstances continue to offer a bit-part place in the squad, the 27-year-old has proven with HFC that he thrives upon being the main man, and current trajectory suggests he will certainly be able to do that at a higher level in years to come.