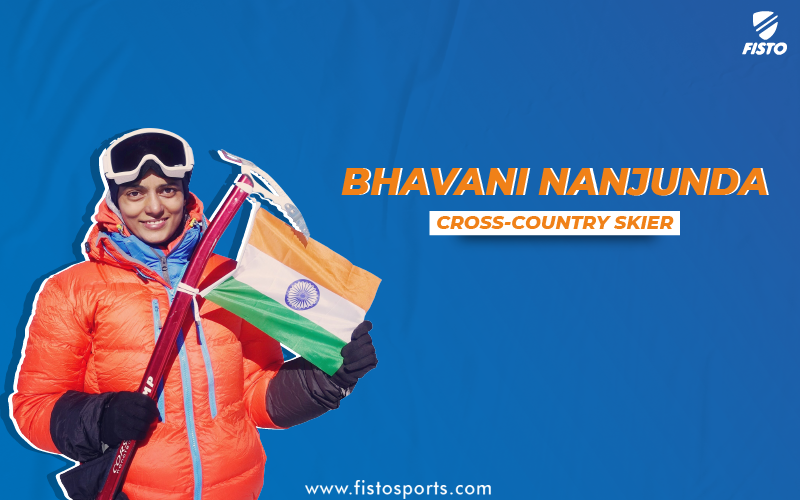 For someone who only took up the sport two years ago, Fast&Up Cross-Country Skier Bhavani Nanjunda is developing at an impressive rate, and has the potential to rise to the highest echelons of her sport.

Bhavani Nanjunda is a 26-year-old professional cross-country skier from Kodagu in Karnataka. For someone who only took up the sport two years ago, yet so dedicated to her profession, it is hard to see anything other than Bhavani becoming a success in the sport that has changed her life.

The youngster has already grabbed the attention of many within the Indian cross-country skiing community. And as easy as it sounds to a general audience, playing a winter sport like cross-country skiing is a very tough task for someone from the southern part of India, which hardly has any reputation for being a winter sports state. Once you talk to Bhavani, you will realise that it is not easy at all. It requires the ability to go past obstacles and the willingness to do something no one has ever done before.

Born and raised in Kodagu, Bhavani has always enjoyed the thrill and excitement of sports; from swimming, horse-riding, and mountaineering, to testing herself in skiing.

“I have always loved sports and outdoor activities from a very young age. Even though I played multiple sports but it was all something I learned along the way, not as a competitive sport.”

Bhavani got her first taste of skiing in 2018 when she watched ‘Eddie the Eagle’ – a 2016 biographical film about Michael “Eddie” Edwards (Taron Egerton), an underdog ski-jumper, who tackles various challenges in order to become the first participant to represent Great Britain in Olympic ski-jumping.

Bhavani quickly fell in love with all aspects of skiing so much, that, she went on to do a skiing course at the Jawahar Institute of Mountaineering and Winter Sports (JIM&WS) in Jammu and Kashmir in 2018. Not only that, but she had also finished basic marks and key courses before completing the intermediate skiing course – all in the same year.

Later, she underwent skiing three months of training in New Zealand and has been qualified as an International Skiing Instructor.

On inspirations and opportunities

On being asked why she chose cross-country skiing when she could have easily chosen Alpine Skiing, a sport in which courses and training are easily available in the country:

“When I started skiing, I was watching the 2018 Winter Olympics and there was this one female athlete from Norway named Marit Bjørgen. Her repertoire was so highlighted during the event. She was 37 and a mom participating in the Winter Olympics. Watching her winning medals in cross-country skiing and becoming the most decorated female winter Olympic athlete made me feel infinitely impressed, particularly cross-country skiing.”

“From then onwards, I was following her journey even though I did not know what cross country skiing was because you don’t see that in India.”

Bhavani used to (still does) browse the Internet for hours learning the technical know-how, training drills, techniques and even down to fitness exercises related to cross-country skiing. She learned to manoeuvre the poles and a few of the tricks within 15 days with the help of Jawahar Institute of Mountaineering and Winter Sports instructors.

“In 2020, I joined Jawahar Institute of Mountaineering and Winter Sports (JIM&WS) as a ski instructor. I used to observe the Indian army skiing team. And one day, out of the blue, I was presented with an opportunity to try cross-country skiing.”

“The principal and the instructors at JIM&WS were very supportive from the beginning and told me to compete in the national event. I was dead nervous and I felt a bit of pressure butwhen I saw an opportunity to try cross-country skiing, ‘I thought I will pop in and give that a try.’ That was it, I just fell in love with it.”

During that time, Bhavani worked as an Alpine instructor in the morning and practice cross-country skiing in the evening. And subsequently, learned the sport within 15 days and braced herself for the national competition in 2020. Even though she did not make it to the podium but she was content with the experience she has gained.

A turning point in Kashmir

Learning and grasping the nuances of a sport in 15 days and competing at a national event was a big thing. Particularly in a sport like cross-country skiing dominated by athletes from Himachal, Kashmir, Ladakh, Uttarakhand, or the ITBP athletes.

The desire, the ambition and the work ethic to excel in the newfound love, and make no mistake, a few months later, she fine-tuned her performance to win two bronze medals at the 2020 Khelo India Winter Games which took place in Gulmarg, Jammu and Kashmir.

The following years saw her adjusting to a new life with multiple lockdowns due to COVID-19 and keeping up with cross-country skiing wasn’t easy given there were hardly any tournaments, but her true breakout came in 2021 when she bagged a gold and bronze medal in the Khelo India National Winter Games, held in the resort town of Gulmarg.

This was the first time she was able to beat ITBP girls, who were trained properly for years. This was also the first time a civilian from South India has won a medal. This sense of novelty awakened a new spirit in her.

“I was really happy with the result I got last year. A series of good performance saw the Indian Skiing Association registered me as an Indian athlete. Last year, I qualified to represent India in an international competition. Now I have taken this sport seriously and If I have to pursue this as a main goal, I have to give up a lot of things. I have quit all of my jobs as a mountaineering skiing instructor. Now I am more than committed to this sport.”

Before not too long, Bhavani, was climbing mountaineering expedition. Scaling the Mount Elbrus in 2018 with an Indian record time off in just over 8 hours, while also working as a guest instructor at Himalaya Mountaineering Institute, Darjeeling, before deciding to try skiing. She said that she started skiing as an add on to her mountaineering skills but little did, she knows what the future had in store.

Fascinated by the detailed account, I wanted to know what was her first expedition and what did she learn from it.

“In mountaineering, my first expedition was mount Rudugaira Trek in Uttarakhand which I did through NCC back in 2014.”

It is not always easy being a South Indian who excels in the field of winter sports. Bhavani is also the first woman to complete the tough First Grade Training at Himalaya Mountaineering Institute climbing tough peaks like Friendship in Manali and others in Uttarakhand, Sikkim and Leh.

When asked about some of the struggles she faced behind the scenes during her formative years, Bhavani responded:

“Obviously, being from South India to try mountaineering was completely a different experience. And being a South Indian, a lot of people used to judge me by saying, ‘Will you be able to do it kind-0f-thing?’ I think I should thank each and every one of them because they kept questioning my ability and that is what kept me motivated to do more and finish the task whatever I have taken up.”

Her time in cross-country skiing has been short but her advance has been rapid. There has undoubtedly been much progress since 2018, a now thriving professional scene, Bhavani wants to keep learning and compete as much as possible, and that will improve further in the coming years.

Even though the winter sports still trying to establish itself with the masses. Her composure and the way she has accustomed to the top level of cross-country skiing has been admirable. The youngster has not got carried away with the appreciation she has received and looks to keep improving.

“I have to improve a lot of things, particularly refining my technique and endurance. I will also be training high-altitude training soon.”

The physical demands of cross-country skiing, should not be underestimated. So how does Bhavani prepare herself for such arduous conditions?

“I don’t have any coach here in India for cross-country skiing. Luckily, I was able to train for two months in Norway and got some good coaching.”

With five medals already secured this year, two silver medals in 10km and 5km races in the National Winter Biathlon Championships and one gold and two silver medals in 1.5km, 10km and 5km race in the National Cross Country Skiing Championships held in Gulmarg, coupled with two international FIS events participation under her belt, she knows what is to come, and that can stand her in good stead.

The Fast&Up athlete has unwavering confidence and belief in herself driven by the support of her family, and fully expects to be in the 2023 Nordic World Championships next year.

“I am very lucky to have an amazing and supportive parent. They have always been very supportive with any decision I took from starting my mountaineering career to skiing career.”

2022 is shaping up to be a busy year for the Kodagu native. Her plan for this year, and beyond, is simple: to take risks and challenge herself. There certainly is no arrogance from Bhavani but a confidence that is necessary for success.

More importantly, Bhavani is not afraid to stick her neck above the parapet and embrace any opportunity coming her way. And, to put it in her own words, “it’s quite exciting.”

“I just want to compete in a few more FIS races as often as I can, test myself with different styles of opponent as regularly as possible to collect FIS points till 2023 January and in February, we have Nordic World Championships. That is my target for now.”

This all shows just how far Bhavani has come since her first foray into cross-country skiing. If she keeps up her progression while diversifying her game, she could rise to the highest echelons of her sport.

Let us give you a very last round of flash questions!

Do you have any hidden talents?

What is your favourite place you've travelled to?

If it is foreign, I would say Norway and if it is India, then it is Darjeeling.

What is the weirdest thing you've ever eaten?

I wouldn’t say weirdest but when I was in Russia, I had ordered Octopus without knowing what it was.

If you had to pick a summer Olympic sport what would it be?

What is the last thing you shopped for?

Skiing. For the past year. I have been investing in skiing and nothing else.

Biswamitra Chongtham: 'I want to be a world champion'