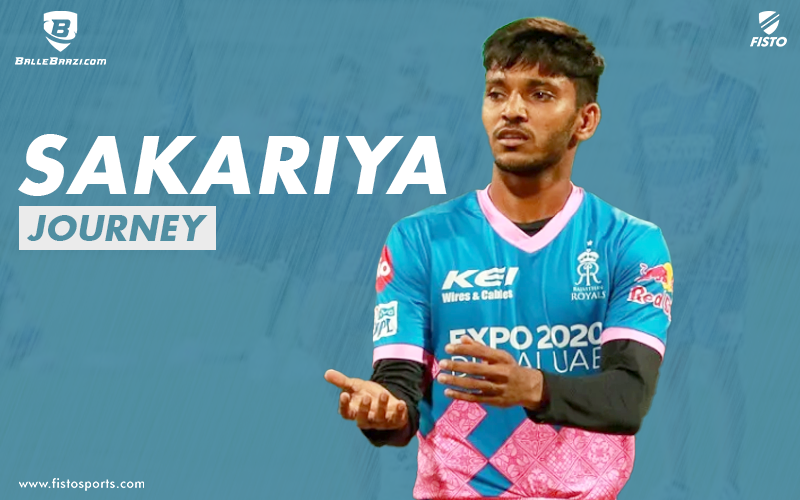 When we look at the Indian cricketing landscape, Cricket has been caviar for most people of this nation due to its expensive hierarchy. But then due to great scouting and talent finder like IPL, prospects like Chetan Sakariya who has overcome a lot of obstacles in his nascent career has found some spotlight. Chetan Sakariya, unlike David, has to defeat many goliaths like poverty, family background, and injuries, but one thing that is a constant for all great athletes is that they don’t bog down, Instead they fight and rise hard.

A Star is Born

Sakariya hails from Bhavnagar in Gujarat. Chetan Sakariya was passionate about the game from his young age but couldn’t afford the time nor luxury to attend cricket coaching. While kids of his age were playing games and carrying on with their lives, Chetan has to work for his family. Sakariya’s father was an auto driver who couldn’t provide for expensive training institutes. Chetan’s father, just like a typical Indian dad, advised him the game is for the people with a great amount of money and time to invest. It was his Uncle who helped him cover his expenses. Sakariya used to work in his shop part-time for his aid.

Sakariya got his first break when he got selected for Saurasthra U19 side to play in the COOCH BEHRAR trophy (2016-17). He performed exceptionally well picking up 18 wickets at an average of 22.44 including a 5 wicket haul against Karnataka. Saurasthra Cricket association rewarded his work by sending him to MRF Pace Foundation for a brief stint with legends like Mcgrath. This is a place where he learned the limits of his Bowling action and the importance of understanding his physique to avoid injuries. The foundation proved to be a bodhi tree for him where he nurtured his talents and tried to increase his pace for better results.

After his selection at MRF pace foundation, he was worried as he didn’t have proper kits and shoes for the trial. His Saurashtra teammate Sheldon Jackson helped him with the problem. The story goes by that if Chetan could bowl him out then Jackson will get him a new pair of Spikes. So Sakariya found a good friend and a confidante in Jackson.

From a raw pacer to his stint at MRF, he has transformed into a colourful bowler with a variety of tricks. After striving hard, he got a chance to prove himself in the 2018-19 ranji trophy season. He was picked as injury replacement for Unadkat and boy!, he performed well with wickets tally of 29 at a healthy strike rate. Sakariya is pretty good at swinging the balls either ways hitting perfect line and lengths. He stressed himself to work hard and ended up in an injury from training in MRF, having an average Ranji season next year, which Saurashtra won the trophy.

After the injury crisis, the pandemic started, shattering the dreams of millions, with Sakariya one amongst them. He got a chance to prove himself In the Syed Mushtaq Ali trophy where he proved his worth by chipping in with crucial wickets at a good economy rate. As the scouts stood impressed by his execution, he was selected as a net bowler for RCB before bagging a crucial contract with Rajasthan Royals.

Sakariya is pretty close to his brother, they were like Siamese twins with sharing everything in between them. A great tragedy struck his family when his brother committed Suicide when Sakariya was playing SMA trophy. He was only informed at the end of the tournament not to resolve his mental strength during such times. The amount of anguish and pain one experiences broke him to pieces. When you lose a shoulder that has been around for years is hard to digest, But he has a great mental strength for such a young kid to overcome such an event and perform in IPL.

IPL has become one of the greatest stages where young talent like Pandya has proved their mettle before called up for National time. So the time came for Sakariya to show his prowess in the debut game against Punjab. He held his nerve and bowled an excellent spell bagging three wickets with the prized scalp of Rahul and Agarwal. He continued his impressive streak against CSK bagging 3 wickets with a wicket of Dhoni (which he valued like oxygen). After the suspension of IPL, his dad passed away due to COVID, leaving his son in tatters. You have been a great example to millions of aspiring youngsters, that in the end, talent and hard work succeed. His Father and Brother will be happily looking at him from the heavens.

Can Chetan Sakariya find a place in Team India?