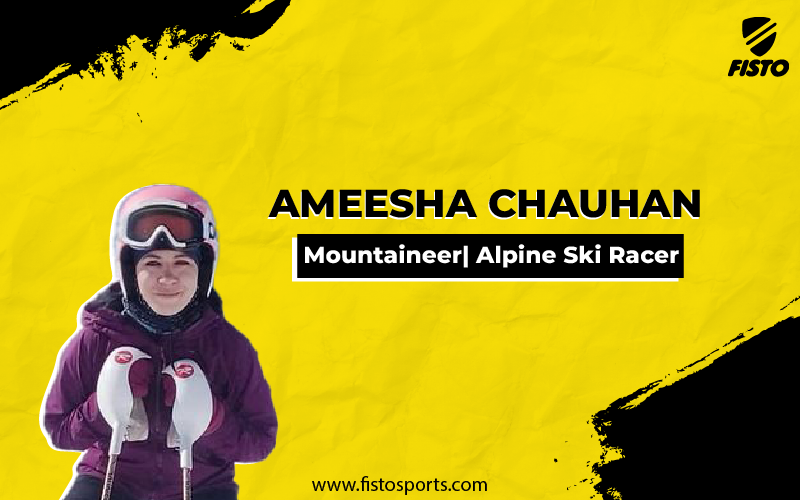 The Indian mountaineer-cum-Alpine Skier on the big risks and bigger thrills involved in the sports she loves.

Sport, especially mountaineering or/and winter sports, is littered with stories of women hiding from their true selves for various reasons. But we have interviewed many youngsters who have told us that winter sports gave them an identity, somewhere where they belonged. Ameesha is no different, the Alpine Ski Racer has been making her mark in the unheralded sport. Along the way she has gained the highest respect as an exceptionally skilled mountaineer, made many friends and survived the deadly Mt Everest ‘traffic jam’.

Defying all odds, Ameesha reached the top of the world on 23rd May 2019. She even passed by several corpses en route to the summit and encountered a traffic jam during her descent. But that didn’t stop her constant vigour as she continues to keep the journey intact.

The Tehri Garhwal girl, also climbed Mount Kilimanjaro, the highest peak in Africa in just over 54 hours. In doing so she became the fastest Indian climber to scale the 5,895 meters peak, and made her way into the Asia book of records.

Ameesha has been passionate about mountains and skiing for a long time. She lives and breathes mountaineering and skiing. She is also a software engineer. Over these years, the youngster has demonstrated that nothing is impossible for women if they make up their minds and strive hard to achieve that. And there is no shortcut to success.

The talented youngster talks with us about her connection with the mountain and the passion she radiates for skiing.

Hello Ameesha, we are delighted to interview you. Your journey of surviving the deadly mount Everest traffic jam to scale the summit in a second attempt within a week, that too at the world’s highest peak mount Everest something very touching and heart-warming, a local female skier and mountaineer climber from Uttarakhand who is one of the most exciting competitors to watch in the country – gaining heights in many senses of the word. Let’s begin with the basics, what does adventure or skiing and mountaineering mean to you?

Thank you! First of all, I would like to thank you. Well, in simple words if I am told to describe what skiing and mountaineering mean to me, I would simply say that they are like oxygen to me. As one can't live without oxygen so can't I live without these things. It was definitely growing up on a hill station area as you’re surrounded by nature and the water all the time.

Can you tell us about your first ever mountain climb? What inspired you to become a mountaineer?

Before becoming a mountaineer, I took part in a small trek and it was about the height of 11000ft. I guess that was the life-changing moment of my life. As a child, I had a dream to touch the sky and wanted to become a pilot but couldn't fulfil that. And later, I decided to climb the highest peak in the world.

How did you discover the skiing passion that takes you to the snowy hills? And why skiing, you could have chosen other sports too?

I have always been an adventurous girl. And talking about skiing it all started when I decided to go to Kashmir for skiing courses and I did all the three courses from a reputed institution IIS&M.

So, I found skiing quite interesting and I continued skiing and took part in other events like National Games, and Khelo India Youth Games. I am also interested in other sports but for skiing my love is unconditional.

Do you have an idol you admire and look up to?

Ms Bachandri Pal and Dr APJ Abdul Kalam. They both have been my idols always. As their success story is what motivates me the more.

Though both skiing and mountaineering are such demanding events, they are fairly different worlds. How have you managed to live, breathe, and succeed in both?

As you already mentioned that both are fairly different worlds and that's what makes it easy for me to manage. Skiing is a winter sport and mountaineering is something which I do in summers.

Talk to us through the moment when you decided to climb Everest for the first time?

It was in 2016 when I decided to climb Mount Everest. I was like I have to do it as it was one of my dreams.

You have had a lot of incredible adventures. Which has been the most memorable?

Well, honestly speaking my every adventure has been so memorable but the most memorable one is the experience of climbing Mount Everest. As I tried twice to climb it and have been as close to death as anything. But in the end, I did it.

Are you ever scared when you’re on a climb? How do you tackle that fear?

Well, you might have heard the famous line DARR KE AAGAY JEET HAI, that's what I believe too.

Do you have a hidden talent, and if so, what is it?

What kind of advice might you have for young girls who are considering mountaineering or winter sports out or are curious?

Just follow your passion! If you feel like you want to try something, you should figure out a way to do it. Good things will come of it when you can follow what you feel is good for you. There are so many circumstances that I am glad I was brave or crazy enough to do something that by my means I didn’t think that I was prepared for. Sometimes we just need to not take ourselves too seriously and be okay with a challenge. If we lose or fail, there is so much we learn still.

What lies ahead for you this year, and what are you most excited about?