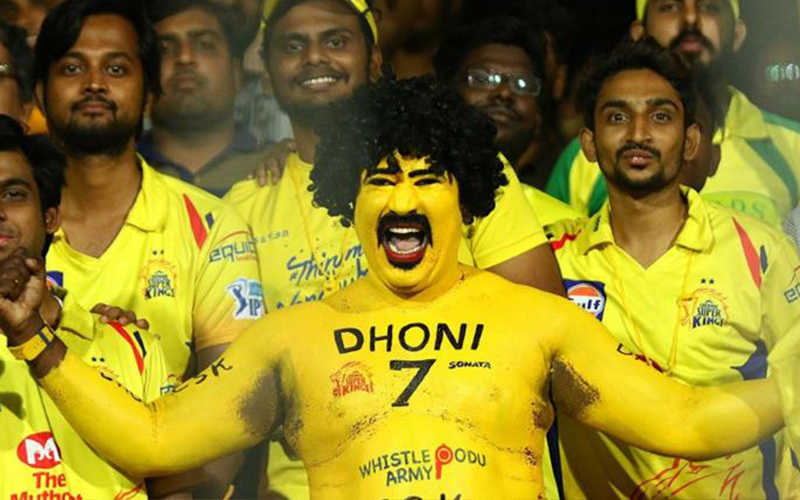 What could be more disappointing than awaiting a year-long for a tournament just to see it being called-off at the eleventh hour?

While the question goes well with a youngster brimmed up with zest for to play a most awaited game, it has no lesser impact on the men, who cheer in merry for every boundary and groan with a frown as a wicket falls.

They live the same game with the team in the stands, despite the scorching heat or the growling winters. Though many a times they remain unacknowledged, there could be nothing that motivates the men in play than the humongous support shaped by sheer love that comes from beyond the ropes.

With the epidemic on a rapid unfold taking lives like nothing before, all the sporting events across the world has been brought to a hold, with players and fans shut inside their houses. While all the tournaments across the world being called-off, the Indian Premier League is on the verge of getting on the list, with the postponement being the only announcement made thus far.  With Cricket being the heart of the country, IPL is celebrated no less than a festival with cities donning the color of their home team. Despite the heavy losses the cancelling incurs it leaves a much heavier impact on the fans who are on a wait for the tournament all year.

‘Health and safety is the first and foremost’

While the cancellation leaves different marks on different individuals and different teams, let’s hear what it actually means to the most loyal fan club the “Whistle Podu Army” who boarded the “Whistle Podu” express and travelled all the way from Chennai to Pune to evince their support loud amidst the home team fans.

“On a fan perspective it is really disappointing, but on a bigger perspective health and safety is the first and foremost. I believe health should be the biggest concern where the focus lies for all of us at the moment and on a bigger Point of View it is obviously health and we should wait and see where this goes” says Prabhu Damodhraran, the President of the Whistle Podu army, the official club of the CSK, in a telephonic interview with Fisto Sports.

The men in yellow thronging the stands are an inevitable sight despite the venue. The humongous fan following for the team, led by the country’s favorite from the front, that held the team through its bumpy ride including a two-year ban, knows no bounds and are considered one of the best thus far.

“As a fan it is really disappointing because we were all on a crave to see Dhoni walk into the grounds, leading the team. That was the most awaited moment for every CSK fan since the heart-breaking run-out at the World Cup Semi-finals.”

“If you see, he has not been in the blues also for quite a long time now, it was quite a big build up that ended up in a disappointment, but taking into account all that is happening around the world this is not something to be worried at the moment” he adds on.

‘CSK is all about family and bonding’

Chennai that is most often regarded as the stalwart of the sporting spirit, reverberates Yellove, themed CSK not just in the stands, but throughout the city during the season. And in the eve of the match, the stands of Chepauk led by the Whistle Podu Army, which was founded in 2016, shortly after the club was suspended, reverberates “CSK….”, with love in support of the team.

“With I,J,K Stands opened this year, which means an addition of 12,000 more fans, we expected a  full house show.  CSK is all about family and bonding, not just within the players and staffs but they also look fans as a part of the family, that was keeps CSK apart, they extend the bonding they share within the team to their fans and treating them as family which is incredible. And this year, with a lot of crowd coming up, we had a lot of things planned up with the fans as a fan club, but things are not in our control.” he says.

With the crowd being the major issue, a closed-door IPL seems to be one of the options on the plate for BCCI and the IPL Governing Council.

“A closed doors IPL was an initial suggestion given, but I think it also falls under stake at the moment. It is very disappointing because, IPL is like a celebration that brings the CSK family together, and whenever the season comes up the whole city goes yellow, it is like a festival the whole city celebrates.  It will be missed. And if at all it happens in closed doors also we won’t even be able to get together to watch it. Even at the matches played away, we see half the yellow crowd there. If it happens closed doors, fans can’t get together, we can’t cheer together. Unlike other teams we have a very united fan following. We will not be able to give the same support but it is too early to tell”.

With Social media still opening an option to proffer the support, he says the whistle Podu Army will be extending the support in every possible way through online buzz.

“It’s gonna be watching at home, we will definitely make some buzz online. Whenever anything comes up Whistle Podu is always the top trend. We will be making a lot of noise on social media but all the excitement surrounding the ground and the buzz we create in the stadium will be missing.”

What less could we expect from the fans who did a “Save CSK” campaign outside the stadium to oppose the suspension.

And on being questioned about what will be missed the most, he exults Dhoni.

“Of course, Dhoni. You saw the crowd that turned up for the practice session, that was the kind of craze and that is probably the biggest prospect we’ll miss. Watching Dhoni lead the team is like the biggest thing for us.  Performance falls secondary, that was the moment we’ve been waiting since the last World Cup. His comeback was the most expected one”

“We felt the team was better composed and all the areas to be covered with experience. Ngidi was back and there are couple of new additions also. We felt we had a strengthened oversees pace bowling and strong spin attack with Chawla coming in and comparing to other teams we felt we did not have any weaker departments on a comparison with other teams. CSK is always consistent so we expected they will make it to the play-offs for sure and let’s see where it goes from there.”

IPL is currently filled in with a number of stumbling blocks, considering the participation of foreign players due to the Visa curb and the impending threat at the moment but anyhow he feels the interest and the entertainment following the IPL will not be deterred despite their absence.

“It will still be interesting with domestic players and our senior players coming up, but I feel the competitiveness aspect may be slightly lacking. The absence of oversees players will have an impact on the team, as some teams may have ascertained certain positions based on their foreign attack. There won’t be balanced teams but I still feel it would be interesting with our stars taking the center stage.”

Indubitably, he refers the, 2018 comeback win, to the best wins owing to the emotions attached with the win,

“I would consider the 2018 comeback win as the best for many reasons, firstly the team was coming back after a break, fans were waiting, and there were lot of situations going around. CSK were trolled with names such as Daddy’s army, but MS and the team let the game do all the talking.”

“The season gave us another unforgettable experience, “the whistle Podu express.”

“It was something like we have never experienced before. The travel was a memory etched for a lifetime. We were a group of 1200 fans who got together. It’s too much to put in into words. We give all the credit to the management for giving us such an unforgettable experience. CSK values their fans first. They gave an opportunity and all the fans jumped on.” he recollects.”

One ray of hope

With high hopes of seeing the IPL sometime around the end of year when the CSK family can come together and whistle their hearts out seeing their Thala in action, he waves a good bye.

“Considering the current situation, we completely understand health takes the immediate priority. we are not expecting anything in the immediate next. But it would be nice if they can have some window to place the IPL before the year draws to an end. Firstly, we would prefer a full IPL even if it is closed doors. If that seems unfeasible at the moment then a truncated version with limited games and venues, sounds like quite a solution as something is better than nothing.”

“There are lot of other aspects also considering the other factors the BCCI and the Franchises will have to go through. There is the T20 world Cup also coming up. It is completely up to them, but still, there will be nothing better than seeing the IPL some time the year. Let’s see how it turns out, something like this three months ago was out of the box, may be something like that happens sooner and situations get reversed” he signs off.