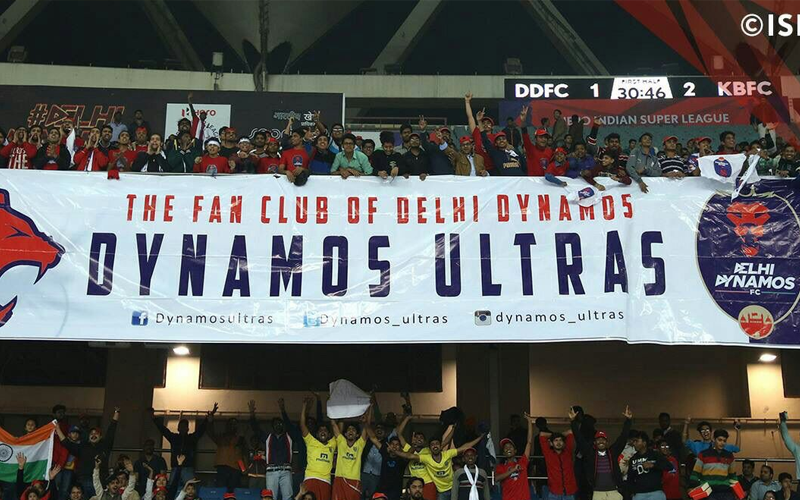 Dashed dreams and dawn of a new destiny: History of the Dynamos Ultras

For a huge lot of people, Delhi Dynamos was the beating heart of Indian football; as far as Dynamos Ultras are concerned, the Jawaharlal Nehru Stadium was their holy ground. The defunct-Delhi Dynamos supporter group had gone through a lot in the recent years – from broken promises and broken hearts – saw the club rebranded as Odisha FC following their decision to shift base to Bhubaneswar from Delhi.

The club and its supporters has had its up and downs in its half a decade history, the downs coming through events off the field whilst the football on the field has gone from strength to strength.

Football is about more than money, however much lucre has come to shape the beautiful game. With a new club, not only to support but also manganing, the Dynamos Ultras breathe a new dawn to change things for the better and bring the lost blory back to Delhi.

The story of what the death of one football club means to its supporter.

2015-16 season of the ISL marked the emergence of one of the most vociferous football fan clubs in India the Dynamos Ultras.

The venture was initiated by 4-5 like minded football enthusiasts which transformed into a movement that was ultimately carried forward by true football fans which has continued till the present day .

Dynams Ultras has always showcased its unique identity in the stands and has always stood out in the crowd.

Filling the maximum number of seats in the stadium, cheering for their team with utmost passion and dedication – the Dynamos Ultras Family has played a key role in the overall development of football in the National Capital.

This season was important in different terms for the fans because we included drums, chants and anthems to support our team which definitely worked out as we finished third in the season with 21 points.

The team trying their best on the field and we supporting them in the best possible way.

Our first handmade banner was also introduced in this season promoting our unconditional passion for the game and love for the team. The artist inside each one of us truly showed up.

Our creativity was also shown in the chants we did for the team , one of the most famous chant we created was:

Our emotions screamed out through these chants, we had a great season for the second consecutive year and finished on top of the table alongside Mumbai City FC still finished third in the playoffs.

This season also marked the first move in expanding the Ultras by introducing fan jersey with the trademark red and white t-shirts which were not the primary colors of Delhi Dynamos but surely the ones of Delhi United FC , membership also included wrist bands, face mask and a lot of enthusiasm. The army was growing to make Delhi their own .

Our aim was clear to perform better the next season and with these hopes we walked into season 2017-18.

Delhi Dynamos started the 2017-18 season with a bang by defeating FC Pune City 3-2 in a thrilling game, but things took a turn and Dynamos went for a 9 game winless streak. We suffered 6 defeats in a row followed by 3 draws. Rohan Sharma took charge of the club from mid-season.

The game for glory and authority came i.e. Bengaluru FC vs Delhi Dynamos. We were tensed and had zero expectation of winning the game. Bengaluru FC were the table leaders while we were last. Interestingly we had people from Denmark and Hong Kong with us in the stands. We were hoping to win the game in front of them. Things were not in our favour as our main goalkeeper was out due to injury still we picked up ourselves with the same old enthusiasm and went to the stadium. We started supporting our club like always and things started to fall in place with the first goal.

We responded to the shameful act shown by West Block Blues (posting picture with caption: Delhi conquered before the match) by forcing them to stay quiet throughout the game, the final score was 2- 0 and the joy with which we celebrated the win even forced the foreigners to dance. We exchanged jerseys and club stickers which were then posted on our hand made banner. That match was surely a one to remember and worth all the efforts on and off the pitch.

The people from Hong Kong were from Ultras bluewave (kitchkee’s fan group). They invited our key member Deepesh to visit the training area of the Kitchee’s in Hong Kong.

The Kitchee fans and Ultras bluewave then invited our key member Deepesh to visit the training area of the Kitchee’s in Hong Kong.

This season wasn’t a great one for us as we didn’t even qualified for the play offs and we ended at the 7th place on the points table.

2018-19 season was not a season we would like to remember because the team wasn’t performing well and the fan club had issues to face related to the club. Rumors had started to float around by the second half of the 18/19 season. According to them, Delhi Dynamos would shift its base to Odisha next season.

A sense of fear was beginning to rise in our minds. We were all worried that the club which had become like a family to us would get dissolved by the end of the season. Time passed by and the rumours kept on growing. Rohan Sharma had completely commercialized the club! He didn’t retain a single player from the squad that qualified to the semi-finals for two seasons in a row, not even the coaching staff. To add to our agony, he did a fraud by lying to us about opening a residential academy which apparently didnt happen. This ultimately resulted in breaking the core of the team and coaching staff. The only greatest contribution he did was breaking the team into pieces and completely shattering the dream of many individuals of seeing their own club becoming great.

As a desperate effort to save our club, we launched the campaign ‘#SAVEDDFC’. After a while, it was more or less evident that the club would change to Odisha FC and move to Kalinga Stadium, Bhubaneswar. Our fears turned into reality. Devastated by the news, we never let the feeling of disappointment get to us. When everybody thought Dynamos Ultras had become a lost cause.

Posters created by Aman Rawat played a great role as he expressed his feelings by making these posters and explaining our situation and the sense of loss, damage and pain. It’s very well said not all hero’s wear capes!

It is always hard to lose something you love but despite the pain, one has to move on. We got past the sorrow and took it upon ourselves to change the face of football in Delhi. Football in Delhi has had a downfall lately. Low attendance and pollution in the winters were part of the reasons for which Delhi Dynamos left the capital city. Now, with the management of Delhi United FC in our hands and a constant support from Minerva FC and Mr. Ranjit Bajaj the great football revolutionist. We aim to change things for the better and bring the lost blory back to Delhi. Our idea would be to make the concept of fans managing a football club reach out to more and more people in the city. The road ahead is tough but so is our mentality. Jai ultras!