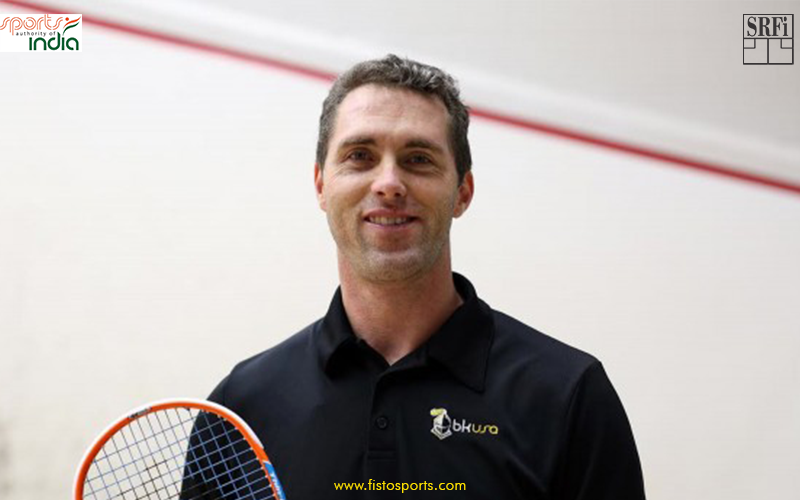 Two-time world squash champion and former World No.1 David Palmer shares some of the innovative techniques he uses in coaching elite athletes and his experience as a player in an interactive online session.

With no upcoming sports schedules pressing the calendar, due to the outbreak of the global pandemic COVID-19, the Squash Rackets Federation of India (SRFI), makes maximum use of the abundant time available, by organizing online interactive sessions amongst the various groups of the Indian Squash.

The 16th live session on the series was conducted yesterday on the Cisco Webex meeting by Squash Rackets Federation of India (SRFI) under the banner of Sport Authority of India (SAI) and it saw the Former World No.1, David Palmer interacting with SAI coaches, sharing his coaching techniques and his experiences on working with different athletes. David Palmer on retiring from his prolific International Career including a two time World No.1, has set on his second journey with the sport as a coach sharing his teachings with the younger generations. He is currently the coach at the Cornell University and has worked with players who are amongst the top 30 of the world.

In the online session he revealed the innovative techniques he uses in coaching elite athletes and shared his experience as a player.

He explained to have split his coaching structures into four core modules, Technique, Physical Fitness, Tactics and mental fitness namely and all of his programs to have been devised  on the base of those fundamentals.

Adding to it he also emphasized on the importance of training per the requirement of the athlete as each one of them are different and one thing that works on certain athlete may not work of a different. And so he expressed the need to study an athlete completely and make schedules that cover the four modules in a way that suits them the best.

He spoke about the grip, racquet preparation, swing size and some of the other techniques he uses.

He regarded getting the basic techniques right at an early an stage an utmost priority. “85% of the athletes will have the techniques same. 15% of them will have a unique technique and it should handled accordingly. Swing size is something that is very important and I would advise a high swing, as it would be easier to pick the ball from anywhere.” he said.

He also mentioned the advantages of straight drives rather than using cross courts and insisted on avoiding it as much as possible.

“I use a technique. I have a specific target zone and I make every strike a hundred shots on the zone. It helps me identify better as elite players will be able to make 85 of them on the spot. It’s a very good exercise.”

He considered fitness to be one of the most important aspects .When it comes to fitness, he considers how long a player can sustain should take a priority over the speed and the quickness factor.

“At the Junior levels a player will have to play matches back to back, to win a tournament the athlete will have to play 5 to 6 matches on a day which will demand a heart rate of 189-190. So its all about how long can a player sustain and go on in the heart rate rather than how quick he can come to it. That is the key factor training should be based on.” he said.

He also insisted on making fitness sessions creative by adding on variations to the training and he listed some of the drills he uses,

“It starts slow and the level keeps increasing,. Its not easy to keep up the same level as it shoots up. It challenges mentally also. It’s not when you know you have to give your maximum. I would consider a level 14 a good one and Elite players should have around 17.”

“This is nothing but your feet and mind talking. Variations of different kind like doubles and cross skipping is an add on.”

“This is a total upper body exercise. I would consider doing 300 in 10 minutes a good one.”

“Warm Ups and Cool downs, Maintenance and looking after the body, Core and stability and flexibility, ankle stability is equally important. Maintaining balance when at speed is vital. When I look at the top players they are not just about the game.  There are many extra things they do on a daily basis that adds up to them. Balance when in high speed is very important. If you cant control your body, how can you control yourself?”

He also said combining all of them on a training would be really challenging for a coach, but  a coach is responsible to bring the challenge and experience on a player’s training session.

Read: Hannah Ridgard-Mason: ‘Seeing Squash in the Olympics would be the biggest game changer’

He attributes the development of technology to have helped in analyzing statistics.

“Routines and tactics go hand in hand. I just realized my heart rate was too low in the rallies I lost. Watching matches, videos, analyzing statistics and re-watching matches are the factors that help a player grow from Juniors to PSA professionals.”

He also further mentioned Scores, T-Positions and hitting zones to have been the key Indicators to be helping the players.

“I prefer really high T-positions over every other position and targeting on the hitting zones.”

“I insist coaches to have fixed training goals everyday and ensure these are there in the tactical part. The true test will be on the pressure. A successful coach  should fit  all of this in the player’s routine.” he says.

On being questioned about his mental strengths he told what differentiated him from others was that he had a plan B, with which he could win on a bad day.

“I could win on a bad day because I had a plan B always. On good days I definitely win, but there are days that are bad and when everything doesn’t work your way. It is frustrating, but I was determined and fought back  and it is all about how I would turn the tables and win which made me consistent. Finding measures to do good on bad day is what mental strength is about.” he said.

On raised a question on the number of hours  training session can range between he said,

“It’s always quality over quantity.  Its not about how longer, bit its about how qualitative a session is.  Its important to have a plan in place, a weekly plan preferably, which should be player particular and it should target on all the four areas.”  he said.

“Writing things down helps. Goals should be challenging but realistic.  A coach should re-assist it and make it harder from time to time.” He signs off.