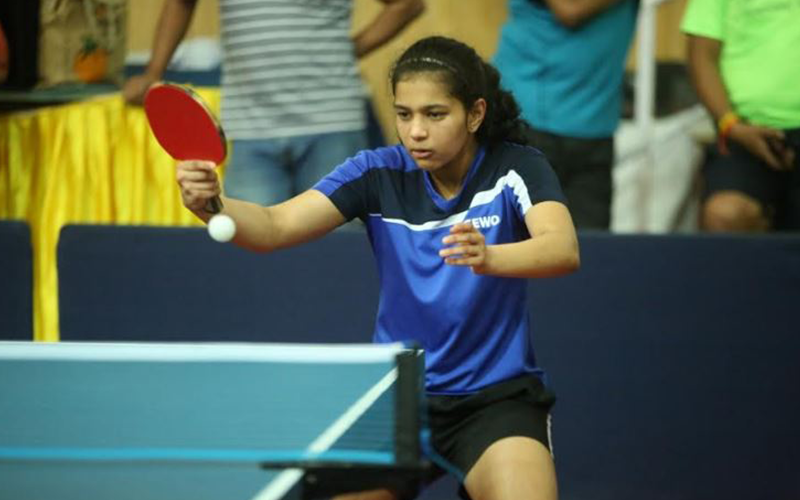 Hailing from Maharashtra, Diya Chitale is a 16-year-old Table Tennis prodigy with astounding records at both National and International level of Junior and Youth Table Tennis.

Aiming to win a medal for India at the Olympics, Diya recently crowned championships at both the Juniors and Youth Category in the recently conducted National Championship. Earlier in 2018, she was also ranked No.4 at the U-15 World rankings.

Juggling between her academic and her frenetic sporting schedule, the 16—year-old has been training in Germany and Japan to hone her skills and emerged youngest Indian to have featured in the German league. Owing various accolades to her name, the Diya Chitale was also selected by the Olympic Gold quest as a part of their Junior scholarship athlete program and the ITTF World hope dreams.

In an exclusive interview with Fisto sports, Diya shares her TT journey so far, her source support and goals for the future and training during COVID-19 lockdown.

It’s been quite a difficult few months, how have you been spending your time and keeping yourself in shape?

Yes, it has been quite difficult. I have a robot with which I can play, so I have been going on with my practice. I first started it as a hobby, when I was eight years old. I won a bronze, the first time I played at the district level and it just kept me going. My turning point was winning the silver medal at the U-12 National Championship in 2014. It was my first individual medal at the National Championship. And that is when my hobby got converted into passion. And ever since there was no looking back.

How do you manage to juggle between sports and academics and how supportive is your school of your sporting career?

The support from my school has been incredible. Last year I was in 10th standard and I studied in a school called Arya Vidyamandir, Bandra.  I also train abroad in Germany for about 3 to 4 months a year and I missed out a lot on school. I even missed out on my terminal and preliminary exams. My school was extremely supportive and they arranged separate exams for me when I was available. My teachers also volunteered to help me whenever I needed. The support I gained from my school was overwhelming.

Can you tell us about your training in Germany and Japan and the kind of influence it has on your game and how different is it from the Indian style?

In Germany I train with my coach Peter Engel. He’s highly experienced and possesses extensive knowledge about every aspect of the game.  So I went there to improve my basic technique. I also travelled to Japan last year because the style of playing between European and Asian countries is completely different. Countries like China and Japan are undoubtedly dominating the world TT. At young age I don’t feel the gap between players from around the world and those from China and Japan. But I think with age, the gap will expand and my predominant aim is to minimize the gap as much as possible. That’s why I went to Japan. I play with practice partners over there and get used to different style of players. Who has been your support system, supporting you throughout?

Definitely my parents, they have supported me throughout right form the scratch.  They have never exerted any kind of pressure on performing on both sports and academics and have always insisted me to enjoy and give my best. So that was something that really helped me go on. Then my coach Sachin Shetty, in India I train with him. He travels with me to Germany, so that I can continue the same kind of practice over there. He also coordinates with my German coach and ensures I do the same thing there and here.

How did you feel on winning medals at both the Junior and Youth Nationals, did you expect it?

I did not expect the win. The year was full of ups and downs for me but my preparation for the National Championship was very different. I just went on and played my best every match one by one. I had to play against the Top seed in the Junior category and I had lost against her before and I had to play against her again. I played nearly ten games in a day. It was very exhausting. But I think I was well prepared mentally and physically and I was very happy on winning that.

You have been competing at the National and International level at various categories, what are some of the major challenges you have been facing and how do you counter it?

Playing with senior players is not easy at both at the National and International levels, because they have a lot of experience comparatively. But I think its very important to not get scared when you’re playing against them and carrying the confidence and self-belief that I can win over them is very important. And it’s the ball that you’re playing against the ball and not the player. What are the other things that interest you besides Table Tennis?

Not so much. I actually don’t find much time. But recently I have found interest in sketching and when I’m free I have been sketching a bit.

How would you describe your playing style and game?

What are your plans for your immediate future and your long term goals?

My long-term goal is to win a medal at the Olympics for India and my immediate goal is to increase my ranking at the Senior level at both the National and International level. What would you consider your best performance till date and why?

I was World Ranked 4 in U-15 and last year I won National Championship at both the U-18 and the U-21 Category. Those are the best moments in my career thus far.

The whole year was filled with ups and downs and I had to play from the qualification round in both the categories as I was not ranked in the top 8 which made the win extremely special.

Not really. On table no one is my friend, but I play against everyone the same way.

What are the aspects you feel you want to improve yourself on?

I want to work on everything as a whole. I would like to work more on my mental aspect of my game in particular. How do you consider Table Tennis scenario in India?

Now is the Golden age of TT in India. After the Asian Games and the 2018 CWG TT has been on a high in India , especially after the Indian men and women team won Gold and Manika Batra won Gold at the Individual category. I think they are becoming more and popular in India now. UTT is a wonderful platform. Players from here are getting more opportunities to play with foreign players. More chances have been given to Junior and Youth players. Playing with and against foreign players will help improve the performance of the Indian players.

Backhand, forehand, serve, volley – which one is your favorite?