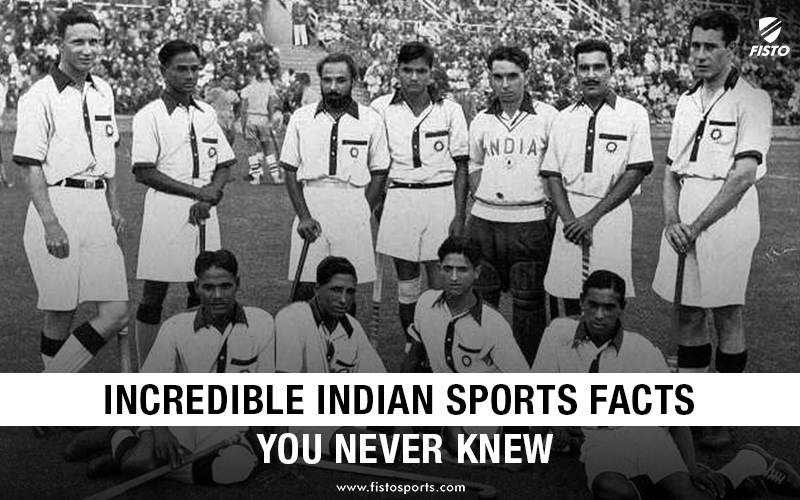 With the slowest week of sports upon us and no professional games being played, it’s been an agonizing few months.

No Football, no Cricket, no Olympics, no sports … is this real life?

Besides stay-at-home and Netflix, the only thing that has keep us sane is looking into unusual sports facts, so Fisto Sports combed through our extensive archives and scoured the Internet to come up with as many as incredible  sports facts that even die-hards fans probably did’t know, such as how the Hockey legend Dhyan Chand got the famous second name to Milkha Singh’s ‘Flying Sikh’ to Norman Pritchard, who was the first athlete to represent India in Olympics, 1900 in Paris and many more.

Here are the eye-opening and unknown Indian sports facts that you have yet to discover.

1. Shooting is now a route to success for India

Shooting has been an Olympic sport since the first Olympic Games in 1896. It is the only sport to feature in both winter and summer Olympics, in the Biathlon, Shooting and Modern Pentathlon programs.

Norman Pritchard was the first athlete to represent India in Olympics, 1900 in Paris. He won two silver medals in 200 metres and 200 metres hurdles.

Phadeppa Dareppa Chaugule is the first athlete from India to participate in a marathon at 1920 Olympics. Pavanjaya gave his all on the track to finish 19th in 1920 Olympics with a time of 2 hours 50 minutes 45.2 seconds. It was a great effort for him. Vasudevan Baskaran is the only Tamil Nadu player to lead Indian team to Olympic Gold (Hockey, 1980). He was also the first from Tamil Nadu and the last man to lead India to an Olympic gold (1980).

Combining roller skating, basketball, handball and throwball – you get  Roll Ball – invented by Pune’s Raju Babhade in 2003 and now the game being played in 60-plus countries.

Jankidas Mehra was a man of many firsts and talents. He was not only prolific actor, director, writer but also first Indian Olympic Cyclist, and was the only Indian to have broken the world record in cycling between 1934 and 1942.

Also Read: 30 interesting facts about India at the Olympics

As ridiculous as it may seem, Indian Hockey goalkeeper Richard Allen has the yet-broken record of conceding just two goals in Three Olympic Games.  One goal was conceded while Richard was busy signing autographs; in which India men’s team won 24-1 and another was a rebounded effort in the finals of 1936, India won 8-1.

In the tip of the sword in fencing is the second fastest moving object in Olympic sports. The marksmen bullet is the first.

Sachin Tendulkar and Yuvraj Singh are the only two Indians to win the man of the tournament award in the ICC Cricket World Cup.

The sport Kabaddi was named after Tamil term ‘Kai-pidi’ which means holding hands.

In 1926, India Hockey team toured New Zealand and played 21 matches of which India scored 192 goals and conceded only 25.

India’s Balbir Singh holds a record of maximum goals in an Olympic final when he scored 5 goals in India’s 6-1 win against the Netherlands. The record is still unbeaten.

Nikki Pradhan is the first woman hockey player from Jharkhand to represent India at the Olympics. Durand Cup is the third oldest football competition in the world. The prestigious Indian football tournament was first held in 1888, is the oldest in Asia.

Mary Kom is the only woman to become world amateur boxing champion for a record six times. And the only woman boxer to have won a medal in each of the seven world championships.

Atanu Bhattacharya is the only Indian to win a place in the Asian All Stars XI. He was part of the Asian All-Stars in 1984. Interestingly, he played for our Indian team and then got a call for the Bengal team that later Won the Santhosh Trophy.

Golfer Vani Kapoor was the first Indian to earn a card for the Australian LPGA Tour.

Salien Manna was the only Asian to ever make it to the list of the world’s 10 best captains in the English celebrated football yearbook. He was part of the Indian football team for the London Olympics 1948. He was awarded the Padma shri by the Government of India, named Footballer of the Millennium by AIFF and the Club conferred him 'Mohan Bagan Ratna. India is the only country which has qualified for Hockey World Cup 14 times (most by any country), but has won only once in 1975.

Hockey hockey stick and ball legend Dhyan Chand got the famous second name because he would practise hockey alone in the moonlight, his friends and colleagues started calling him, 'Chand' (Moon), hence the name transformation from his original name, Dhyan Singh.

Sandeep Singh is probably one of the greatest drag flicker to ever grace the game- thus earning him the nickname ‘Flicker Singh’ — with a world record for the fastest drag flick in history (145 km per hr).

25. The story of sacrifices

Tababi Devi, who was the first Judoka to win a medal for India at the Olympics (junior or senior) needed to train secretly since her parents were afraid of the intensity of sport that she may get hurt. But Devi always liked fighting spirit.

Prakash Padukone purposely conceded a point against his idol Rudy Hartono out of respect at the 1980 Swedish Open. And after the match, he said: "I could have beaten him 15-0 in that last game but I couldn't do that to my idol, I conceded a point and finished the game." How Legendary Milkha Singh got his nick name "The Flying Sikh" is some feat.

In 1960, Milkha Singh refused to participate in a race at Pakistan. But eventually he did participate & also won. After the race, Pakistan President said to him: "Milkha, you did not run. You flew.

India hosted the first Asian Games at 1951 and bagged 15 gold medals, most by India at Asian Games.

Neeraj Chopra is the only and lone Indian to win a gold medal at the IAFF World U-20 Championship. Indian football legend IM Vijayan scored a goal in 11-seconds against Bhutan in the 1999 SAFF Games which is one of the fastest goals in international football history.

Singh is the most common surname among Indian Hockey Players. Once during a match, a foreign journalist in his dispatch wrote, “Singh initiated the move. After dodging past a defender, Singh passed the ball to Singh, who centered it to Singh and Singh scored the goal with a reverse flick”.

Every winter, a village in Punjab hosts India’s one-of-its kind Rural Olympics. An ­extravaganza of archaic trials of strength, traditional culture, martial arts and animal show to give an opportunity to the farmers to test their stamina and strength.