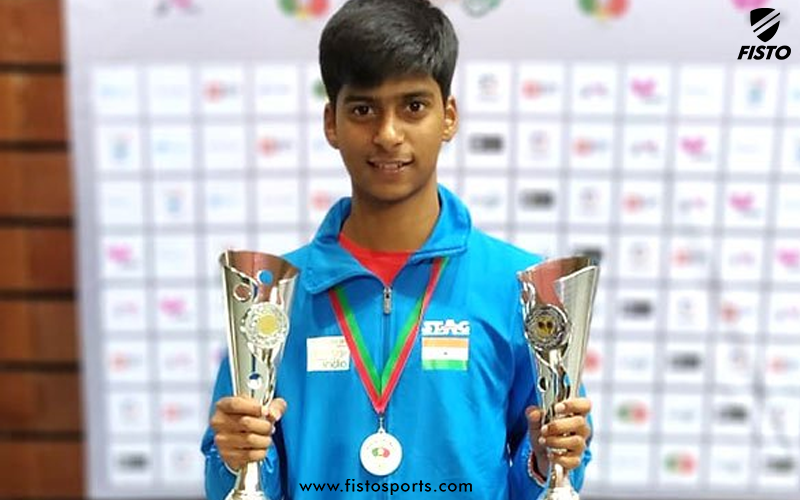 Nineteen-year-old paddler Fidel R Snehit has already begun to establish himself as one of the hottest prospects in Indian Table Tennis circuits.

There are plenty of young paddlers who have impressed the masses over the years, with Manush Shah, Manav Thakkar, Payas Jain and Mudit Dani to name a few. All of those players have all had a decent impact over the years. Fidel R Snehit is the latest player to force the national TT circuit to stand up and take notice.

Snehit is a very direct player who uses pace, power and strength in an almost brutish way to force his way through opponents.

Wait gets longer for foreign training:

After a successful 2019 and 2020, the Hyderbad paddler Fidel R Snehit, in order to break into senior Indian team, was planning to train in the Germany or Portugal alongside world’s top players and the coaches. However, the COVID-19 dismantled all the planning of the 19-year-old, who is now eagerly waiting for table tennis action to begin.

Snehit, who was 337th in the U-21 world ranking at the start of 2019, took a huge leap and claimed 40th position within just span of 16 months riding on some outstanding performances including a semi-final finish at Oman Open, U-21 singles gold at Khelo India and National youth boys’ singles crown.

Reading books to keep himself motivated during lockdown:

Being a journalism student, Snehit always wanted to read more books but due to busy schedule he never got chance to go beyond 4-5 pages of any book. Snehit, who became the first player since 1960 to win national title for the state, has been spending time reading motivational books and autobiographies including one of his favourite sportsperson tennis star Rafael Nadal and says reading their journey keeps him motivated during gloomy days of lockdown.

Learning tricks and techniques from videos of world and Olympic champion:

With the absence of action on the table due to government restrictions, Snehit has been learning new skills and techniques watching videos of his idol Ma Long-Olympic and world champion paddler from China. Snehit observes every move of the champion and sometimes make a note for future reference. He dreams of playing against his idol, whom he saw practicing live for the first-time during Qatar Open earlier this year.

With an ultimate goal of winning Olympic medal for the country, Snehit wants to break into senior national team. Aware about the healthy competition for the spot in Team India, Snehit is aiming to play more and more international tournaments and doing well there to strengthen his chances.