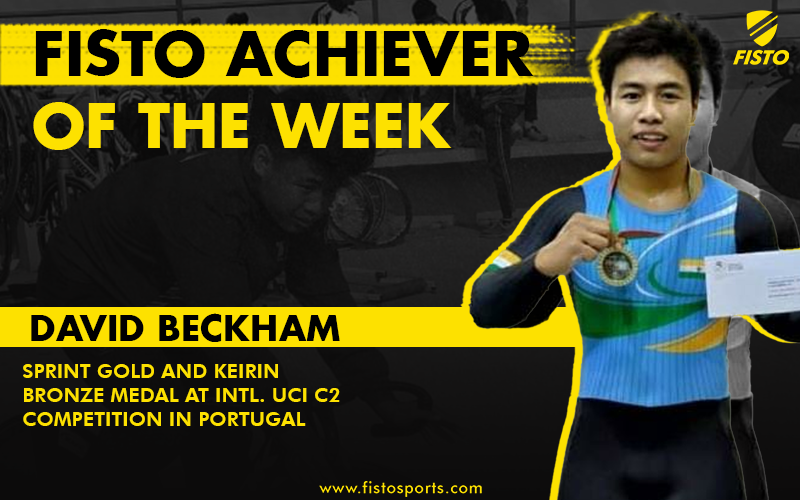 Every week, deserving young Indian athletes will be recognized for displaying well-rounded achievement.

A busy week with a lot of sports means a lot of joy for all us fanatics. The month of November straddled with many captivating tournaments in as many as sports which was a treat. That leaves the young players across the nation with plenty of opportunities to cement their year with reckoning performances, and indeed, stake their claim to a spot in the Fisto Sports Achiever Of The Week, making a comeback after a long hiatus.

There are good and bad things that come with having the same name as someone else. For national record-holder cyclist David Beckham, many have wondered if he is related to Football superstar David Beckham.

The answer is NO!

David Beckham is the archetypal modern cyclist who is steadily reaching new heights in the realms of the unsung sport. The Andaman and Nicobar native recently won two medals including a gold and a silver medal in the sprint and keirin respectively in the international UC1 C2 competition representing India in Portugal.

Earlier this year, Beckham created new national record with a timing of 1.07.300 seconds en route to his gold medal finish in the 1km time trial event at the national track cycling championships.

The pathway to professional cycling is not one taken for granted in many of the developing countries when it comes to sports other than cricket and football. In fact the path is so not well worn with degree of competition rather sees the opposite problem; potential cyclists may be a dime a dozen but the proportion of these young hopefuls that do make it to the professional grade is nothing to write home about.

Thus, for the young talents who do get an opportunity, it is one that has to be earned and made the most of. Beckham's progress will be keenly observed over the coming years but, given Indian cyclists brilliant performances in recent years, he is in perfect place to gain experience and flourish. Beckham certainly continue to assert himself deep into the sport.

About ACHIEVER OF THE WEEK

The week’s outstanding individual and team accomplishments are recognized and celebrated through Fisto’s ‘Achiever Of The Week’.

Under our Achiever Of The Week banner, we have constantly strived to document and highlight the progress of the younger stars of Indian sports, before they progress into household names.

Fisto Sports has been proactive and has been covering young prospects extensively who can go on to become superlative athletes in the future, serving as a quintessential motivation for the budding talents.

Everyone talks about ‘catching them young’, but once they’ve been selected, there is no mention about them until they achieve something at the national or international level.

With an aim of covering athletes who are performing well in schools and colleges and national and International stage, every Indian Sports fan has to be informed and updated about upcoming prodigies who can create a massive impact in the future.