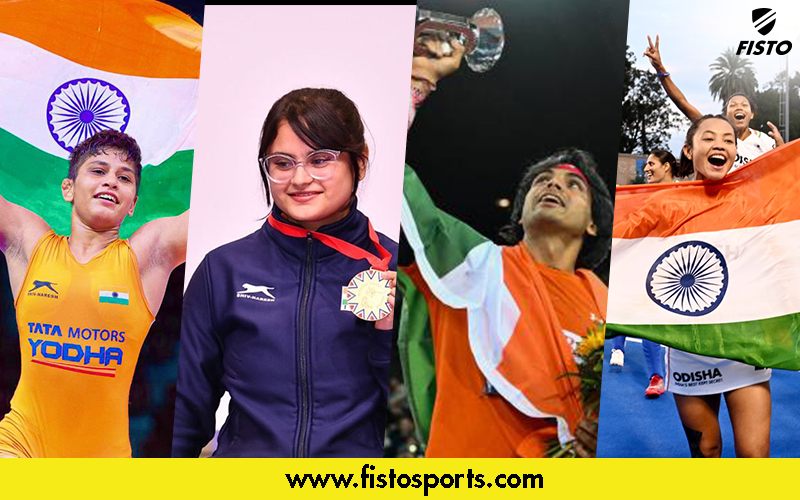 With the calendar turning to 2023, Fisto Sports is looking back at the most iconic sports moments of the past 12 months. Here, in no particular order, are the 15 that stood out most:

With accolades in abundance and stats in stratosphere, Avani Lekhara stays shining on the international stage. The ace shooter smashed her own World Record – 250.6 to win gold medal in 10m air rifle standing SH1 at the World Shooting Para Sport World Cup. In the process, she secured India’s first quota for the 2024 Paris Paralympic Games.

A victory like none other! One that many consider equivalent to the Cricket World Cup triumphs. The Indian men's badminton team made history in May when they stunned 14-time Champions Indonesia to win the Thomas Cup. It was India's first finals appearance in the tournament's 73-year history, only the 13th time they had qualified in 32 editions and the men made sure India became only the 6th country after China, Malaysia, Indonesia, Japan, and Denmark to lift the coveted crown.

How can Neeraj Chopra not be on this list? After all, he had another unbelievable year, collecting new records on the global stage. While he couldn't defend his Commonwealth Games crown due to injury, the Olympic Champion became only the second Indian and the first Indian male to win a medal at the World Athletics Championships. To add to his silver in Oregon, Neeraj also became the first Indian to win the Diamond League title in September, capping off another year where India's golden man with the golden arm shone through.

The Historic Firsts at CWG

Indian athletes kept aside the disappointment of shooting not being part of the games by winning 61 medals at the quadrilateral event. While the boxers, wrestlers and table tennis players lived up to their top billing, there were some surprises too. In Triple jump India won two medals and in Lawn Bowling four hitherto unknown ladies made the country fall in love with the sport. The women's cricket team too won the silver in the very first full-fledged edition of the sport at the Commonwealth Games.

The Indian women’s hockey team won the inaugural Nations Cup and ensured a place in the FIH Pro League event. During the course of the tournament, they won all their matches including over stronger opponents like Ireland and Spain.

In October, 18-year-old Rudrankksh Patil won gold in men’s10m air rifle event at the ISSF World Championship becoming only the second Indian since Abhinav Bindra in 2006 to achieve the feat. Patil also secured a 2024 Paris Olympics quota for the country in the process.

The Indian mixed 4×400 relay team clinched a silver medal by bettering its own Asian record time in the final of the World U-20 Athletics Championship. The Indian quartet of Barath Sridhar, Priya Mohan, Kapil and Rupal Chaudhary clocked 3 minutes and 17.67 seconds to finish behind USA (3:17.69). The new timing of 3:17.67 is the second best (in juniors) in the all time list in the event, behind USA's.

India qualify for U19 and U20 Volleyball World Cups

A perfect blend of talented volleyball players from the country made us believe that Indian Volleyball’s Got Talent. The Indian under-18 and under-20 volleyball team qualified for the World Cup after clinching bronze medals at the Asian Volleyball Championships. While this is only culmination of something special, the reality is this is only the beginning of some of the most talented young players in the game.

Linthoi Chanambam may not be a household figure in India yet but the 16-year-old Manipuri from the outskirts of Imphal etched her name in the history books. She became the first Indian to win the gold medal at the World Cadet Judo Championship in Sarajevo, Bosnia in late August.

Aman Sehrawat scripts history and how! He became the first Indian wrestler to win a Gold medal at U23 World Wrestling Championships. He beat Turkey’s Ahmed Duman 12-4 in the final to claim the gold, making this India’s best showing at the U23 Worlds since the tournament started in 2017.

The Indian men's U17 3x3 basketball team created history last Sunday when they qualified for the upcoming 2023 FIBA U18 3x3 World Cup. The hoopsters achieved this feat with a second-place finish 3x3 Asia Cup.

This will only be India's second appearance in a global basketball tournament after having made their debut in the inaugural U18 3x3 World Cup back in 2011.

The Tokyo Olympic silver medallist, competing in the 49kg category, managed to lift 87kg in snatch and in 113kg in 'clean and jerk' for an overall effort of 200kg.

It is Manipuri lifter's second medal at the World Championships, having won a gold in 2017.

Gifted with fearless spirit and technical mastery, Antim Panghal inked her name in the Indian sporting history by winning India’s first-ever gold medal at the World U20 Wrestling Championships 2022 in August. The 18-year-old freestyle wrestler from Haryana is also the reigning Asian champion in the same age category.

India vs Pakistan at the mighty MCG, it doesn't get bigger than that. Chasing 160 for victory in their opening T20 World Cup encounter, the Men in Blue were down and out at 31/4. But cometh the hour, cometh the man. When all hope was lost, India's King Kohli once again single-handedly lifted 1.2 billion Indians out of despair with a stunning 82*. His knock, the best of his star-studded career, saw his side win on the final ball with 90,000 at the 'G' witnessing a true spectacle.