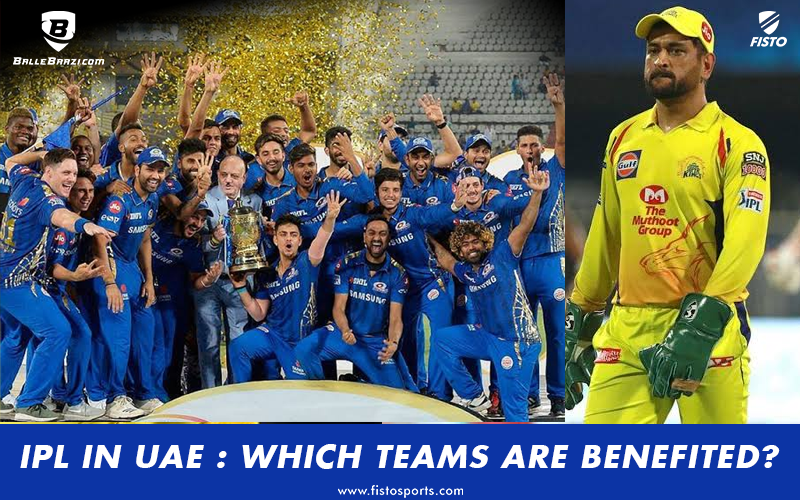 Expectedly, this change in venus from India to the UAE could play to the advantage of some teams left in the hat. On that note, we take a rundown of four teams who stand to benefit from this change in the second phase of IPL in UAE.

BCCI has announced that IPL will take place in UAE due to the deadly pandemic that is picking our country apart. IPL 2021 saw massive changes in fortune for CSK and RCB as they sit comfortably in the top half of the table.

Pitches in UAE offer different challenges and would bring sweet memories to teams that struggled in India. With key players backing out due to international duties franchises must revamp their game plans to be successful. Teams like SRH and KKR would be welcoming the move after their disastrous outing in India.

On that note, we take a rundown into the teams that would be benefitted from the fresh start in UAE.

Mumbai is currently sitting 4th having won 4 and lost 3 in the process. Their struggle can be owed to the fact that they played most of the games in a slow and sluggish Chennai pitch. They struggled to up the ante at crucial times and lost close games.

Mumbai Indians had a maverick IPL last year winning 9 out of 14 games and winning the final with ease. UAE’s bouncy tracks with a hint of movement suited the MI bowlers. Ishan Kishan, Suryakumar Yadav, Quinton de Kock were among the top 10 run-scorers in the tournament striking at an average of 142 among them.

MI’s strength over the years has been their talent scouting and nurturing young Indian players. The five-time winners would be morally astute after a thrilling win again against their arch-rivals CSK. A lot of other franchises depleted by the absence of star players, MI remains strong on course for another title.

SRH remains stranded at the bottom of the table with a mediocre batting display and sacking the best SRH batsmen Warner from captaincy hasn’t helped their cause either.

Kane Williamson committed towards national duty, this is certainly a harder time for SRH fans. The Orange Army Eagles had a season to remember last year with Warner bringing down attacks and their newly found poster boys Natarajan yorking batsmen regularly.

The Salem native has his name in the top-10 of most dot balls bowled and most wickets taken. They progressed to the semifinals where they lost out to Delhi. They are also one of the few sides with the best death bowling economy. The shift to UAE would give them a cushion as well bottle of problems, if they could get Rashid and Bairstow playing then it would hugely boost their chances. They need to win all their games to confirm their chances in the playoff which seems rather bleak at this point.

PBKS had a roller-coaster ride in UAE with losing 5 games to winning 4 games in a row. They changed their name to Punjab kings this season, but their fortune remains the same as they find themselves in the same spot.

They are very unpredictable with playing tremendously in a game to ooze off in another, opening pair has ben their advantage and to win games they need the pair to fire consistently. The big Jamaican Chris Gayle will be available which is a great positive.

KL Rahul topped the charts for leading run-scorer and his form will be crucial. They will be without their pace battery (Riley Meredith and Jhye Richardson), and the onus will be on Shami and Harshadeep to perform. If they could find ways to restrict runs in the death overs, they are truly in contention for the play-offs.

KKR has one of the most valuable and versatile squads In all the departments but is struggling to find the right balance in the middle order to sail them through the middle overs.

They had a decent IPL last year with Eoin Morgan and Shubman Gill shouldering the batting unit, the mystery spinner Varun Chakravarthy enjoying a good season with the ball. KKR has the captaincy dilemma to solve after England and Wales Cricket Board (ECB) announced England players won’t be playing this year’s rest of IPL in UAE.

KKR’s onus depends on the Indian stalwarts like Shubman Gill and Shivam Mavi to perform consistently. If the Kolkata side could stop losing a lot of wickets at the top, they are serious contenders for the play-offs.

With very humid and heat conditions, UAE challenges players physically and mentally. Teams that start with a  win would have the momentum to move forward in the tournament. CSK RCB and DC sitting comfortably would need to win 3 out of 7 to cement their play-off spots.