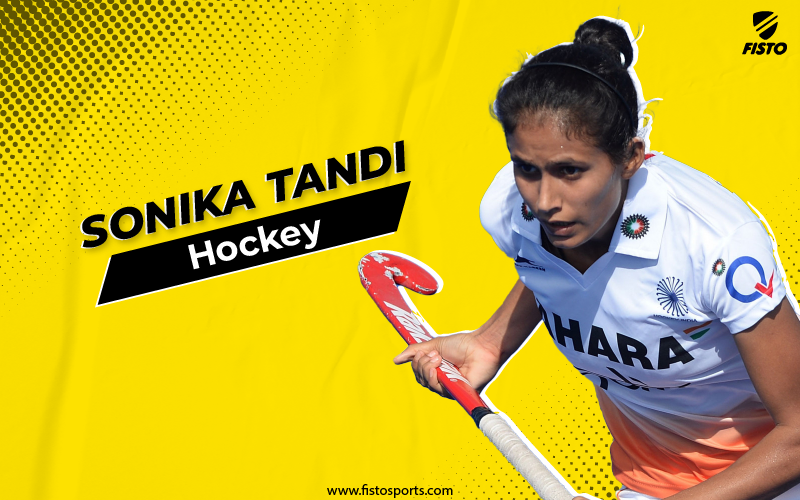 From the Denmark of India, Sonika Tandi was a dreamer that kept achieving her dreams. The 25-year-old has been the shining light for the Indian women's hockey team and she is among the first names on the team sheet, featuring in India's FIH Women's Hockey Pro League 2021/22 matches, in which she has already scored one goal in five games.

Operating at the base of midfield, the 25-year-old has played brilliantly across the season and has proved her worth in midfield behind a prolific Indian attack. She  has showcased an exceptional passing range and skill and will be able to dictate play easily from midfield if she is given the time and space to do so. Her movements  also are very fast and useful to get past players and break up defences, and now faces a very promising career ahead of her.

Sonika's link with hockey started over 15 years ago, in 2008. She started the sport to keep her mind right and to have something to focus on. Sonika also went on to recall how she began developing an interest in the sport when she was just 9 years old.

A visit from a veteran hockey Coach at her school in Hisar, Haryana, sparked a desire in young Sonika to pursue the sport.

"It was the first time I had seen someone wearing the Indian tracksuit. I wanted to wear the same and represent my country on the biggest platforms."

Sonika's Coach advised her to work hard to fulfil her dreams. From then on, she became focused and started training rigorously every day. Her father, who was a volleyball player, gave her full support to pursue the sport. Her mother, too, shunned down the neighbours who questioned them for pushing their young daughter towards sports.

"I was quite a naughty kid. My parents thought the sports will bring discipline into me, so they never refused to let me go for training," Sonika said.

Sonika is the type of player who makes you believe, and there is real conviction in her words.

Sonika was selected at the Senior Women's National Camp in 2016 and made her Senior debut at Hawke's Bay Cup in New Zealand. She was also part of the Indian Women's Senior Team that won the Gold medal at the Women's Asia Cup in 2017.

In 2020, after the New Zealand Tour in January, Sonika decided to take a break from the sport and the National camp, during the Covid-19 lockdown, to spend time with her family.

"I wanted to be with my family amid the lockdown. I was finding it hard to focus on the sport. I am thankful to my parents, my teammates and the Hockey India coaching staff, who all really supported me at that time," she said.

"Everyone stayed in touch with me and kept motivating me to bounce back. It really helped me out a lot," Sonika said.

In 2021, Sonika decided to make a return to hockey with the Senior Nationals. "The Senior Nationals gave me a platform to showcase my talent once again, and gave me a chance to bounce back. I feel grateful that I am back on the field again. I am thankful to everyone who stuck by me during that time."

In 2022, Sonika was selected again for the India Senior Women's Hockey Team, and represented the country in the FIH Women's Hockey Pro League 2021/22 matches, in which she has already scored one goal in five games.

Sonika has been in this game long enough to know how important being fully focused on hockey is and the dedication needed to reach the required standard to perform on the highest level.

Now, with the FIH Women's Hockey World Cup 2022 on the horizon, Sonika is hopeful that India Women's Hockey Team will be able to attain a podium finish this year. "We have been working really hard and we are in the camp for almost a year. We want to have a podium finish as it will be the ultimate reward to all of our hard work. 'I am naturally quite positive, and there are still plenty of years left for me."

Like many in life, hockey have helped to guide us and mould us, well almost. It is a sport that quickly becomes addictive and brings out the best in whoever participates while providing a sense of belonging, guidance, and purpose.

The Haryana native grows in excitement as the conversation continues, as she maps out her future both immediate and long-term. As of right now, however, Sonika is fully focused on giving herself to the country as many memorable matches as possible.