India with the number of medals it holds in Olympics, Commonwealth Games or any other sport barring cricket is most often referred to as a country that is below the bar when it comes to sports. Sport stars in India gain the accolades only after reaching great heights and many of them remain unrecognized.

The Government of India on understanding the significance of Sports has set up a ministry to develop the sporting culture. The Ministry of Youth affairs and Sports, Government of India confers awards to honor outstanding achievements by sportspersons in the field of sports every year. Donning the National Sports Day every year, the President of India gives away the awards at the National Sports awards at the Rashtrapathi Bhavan. Take a look at some of the awards as gifted by the Sports Ministry of India.

READ: Still just a teenager, Rishita Jain powerlifting her way up and expectations 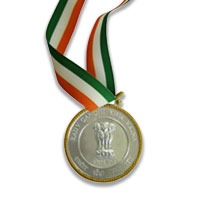 Instituted in 1991, the award is the highest ranked National sports award given by the Ministry of Youth Affairs and Sports in recognition of the spectacular and the most outstanding performances in the field of Sports for over a period of four years at the International level. The Rajiv Gandhi Khel Ratna award as the name denotes is the award given out in memory of the Late Prime Minister Rajiv Gandhi. It holds the highest rank amidst all the other Indian National Sports award. Until 2004, a cash prize of 5 Lakhs INR was given to the awardees and since 2005, the prize was increased to 7.5 Lakhs INR along with a medal and citation. Vishwanathan Anandh was the first recipient of the award in 1992 and Pankaj Advani is the only Indian to have received the award for two different sports, Billiards and Snooker. The award symbolizing Arjuna, the famous Archer from Mahabarata, is awarded in recognition of sportspersons who have exhibited consistent and outstanding performances for a period of four years at the International level. The award conferred by the Ministry of Youth Affairs and Sports is ranked the second highest. The award instituted in 1961, is one of the oldest awards given away by the Government. A Bronze statue of Arjuna along with a cash prize of 5 Lakhs INR and a certificate are bestowed upon the winners. Later over the years the terms for the award were revised and were given to sportspersons who displayed a character of leadership, sportsmanship and a sense of discipline in addition. The inaugural edition of the award saw six Indians receiving the honor. The award alike the Arjuna Award has it’s name inherited from the character  Drona , the much sought after warfare teacher from  Mahabharata. The award initiated in 1985, in accordance to its name is awarded to honor the achievements of coaches who have done an Outstanding and meritorious work on a consistent basis to enable sportspersons to excel in International events over a period  of four years. There are two awards dedicated for lifetime contribution in producing outstanding sportspersons for a period of over 20 years. The winners are awarded with a bronze statue of Dronacharya and certificate and a cash awards Prize of 5 Lakhs INR. The award is not usually awarded to not more than five coaches annually.   A total number of 105 awards has been  conferred thus far. Balachandra Bhaskar Bhagwat,  Om Prakash Bhardwaj, O.M. Nambiar were the first to receive the honor.

ALSO READ: One leap at a time: How Sreeshankar Murali is raising the bar on the long jump Dhyan Chand award also referred to as the Dhyan Chand award for lifetime Achievement in Sports and Games, is an award conferred for lifetime achievement in Sports and Games. The award is named after Dhyan Chand, the legendary hockey player who scored over thousand International goals and was also a soldier in the Indian army. Commenced in 2002, the award is granted to glorify coaches based on their contribution to sports during their sporting career and after their retirement. The done are gifted with a statuette of Dhyan Chand, a certificate and a cash Prize of 5 Lakhs INR. The award is usually granted to 3 individuals every year.  A total number of 51 individuals have been  awarded with the Dhyan Chand awards. The honor and the respect it ingests is unmatched and it is looked upon as a connotation of pride rather than for the monetary benefits. Padma awards are the civilian awards granted by the Government of India. The award is conferred in three categories with Padma Vibhushan  being the second highest civilian award after Bharat Ratna for exceptional and distinguished service, Padma Bhushan ranked the third highest for distinguished service of high order  and Padma Shri the fourth for distinguished service in any field. These awards are granted to honor excellence in various fields such as art, social work, literature, Civil service etc. Since it’s institution in 1954, 200 Padma shri awards, 30 Padma Bhushan and 3 Padma Vibhushan  adding on to a total of 233 Padma awards have  been given out to Sportspersons. Sachin Tendulkar and Vishwanathan Anand have three Padma awards to their name. Bharat Ratna also referred as the “Jewel Of India” is the highest civilian award given by the Government of India.  It is given to recognize individuals who have done Exceptional Service to the country in various fields such as Science arts, Literature and the terms were later expanded to any field of human endeavor The award was initiated in 1954 and the first of the awardees to receive the honor were Sarvapalli Radhakrishnan, Sir C.V. Raman and Chakravarti Rajagopalachari. The award was later revised in 1996 and a provision to grant it posthumously was granted. Sachin Tendulkar is the first and the only sportsperson to have received the honor. He is also the youngest to have received the honor.