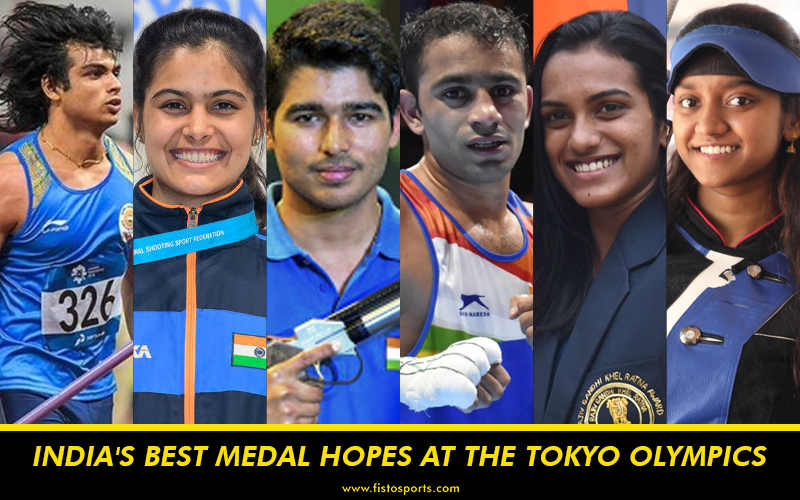 Here’s a look at 11 Indian athletes leading the charge for the top medals at this summer's Olympics.

With the clock ticking down to the Tokyo Games, Indian athletes are putting the final touches to their Olympic preparations.

India has quietly assembled an Olympics team that is now predicted to deliver its best Olympic medal tally since 2012.

While there is certain to be chaos away from the events, it shouldn’t overshadow the promising performances Indian athletes are expected to deliver.

Global data giant Gracenote Sports in April announced India should win eight medals in shooting, four in boxing, three in wrestling and one each in archery and weightlifting in the Quadrennial event, 17 medals total in what would be one of our best ever returns.

But who are the members of Team India who are likely to star in their respective disciplines and attempt to lead their country to that mark?

The Olympic medal is often seen as the final piece of the jigsaw for many athletes, and that is certainly the case for Bajrang Punia.

He was unlucky to miss out on qualification during the last edition of the Olympics in Rio. But in the last four years, the world No.1 grappler has become one of the frontrunners to win an Olympic medal for the country in Tokyo.

The 27-year-old is the complete modern-day wrestler. One of Punia’s main assets that sets him apart from the rest is that he oozes composure when he is on the mat.

Despite overcoming many adversities, Vinesh Phogat never fails to dazzle both domestically and internationally as she continues to stack her claim to an Olympics medal since 2018 by winning golds in the Asian Games and Commonwealth Games.

She concluded the 2020 competition season with a gold at the Rome Ranking Series. A tough fight will come from Japan's Mayu Mukaida, who has pinned the Haryana wrestler in three of their previous meetings.  And Tokyo presents another opportunity to claim not only a medal but also her attempts to create a wrestling legacy of her own.

Arguably the biggest star in Indian badminton, PV Sindhu would be determined to do better than the Rio Games where she had finished runners-up, ending with a silver.

The 2016 Rio Olympics silver medallist will be eyeing gold in Tokyo. The fact that Spaniard Carolina Marin, who beat her to the gold in 2016, is out due to an injury, makes Sindhu a contender. She won the World Championships in August 2019.

Though 2021 didn't start off too well for her, the recent Swiss Open and the All England Badminton Championships were good. She has been working on improving her performance with South Korean coach Park Tae Sang. The 26-year-old will be hoping to bring her A-game to the table and stands a positive shot at winning a second Olympic medal, if not a gold, for sure.

Six-time World Champion, MC Mary Kom is India’s finest female boxer ever. She doesn’t cease to work hard and improve her form. She is one of the most experienced boxers in the Indian contingent. Mary Kom is also the only female Indian Boxer who has won an Olympic medal.

Having unable to qualify for the Rio 2016 Games, the 38-year-old is keen to take the top honour in her second Olympics appearance.

After the astonishing achievements of Karnam Malleswari, Mirabai Chanu is the new woman in town and is ready to take the Olympics by storm for India in weightlifting.

Former world champion Chanu smashed the clean and jerk record in April this year by lifting 119 kg in her final attempt and created a new record at the Asian Weightlifting Championship in Tashkent.

Chanu will hope to make her impact on the Games in the most dramatic way possible and she is confident of bagging a gold at Tokyo and is ready to set a new world record.

Already seen as one of the country’s most exciting boxers, Amit Panghal has a habit of rising to the big occasion and he will need to be in the form of his life in Tokyo to claim a medal.

The diminutive boxer from Haryana has built himself a CV with lofty achievements. Panghal won an Asiad gold in 2018 by beating the 2016 Olympic champion, a Commonwealth Games silver in the same year, and became the first Indian male boxer to win a silver in the World Championships in 2019.

His achievements propelled him to the world No. 1 rank in the 52 kg category. His silver-winning run in the 2021 Asian Boxing Championship in May will give him the steam and confidence to take on the big guns in Tokyo.

Where else could we start, really?

At just 19 years old, Saurabh Chaudhary is handling his Olympic debut with poise and maturity far beyond his years.

Saurabh is one of India’s top hopes for a medal, especially given his performance in Croatia. The pistol shooter partnered with Manu Bhaker to bag a silver in the mixed team event in his last event. The duo has won multiple ISSF World Cup gold medals since 2019.

The Meerut-born shooter has qualified for the World Cup final every time in the last couple of years. The shooting world will have a close eye on the young talent, as will his competition and few would bet against him creating history in Japan this summer.

As she moves through the junior ranks, Manu Bhaker looks every bit like India’s next great hope in shooting.

It was only in 2017 that Manu Bhaker first tasted success at the international level by winning the Asian Junior Championships that year, and she hasn’t looked back since.

At the 2018 Youth Olympics Games in Buenos Aires, she became the first Indian shooter to win a gold medal. She extended her sharpshooting into 2019 as well, as she went on to win as many as five ISSF World Cup gold medals and a further two more yellow metals at the Asian Shooting Championships. 2019 was also the year when the 10m air pistol shooter booked an Olympic quota in the shooting World Cup held in Munich.

The 19-year-old has also sounded confident about performing well in the 25m air pistol event at the 2020 Olympics, offering India a further shot at glory.

The Golden Era for Indian shooting seems to have a never-ending pipeline of young talent. Women’s 10m air rifle world No.1 shooter Elavenil Valarivan is arguable the top medal prospect.

The 21-year-old has won gold in the World Cup Final in China and the World Cup in Brazil in 2019 and continues to reign the 10m Air Rifle event and she’s expected to make history once again.

The high-profile archer is heading to her third Olympic Games in Tokyo. The World No.1 is desperately chasing her first Olympic medal.

Deepika dominates her division domestically and on the world stage. But that hegemony has not quite transferred to the Olympic Games, where she has suffered heartbreak rather than any sort of happiness. But with World No 1 status back in her hands, Tokyo represents another great opportunity.

She recently secured a hat-trick of gold medals in the Archery World Cup Stage 3 in Paris, thus winning her 13th triple gold and has become the 11th archer in the history of the Archery World Cup to claim such a feat. Jharkhand Chief Minister Hemant Soren awarded Deepika a cash award of Rs. 50 Lakh for her excellent performance in Paris. She exudes confidence and with her recent performances, it won’t be a surprise if Deepika returns home with an Olympic gold.

The star Javelin thrower will lead India’s push for India's first ever medal in Athletics. Chopra’s form in the recent years has seen him join discussions surrounding the best on the planet.

The 23-year-old has the potential to break the drought of Indian athlete failing to win medals on the track and field.

Chopra made history in 2018 with gold medals in both the Asian Games and the Commonwealth Games - the first by an Indian in javelin throw in both competitions. Chopra is in hot form and recently broke his own national record in the discipline, and will be looking to carry on in similar vein when he goes to Tokyo.

Indian men’s hockey team is ranked fourth in the world and has showed enough from recent series to prove it is the real deal. After a disappointing 2016 campaign where they failed to go beyond the quarterfinals, the men in blues are India’s best hopes for a medal in a men’s team event.

Despite winning record eight gold, the team is often under more pressure because they’re aiming to break the four-decade-long medal drought, as their last one was in the 1980 Moscow edition.

The team’s strength is their defence, and they also have six experienced players who have handled big-match pressures in the past. The team has been performing well this year, with successful tours to Europe and South America. Recently, in an Argentina tour, they scored 12 goals in four practice matches and five in two FIH Pro League games against the Olympic champions.

The team has been through many lows in the Olympics and also underperformed at the 2016 Rio de Janeiro and the 2012 London editions. The team has 10 debutantes, some of who haven’t experienced the pressure of such high-octane international matches.