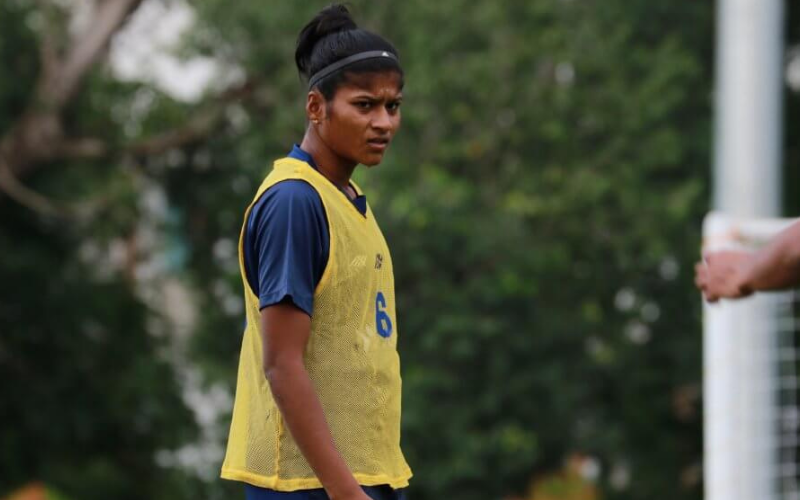 Football is a sport that is made beautiful, especially when a team bonds together to be greater than the sum of its parts. One key aspect of such endeavours is communication -- something that Blue Tigresses midfielder Indumathi Kathiresan lays a lot of stress on.

“It’s all about communicating on the field to fill in the missing areas, when you’re playing in the midfield,” Indumathi said to www.the-aiff.com “People mistake it to be pointing out the mistakes of others. But it’s not about that. If I don’t do it, they may not know what they’ve done wrong, and vice versa.”

“When they (my teammates) look into my eyes on the pitch, they should know that even if they make an error, I’ll give my life to come and help them; and when I look into their eyes, I too want to see the same. That’s what playing for the country is all about. That’s what football is all about,” she exclaimed.

While the 27-year-old midfield general stresses the importance of communicating with your teammates, it was not too long back that she herself found communication one of the hardest parts of football.

The daughter of daily wage workers from Cuddalore, Tamil Nadu, Indumathi Kathiresan completed her education in government schools with the help of scholarships, balancing both studies and sports. However, when she was called up to a month-long National Team trials camp, the young midfielder found that she could not properly communicate with any of her teammates.

“I had then got called up for a National Team trial among 50 girls. But I was the only one from Tamil Nadu. No other girl spoke Tamil, and I could not speak either Hindi or English, so I could not really communicate with anyone,” she recalled. “Not being able to speak to anyone around you for more than a month is really difficult.”“Sometimes I used to cry on the phone to my mother, and she would tell me to come back, but I knew I couldn’t do that. I didn’t understand much of what others said to me, I just smiled and nodded and kept going,” she said with a laugh.“I’ve had to change a lot. All the coaches told me that I need to be able to speak with others, because football is a sport where communication is essential. So I started to learn, and now I can manage,” she recalled.It is often said that difficult experiences breed tougher characters, and that’s exactly what the midfielder is, within the team. So much so, that she has made it her own effort to help others surpass such language barriers that she had earlier faced.“Now, when I see others coming into the team from Tamil Nadu, I try to help them in these matters. I don’t want them to face the same communication problems that I used to face,” Indumathi averred. “That’s how you move forward together.”

Now a Sub Inspector in Tamil Nadu Police, Indumathi would never have imagined that she would one day have gone on to play in a tournament of the stature of the AFC Women’s Asian Cup for the Blue Tigresses.

“Once I twisted a knee, and didn’t tell my parents about it. I informed them later when I went back to my village from Chennai, and instantly my mother asked me to stop playing. But I was as stubborn as they were. I threatened to run away from home if they made me stop playing football. I guess they now realise that my obsession with the game was good,” laughed Indumathi.

‘ASIAN CUP WILL BE A REAL FIGHT’
The AFC Asian Cup is just around the corner, and the Blue Tigresses have played a number of friendly matches in the UAE, Bahrain, Sweden and Brazil as part of their preparation for the continental extravaganza. The 27-year-old midfielder feels that the matches were of a very high quality, something that puts the team in good stead.“The friendly matches have helped a lot. All the matches were of a high quality. We played all of them thinking of the Asian Cup. The Brazil match was especially very tough. We tried so hard to manage that game, everyone gave their best,” she opined.Being the hosts, India are in Group A of the AFC Women’s Asian Cup, and have been drawn alongside IR Iran (January 20), Chinese Taipei (January 23), and China PR (January 26). Having played both Iran and Chinese Taipei in the last two years, Indumathi believes that every inch of the turf will have to be fought for against all the teams in Group A of the Asian Cup.“We have improved a lot, but they would also have come to fight in Asian Cup. I feel it will be a fight until the bitter end, but we are ready to give everything,” she said. “We will take it match by match.”