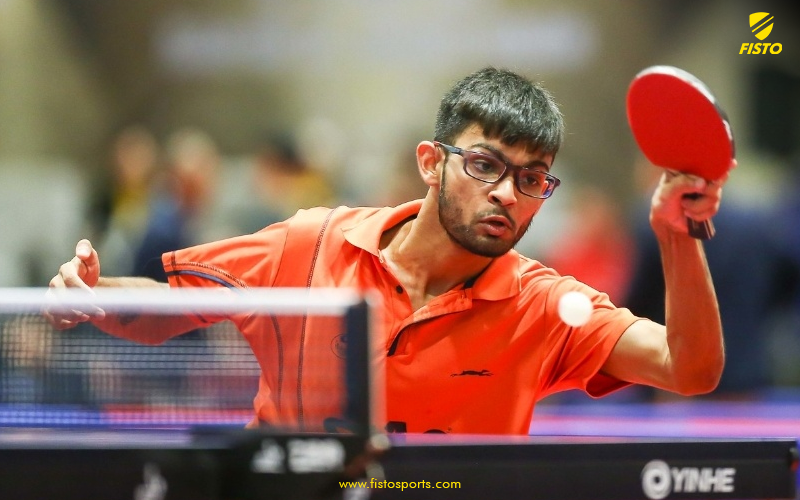 Manush Shah has showed impressive presence of mind, suggesting a long run for the lefty paddler.

Having explored his potential at a random game with his father, the youngster has scaled various peaks in ten years at the National and International levels, including his storm into the Top-ten rankings in the World at the Junior Category of the sport.

The nineteen-year-old has made his cut into the seniors and has represented India at various tournaments including the Commonwealth Games. Currently ranked 54th at the U-21 World Rankings, Manush Shah takes us through the path travelled thus far and shares his insights on the journey ahead.

How has the lockdown been for you and what are some of the things you have to  keep yourself active?

Yes, it has been quite a tough few weeks from a player perspective, but I’m glad that I got quality time to spend with my family after so many years. During the initial stages of the lockdown I worked out once a day with my home equipments, but after a few weeks I managed to get a table and a robot. I can play with it in my home. I also help my mom in household chores and I’m also working on mental strengthening.

When I was ten years old, I went on a family holiday. My father invited me for a game of Table Tennis and at the very instance he spotted the potential in me and understood I could make it to professional levels. On returning back home, he asked me to join the Deesha Dynamic Table Tennis Academy. I learnt the under the tutelage of my coach Shailesh Gosain who helped me build a strong base. It has been years since I started and there’s no looking back thereafter. Have you wanted to try a hand in other sports also if so what sport is that?

I was a big fan of cricket, but I think I’ll be very bad at playing it.

How did you feel on breaking into the Top 10 World Junior rankings?

Breaking into the top 10 was a great moral boost for me, from there I wanted to climb the ladder to No.1, but unfortunately, I injured myself and so I couldn’t play at the World Junior Championship.

Which match do you consider the best match you have played thus far in your opinion? Can you explain your Common Wealth Games experience on a whole?

Commonwealth Games experience was very memorable for me because firstly it was conducted in India and it was the senior tournament I played after a long time. I lost to a player from Singapore in a very close encounter, but I learned a lot form the tournament and I the experience I gained helped me play better in further tournaments.

Read: Suhana Saini - 'I'm not satisfied with what I am today… the sky is the limit'

What are your short term and long-term plans?

In the immediate next I want to breach into the top 10 in Under-21 and come into the Indian men’s team and in the long term I want to make into the top 200 in the world in senior category and ultimately play the Olympics.

Having made a cut into the Senior levels, what are the major challenges you faced on the transition from Juniors to seniors?

I feel physical and mental strength are the two things which a junior need to improve to make a mark at senior level. In the initial stage of the senior tournaments, I believed in myself that if I can play my best table tennis and that I can defeat the top Indian players. How supportive of an atmosphere you had in your formative years and who were your pillars of support?

Firstly, I would accredit the sacrifices made by the parents due to which I took up my sports and carved a career out of it. It is my biggest motivator.  Secondly, my grass root level coach Shailesh Gosain who helped me create a solid base for my game. Also the support I received from the Sports Authority of Gujarat, Gujarat State Table Tennis Association, TTFI, SAI, AAI and Virat Kohli Foundation has been very important to my game and success. I am extremely grateful to all my pillars of support.

How would you describe your playing style and game?

I am a left- handed player with an attacking style mainly, combined with confusing serves.

How do you control your nerves during a long rally?

I generally try to keep calm during the rally and express myself after the point gets over. I believe in staying under control in order to win the point but at the same time it’s important to show the will to win. Who is your biggest inspiration you look up to and what impact to they have on your career?

My biggest inspiration will always be Virat Kohli. He just raises the fitness standards of all the athletes and also helps us channelize our aggression in a positive way and always leads from front.

What do you like to do when you’re not playing Table Tennis?

I like to watch Taarak Mehta Ka Ooltah Chashmah and Kapil Sharma show In my free time and play online games. I love reading as well.

How do you consider the Table Tennis situation in India?

In the past few years, the scenario has changed drastically. Top Indian senior paddlers are performing so well at the international level which inspires me and other young paddlers like me to perform even better. Leagues like Ultimate Table Tennis has been really helpful and provided the privilege to meet senior players of other countries. The Gujarat Super League initiative is also really interesting and will be of immense help.