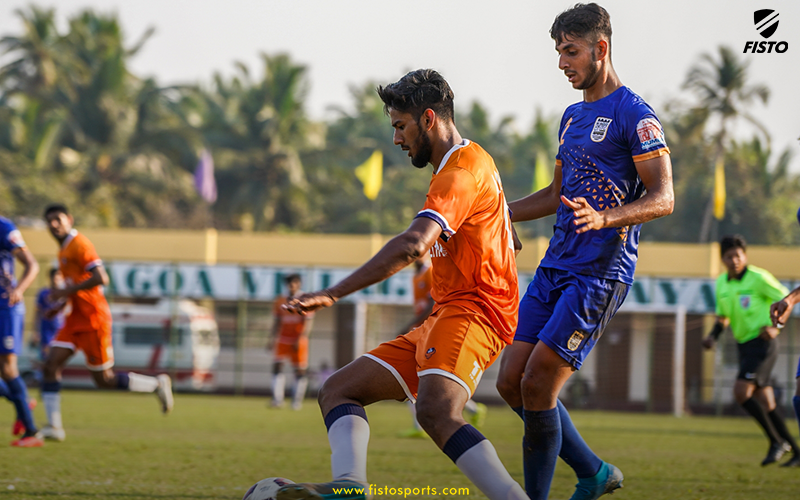 Advait Rai: ‘Football has taught me to always push forward, not to waver nor capitulate’

One of the newest talented defenders to come out of Maharashtra, Advait Rai is one of the centre backs at Mumbai City FC youth setup, has made great strides since joining the club in 2018.

The central defender has been a near-constant part of Mumbai City FC’s youth team’s backline in the recent years. Advait rose through the ranks at Air India youth team before moving to MCFC’s U-18 team. He’s represented Maharashtra in Santosh Trophy, most recently playing for Mumbai City FC Reserve team.

With a modernised touch to a traditionally defensive role, Advait is fairly comfortable on the ball, with a willingness to play and receive passes along the ground. His understanding of the game has vastly improved since he joined the Mumbai-based club, but there’s a lot left to be desired.

Good in the air and certainly no slouch, it is Advait’s intelligent positioning and exceptional timing that are his real fortes.  These attributes allow him to step in and intercept balls rather than make last gasp challenges, contributing to his aforementioned elegant style.

As Indian football continues to gain momentum, the importance of both physicality and tactical understanding is paramount, the early signs in both these fields are positive for the youngster, consistently maintaining it and growing is key for his career to be defined.

For now, the main goal for the Pillai College of Arts, Commerce and Science student has to be to become an undroppable presence in the reserve team and ultimately making his way to the first team and a Hero ISL debut. His energetic performances have definitely put him in the spotlight, but he’s got a long way to go if he is to establish his place there.

I am sure lots and lots of hours of deliberate practice have gone into becoming what you’re today. How do you define your footballing journey till now?

I have always enjoyed playing football and eventually thought of trying it out. I soon realised I was pretty good at it and my performances kept getting better, so I thought ‘why not!’. I would say that without hard work and dedication you cannot achieve what you dream of.

Who was your role model growing up and how did they influence the way you play on the pitch?

My dad was an inspiration for me. He passed away before I was born but I heard stories about him which inspired me and gave me the motivation to play this game.

How do you balance academics and football? Is this difficult? And how supportive your college and staff helping you in your sporting endeavours?

No, it wasn’t so difficult because my college and staff were really supportive to all the players.

Who have been some of your strongest backbone or pillar for your sports career?

My mother and my brother have been my biggest supporter through in my journey. Both have been the foundation and been my backbone in supporting every decision I have made so far.

You have been great and such a revelation since joined Mumbai City FC junior side. How does feel to play for the club? Tell us a bit about MCFC journey and the transformation within yourself and the beautiful game?

It feels extremely great to play for the club. I have learnt a lot playing here under my coaches who guided me.  And the best thing about MCFC is that the level of competition is much higher. Playing against better players improved my game. I am also playing in a lot more tournaments. My coaches have played a huge role in my growth as a player.

My love and passion towards the game which makes me give 100% in each and every game I play.

I would recommend people to come and watch me instead of me describing my own self.

Is there one moment in your playing career that brings a smile to your face?

There hasn't been one special moment in particular for me. I enjoy every moment that I am on the pitch with the team.

If you could go pro in sports other than football, what would it be?

What’s the single greatest lesson football has taught you about life?

Football taught me how to deal with the aches and pains in life. No matter how small or big the team was there for you. It has taught me to always push forward, stay the course, not to waver nor capitulate.

Biswamitra Chongtham: 'I want to be a world champion'