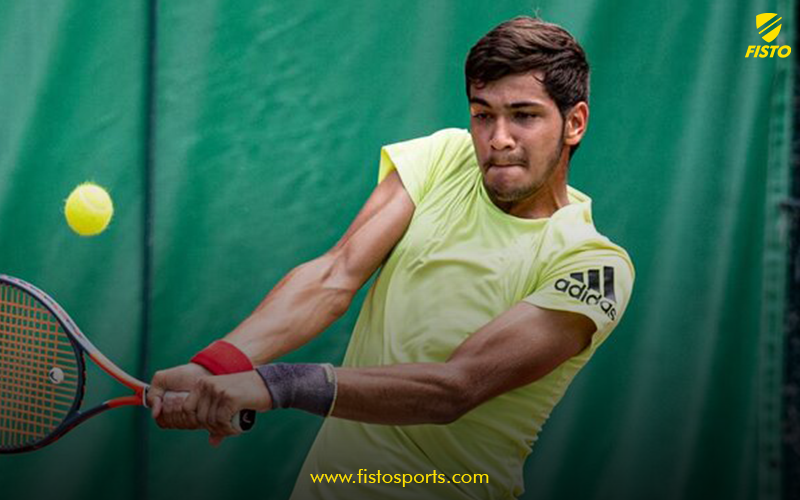 Even among the wealth of prospects that Indian tennis turns out each year, Sushant Dabas appears to be a special talent who now perhaps comes with the greatest amount of expectation.

Being an attacking baseliner, his game style can be likened to the likes of Rafael Nadal, Novak Djokovic, and Andy Murray but there is more to Sushant than just brute force.

Hailing from Gurugram, the elegant young tennis talent has amassed over 200 trophies in all categories in his nascent career so far and has represented India in the Junior Davis Cup (Asia-Oceania).

He was part of the Indian team which secured the second place at the International Club of Tennis Tournament (Asia-Oceania). Doubles winner at the Adidas Junior Nationals (U/18) and doubles Runners Up in various ITF grade 5 events.

Calmness, size and aggressiveness combine to form his primary style point, but where Sushant’ style really sets itself apart from his contemporaries is in his almost-swashbuckling confidence.

The Maurya School student is an incredibly quick player. But not just with his feet. His mind is always aware of what is going on around him. He is well aware of how to wield his size and strength to his advantage as well as how not to overextend his zone of coverage. It isn’t just a matter of being talented with the ball, his movement off the ball and his ability to gel with the ebb and flow of the game is invaluable, especially at the young age of 17 and he is certainly a name to keep track of for the future.

How long have you been on the tennis team and why have you chosen this as your sport?

I have been playing tennis for almost 10 years now. So basically, I chose tennis because, firstly it’s an individual sport, so your performance is dependent on how hard you’re willing to work during practice and in a match. Secondly, tennis is the best sport in terms of keeping your body fit as it works on all areas of the body, be it endurance, flexibility, strength and speed.

So, what has been your biggest challenge or set back while playing tennis?

Not being able to perform well for the country in the Junior Davis Cup has been my biggest setback. I didn’t increase the level of my game when I had to while my opponents did, that pretty much would cost me the match. But I have been learning from my mistakes and staying positive and I am confident that I will do well when I will get the opportunity next time.

What is the role of your coach/parents play in shaping your tennis career?

My parents and my family in a whole play a huge role in my life. No matter what at the end of the day I know that they have my back and they always will. I have learned a lot of things off the court from my family that help me when I am on the court.

My coaches have basically been my second parents. They have always helped me through the ups and downs that I face on and off the court. They have helped me grow not just as a better tennis player but also a better person.

Tennis, a sport known for rapid-fire rallies, sprints to the net and fast-twitch lunges, or bathroom break– which one is your favourite.

Well, for me it would be rapid-fire rallies and sprints to the net as I have a good feel on the ball and I move pretty well on the court. So basically, you have to dictate the point with your strikes and also move well when your opponent is dictating.

How would you describe your playing style, and which tennis player would you compare it to?

I would describe my playing style as an Attacking Baseliner. I like to dictate the point from the baseline defend from the baseline if I have to and then move in towards the net to finish the point. I think Rafael Nadal, Novak Djokovic, Andy Murray have the same game style as mine.

Yes, it is very important to have a favourite stroke as that’s the shot that you can rely on during the crunch time of the match. You will definitely be confident while going for that stroke, that is why it is your favourite stroke and hitting the strokes that you’re confident about is what wins you matches.

What is the best that Tennis has given you?

Tennis has taught and given me a lot of things. Firstly, it has taught me that no dream is too big to achieve only if you are willing to work hard for it with all your heart, as the saying goes – “Aim for the moon, even if you miss, you might just end up hitting the stars.”

And secondly, tennis has given me some crazy friends, brothers rather. I am grateful to tennis for everything.

If you were to change any aspects of your game or physical conditioning during your formative years, what would that be?

How do you balance academics and tennis? Is this difficult?

I think I manage tennis and academics just fine. It is always tough to make time for both as sometimes the physical strain and other times the mental strain is just too much.

I have not started my college journey as of now so I cannot really compare it with the school journey. But I can tell you that my school journey has been one hell of a ride. I have had some really great friends at school and some great teachers, they have always been supportive and have always helped me to better manage my tennis even with all the studies.

Is tennis more of a physical game or mind game? How do you see it?

Tennis for me is definitely more of a mental game than physical. You can break even the fittest players in tennis if you have the mental strength required to do so. For me tennis is 70% mental, 20% physical, 5% tactical, 5% technical.

What has been the greatest match moment in your tennis career?

I have had two great moments in tennis. First one was when I won the U/16 Nationals in 2018 and ended up holding the #1 position in India for almost the whole year. The second was when I won my first match against Indonesia in the Junior Davis Cup while playing for my country.

Non-tennis players that you admire the most and why?

I admire Virat Kohli a lot because of his attitude when he is on the field playing for the country. I admire how he brings the intensity in the game and also how he inspires each and every player of his team.

I would love to partner Mr. Akshay Kumar for a doubles match simply because of the fact that he is 53 and is still so fit and so humble.

For doubles, the best volleyer are the Brian brothers, for singles, it has to be the all-time GOAT Mr. Roger Federer.