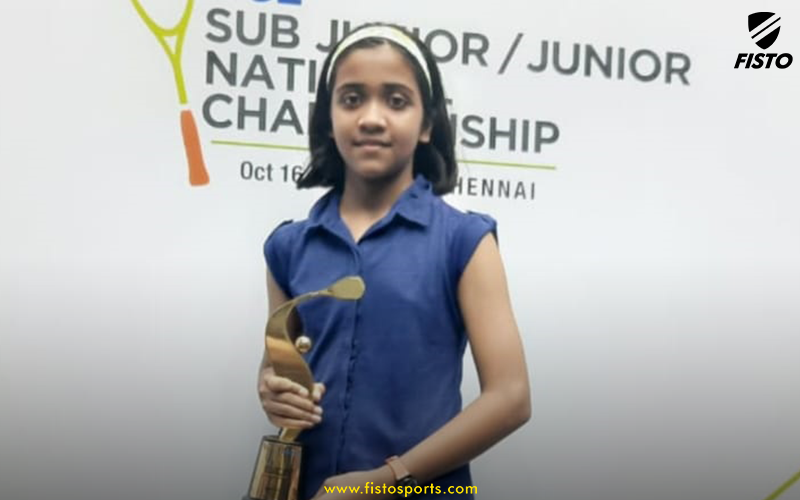 After an eye-catching 2019 that earned Akanksha Gupta multiple first-place finishes, also saw her staking a claim as one of the best Squash prospects in India. The 12-year-old looks to be the start of a highly promising career.

Akanksha’s strength is well complimented by a sharp mind and a keen sense of awareness. The Maharashtra native is brilliant at reading the game as it unfolds around her. The pace, movement, work rate and knack of getting into the right spaces and the right time she displayed over the past two years won’t have gone unnoticed.

Naturally, she still has a bit of growing to do given her tender age, but still a lot of potential left to realise, and Akansha Gupta is seemingly one who can be tipped for bigger things.

How did squash happen? Did you play any other sports growing up? And how would you define your journey till now?

At first, I was not into squash and did not know much about the game but when I used to go to the clubhouse, I saw senior players playing over there a couple of times and thought about trying the game myself. Then I started playing squash and found the game really fun to play. This was how I got into the game and started liking to play it and then played tournaments.

Growing up, I played many sports but at a competition level, I used to do roller skating (in state/national level). My journey till now has had many ups and downs but it has been amazing and I have loved it. I hope to train harder and achieve much more in the future.

In squash, I have had two role models (one each in men and women) who are Ali Farag and Nicol David. From other sports, I would say Virat Kohli (Cricket) and P.V Sindhu (Badminton) because of their sheer grit and determination and all the hard work they put in and the tough mental strength that they have and in terms of their achievement.

How would you describe your playing style, and which squash player would you compare it to?

I don’t have any specific playing style. I don’t only attack or only play defensive. It is like a mixture of both, depending on the game situation. And I think I would compare it to Saurav Ghosal (squash player from India).

Competing at such a young age, how did you juggle studies with sport? How supportive your school/college in your sport?

Competing at such a young age, time management was the main factor due to which I was able to balance studies with the sport. Even to remain focused when I am studying or playing and by planning out my day into parts (like a time-table).

Yes, my school is supportive by allowing me to compete in tournaments during the school days and by giving me an exemption from exams if any of my tournament comes in the exam days.

How is squash training different in India compared to other African and European countries? Which style do you prefer and why?

I have limited knowledge in this as I am yet to explore and hopefully pick up some good inputs from each style. I would like to mix up my game pattern.

Yes, I do have a favourite win. It is winning the Junior national 2019 in the girl’s under-11 category because it is my first junior national title.

What was your longest rally? And how do you control your nerves during a long-rally?

My longest rally would be of some 15-20 shots in a tournament in 2019 and 2020. I believe that during a long rally you just need to be focused, play your shots which you have learnt during practice, make a good shot selection and make your opponent run and play on his/her weak points and obviously put in your effort.

Is it important to have a favourite short? What’s yours then?

My favourite shot would be cross kill from the back; and one more would be when I am doing a service, I like to play a lob serve which hits the side wall and just dies at the back corner.

I am sure that there are times in training that you aren’t achieving the results that you want. What do you do to lift your spirits during such times?

Yes, there are times in training when I have not achieved the results that I want. During those times, I just try to keep myself calm and think over where I am going wrong. If I still don’t understand then I ask my coach/senior player about how to make it right. Then in the court, I just start with some basic drills related to the area in the court where I am making mistakes.

If you were you change any aspects of your game or physical conditioning during your formative years, what would that be?

I am still in at a very early stage. But I keep exploring new things and try to improvise in my game.

When the opponent has taken a sizeable lead, I would like to still play my game and try and stick to the basics and go for the kill as per the situation. Being only ultra-aggressive may lead to me tinning the ball more often. I would also go for a couple of surprise shots/service.

Any memories from school that you cherish a lot?

All days at school used to be super fun, but the best ones were when we had some picnic/trek or any festive like celebration (teachers/children’s day and etc).

I have generally noticed that you are a relatively calm and quiet player. Do you think this is beneficial to your game? Does it bother to you when your opponent is very loud?

It doesn’t really matter to me whether an opponent is calm or very loud and keeps shouting because inside the court it is the game (with the shot selection, movement) that you play which decides whether win or lose and not the amount of noise or actions you are doing in the court. It is just that you need to be focused on your game and play it with your full effort.

What can we look forward to seeing from you in the distant future?

To play and succeed internationally.

Which celebrity do you want to team up for a doubles match:

Depends from time to time. However, will prefer more Practice matches

Backhand, Forehand, Serve, Volley- which comes more easier to you:

Mistake made most often during tournaments:

Volley drops or kills going on the tin (mostly when losing)