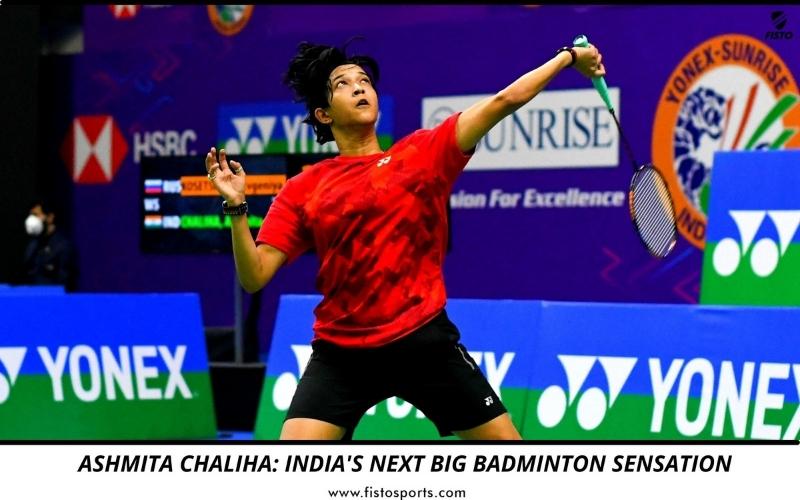 The 22-year-old shuttler from Guwahati has had a rapid rise from relative unknown to blue-chip prospect and may very well be the next big superstar in the women’s singles category of Indian badminton.

Indian Women’s Badminton has exploded in popularity in recent years, and there has never been more opportunities for ambitious female shuttlers to make their mark in the professional game.

One such name is Ashmita Chaliha, a 22-year-old shuttler from Guwahati, who on Tuesday, registered one of the most significant results in her career so far after defeating fifth seed and world No. 28 Evgeniya Kosetskaya in straight games 24-22, 21-16 on the opening day of the India Open Super 500 event in Delhi.

“It was a long time coming, and it was hard to stay motivated with all of the lockdowns because I was just waiting. This is one of my biggest wins. I have played against her [Kosetskaya] before and lost in straight games at White Nights in the semifinals.”

“I haven’t played a lot of matches in the last few years. The stresses of being absent from playing a major tournament during the pandemic were and are still obvious. So, I was nervous and that affected me midway in the opening game. But once I won the first game, I was more confident and so I was relaxed in the second game.”

Adjusting to her new life with multiple lockdowns and keeping up with the pace wasn’t easy given in the last two years, there have been hardly any tournaments. However, she is relishing being a part of the red-hot scene that is women’s badminton.

“It was tough because we were only practising and there were no tournaments. It was torturing, because we wanted to compete more. After 2020, when I had to play a tournament in 2021, I got COVID. It was really sad, tournaments getting cancelled.”

She will now face France's Yaelle Hoyaux who defeated Riya Mookerjee of India.

From the moment she first stepped onto the badminton court and picked her first racquet when she was seven, Ashmita Chaliha knew that she had found her calling.

“Sports are an integral part of my life and I just can’t do without it. Although, I play badminton for a career, it also helps me relax and unwind.”

Ashmita, who started playing badminton out of passion to pursue it as a career when she started winning tournaments in the state and national levels. It was then that a sense of professionalism set in, but she did overcome many challenges and obstacles in her journey.

“I had to face quite a lot of difficulties while choosing my sport as a profession as it attracted heavy expenses in travelling as well as in participating in tournaments.

The Guwahati native burst onto the scene in 2019 National Badminton Championships when she out up a valiant fight to Sindhu in an intense 38-minute battle in which she lost 10-21, 20-22.

Talking about her inspiration, she says, “I idolise Lee Chong Wei for his noteworthy career in badminton. His remarkable game has given me inspiration and passion for the game.”

“Apart from him, my father is my biggest inspiration in life. He has been there for me, he has probably been the biggest influence on my career. His innumerable sacrifices, along with constant dedication and unwavering faith in me, have always been my driving force.”

Hopes to break into the top 50 this year

The plan is to keep learning and playing as much as possible. Currently ranked 84 in the world, Ashmita isn’t getting ahead of herself and knows the importance of pacing her career correctly:

‘To be honest, every day I pick up something different and I learn something new every session. Particularly after my last match, there are a few things I have been working on, putting on pressure and keeping a higher pace, for example.”

Her life has changed so much during the pandemic. Without restrictions, it would have moved even quicker. But 2022 offers Ashmita hope and plenty of it. The rough diamond of talent will evolve further in the next 12 months. Under the guidance of Indonesian coach Edwin Iriawan and being able to play with the experienced players and others on a daily basis will only see her career go in one direction.

“Playing a tournament after a long time, I have not planned much for the future. For now, my aim is to come into the top 50.”

Be sure to keep an eye out for her at the ongoing India Open Super 500 event but if you can’t, I wouldn’t be too surprised if Ashmita is a name you see lighting up your TV screens for many years to come.