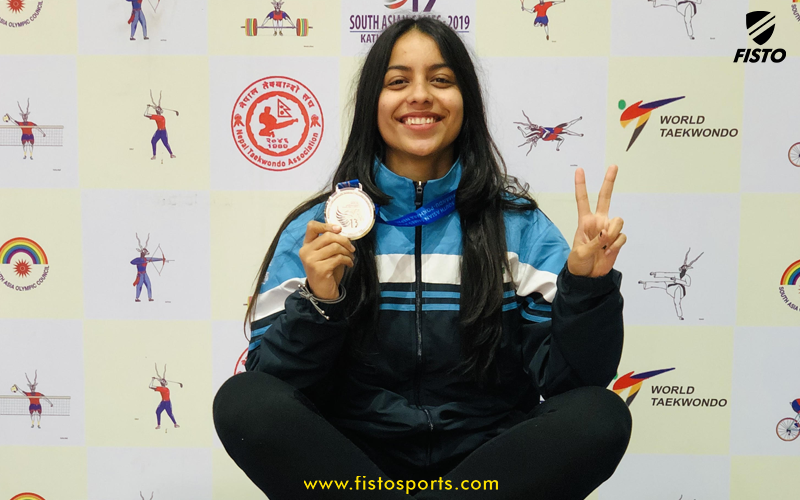 The performances of young Taekwondo athletes in India in recent years have been extremely impressive and Gaganjot Gill is another example of a youngster stepping up and consistently delivering at the highest level.

Hailing from Haryana, Gaganjot, like so many other athletes, has a lofty goal to represent India at the 2021 Olympic Games in Tokyo, Japan and then win a medal for India.

You could say Gaganjot Gill was born to be a taekwondo practitioner. His father, a practitioner in his own right and young Gaganjot started attending when she was three years old.

The 23-year-old from GMN College, Ambala Cantt, Kurukshetra University, believes that training with his father allowed her to improve her physical strength at a very young age. Her first taekwondo love was the excitement of sparring bouts between two practitioners. But as she travelled around the world to compete, she says she found other reasons to be excited.

When she was 6 years old, Gaganjot competed for the first time at the national level, and in 2006 she won her first national medal. From this moment on, Gaganjot’s taekwondo career really began.

The youngster has built on that heritage and made a place for herself among her peers, progressing through the age groups winning many accolades including a silver medal in 13th South Asian Games 2019, she has participated in 11 International Tournaments and 39 National Taekwondo Championships and won 13 gold, 7 silver and 3 bronze medals and four gold medals in Haryana State Games. Quite a CV.

Gaganjot thinks that a big part of her success is thanks to her parents, younger brother and coach undying support throughout her journey.

While she's currently training to get back into her best form, Gaganjot eyes are on the Olympics, she is aiming to qualify for the Tokyo 2020 Olympics and going to his many national and international tournaments as she can and hopefully, she will have enough points to go to the Olympics, but only time will tell.

When did your Taekwondo journey begin? How did you find out about Taekwondo?

I started training Taekwondo in 2000 because my father taught me when I was like three-years-old, I practiced the moves and sparred with him. And then at some point, I decided to take it more seriously and joined a local club. Eventually, I trained my way up to the national level and finally attended my first international competition in Egypt in 2012.

Who were your first Taekwondo heroes? What was significant about their achievements or character that you admired?

I saw my father as an idol and my hero.  From the very beginning, he was my only inspiration; throughout my journey, he kept on motivating me and supported me in every possible way.

We all know that you are successful in your sport. But the first win and the first trophy is always special. Do you remember your 1st success as a Taekwondo athlete? If yes, how will you describe that moment?

I got a silver medal at the age of 5 at the State Championship that I could not remember but when I see the certificate of that achievement, I do feel very proud.

Can you share with us what are your biggest influencers during your growth? Who are the people behind Gaganjot Gill that helped to achieve so much?

There have been many, but I think the biggest would be my coach Mr. Jagdeep Singh and my younger brother Bhavjot Singh plays a very important role in influencing me. They both helped me grow and perform my best mentally as well as physically. My brother is my partner with whom I work out.

What would you say is you're fortè in taekwondo (e.g., nunchuck, form, breaking, or sparring)? And what makes you think so?

It is hard to pick just one, but I am very proud of my sparring because I have been doing this since childhood, that's what I do best.

How would you describe your Taekwondo style – more attacking or defensive, and which a Taekwondo athlete would you compare it to?

I am a more of a defensive athlete but you have to change and adapt according to the game and your opponent. I have always really loved strategy games. I think the way that I play Taekwondo and the way that I play strategy games is very similar, and they both kind of scratch the same itch – act and adapt according to the opponent.

Do you think that taekwondo is better than kung fu and karate?

It is not about what is better and what is not, for a sportsperson their game is superior, all games are equally important and what you connect with is more important.

It helps me relax and releases my stress. I can also defend myself in every possible situation.

Even if a person reaches the pinnacle, there is always scope for improvement. And in sports, you should improve daily. A healthy competition or rivalry often helps a sportsperson to improve. So, who is that athlete with whom you have a healthy rivalry?

I kind of keep on changing my weight category so, it is every time a new opponent or competition for me. One should improve daily, there is no limit to how good you can get in pursuit of perfection.

How does participation in Taekwondo or sports generally benefit other areas of life?

Mostly it makes me mentally and physically strong, increasing my patience on how to react under stress and defend yourself.

You won many tournaments and proved that you are one of the best in the country, can you share in your professional career, which has been 2 standout moments that have made you feel on top of the world?

2)    The very first time when I got gold in Senior National Championship in 2014.

What goals have you set for the rest of 2021 in terms of Taekwondo?

My future plans are to further improve so I can become a top athlete at the World level.  My current goal is to qualify for the Tokyo 2020 Olympics and win a medal.  My next is to receive a medal in any World competition or/and Asian Games.

What is your go-to kick?

Non-Taekwondo athletes that you admire the most?

My fellow players in university.

What would you be if not a Taekwondo athlete?

I would be a regular student who would be playing for IPS or IAS.

I do not watch that much television but I like comedy.