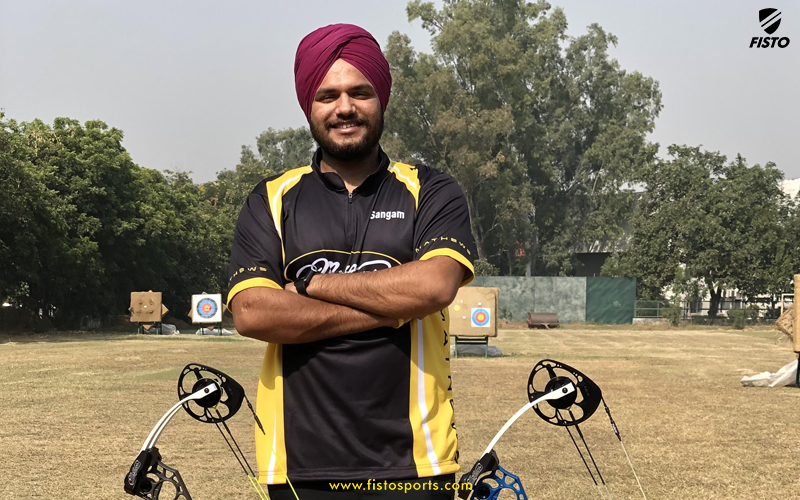 Indian Archery boasts quite an array of promising young talents, Sangampreet Singh Bisla is one of the precocious and highly-anticipated talents.

One of today’s best young compound archers in the country, Sangampreet Singh Bisla comes from a farming family. It all started when Sangampreet found a bow as a kid, and started playing around with it, chasing anything he could.

When he began playing the sport in 2013, he was a novice but thanks to attention and guidance given by his coach he began to show more interest and discipline in learning the game.

The Patiala-based archer burst onto the elite stage in the recent years and showed why he is likely to be tipped as one of the main prospects for a medal at the Asian Games in two years' time.

He won the team bronze medal in the Men’s compound team event along with Sukhbeer Singh and Tushar Phadtare at the World Archery Youth Championships in Madrid, 2020. The Indians trailed by a point leading into the final set, before shooting a flawless 60, to clinch the decider and the bronze. Sangampreet Bisla was also a gold medallist in All-India University Championships and Khelo India Youth Games respectively and looks to have all the raw attributes to be a star in the making.

Extremely humble and coachable, the 21-year-old B.A English degree holder from Khalsa college Patiala seems only set on working hard and improving as an archer. That might be what will set him apart from other young promising talents.

With a long way still to go in his career, Sangampreet certainly has the qualities to compete for honours in this sport. It is the combination of a dream and hard work that eventually fuels the way to the star! Sangampreet is one such dreamer, who will be able to take their talent to new heights through hard work and determination.

When did you actually decide that you wanted to be a professional archer?

When did you take part in your first international competition?

My first international competition was at the World Cup stage 1 in April 2018.

Despite your young age, you seem to shoot well under pressure. Please tell us about your mental game.

It is like I never think of shooting a certain score or compare myself with other players. I cannot control these external factors so I focus only on my form and think of giving my best.

Do you think that shooting in the senior circuit allows you to sharpen your experience and your archery level?

We all know that you are successful in your sport. But the first win and the first trophy is always special. Do you remember your 1st success as an archer? If yes, how will you describe that moment?

I started archery in the year of 2013 and I won my first medal in December 2017. At that time, If I had not won any medal I would have given up and moved to a foreign country. But within I have never wanted to leave archery so that very moment was actually a turning point which made me realise that giving up is not an option and I continued my game.

How difficult it is to stay at the pinnacle for a long time? How do you fulfil people’s expectations?

It is easy to give a great performance but to maintain that performance is difficult. To maintain a peak performance, it takes a lot of sacrifices. And it is only possible if we are determined and continue focusing on our performance even at the peak so that we could maintain it for a longer period of time. So, I would only say that never lose your focus at any point of time if you want to fulfil first your and then everyone’s expectations.

When a person is passionate about something, that thing is like a life for him. We all know that you are extremely passionate about archery. What are your feelings when you take the equipment in your hands?

Passion is the only thing which keeps me motivated all the time towards my game. So, whenever I have my equipment in my hands there is only one voice in the head that – “I can do it and I will give my best!”

Archery is a sport which requires extreme concentration and focus. If you lose even 0.01% of it, you miss the target. How do you manage to maintain both under pressure situations?

It is true that if you lose your focus even slightly you will miss the target. I also sometimes lose my concentration and get frustrated. And this thing affects the next shots you are going to take. According to me, it can be tackled by playing as many matches because you learn to control that certain situation and get aware of its effect on your next shots so that you act accordingly.

Even if a person reaches the pinnacle, there is always scope for improvement. And in sports, you should improve daily. A healthy competition or rivalry often helps a sportsperson to improve. So, who is that archer with whom you have a healthy rivalry?

Yes, there is always a scope of improvement and you need to improve daily. Your healthy competition is not only the person who has the highest rank. Very often a person with the lower rank defeats the person with higher rank during matches. So, for me, every archer in the field is capable of something.

Where do you see Indian archery in the next few years?

What is your main aim? Which is the main tournament which you consider as the most important one?

How much time do you spend each day/week/month shooting your bow?

I shoot 6 to 7 hours a day and usually take Sundays and a session off on Wednesdays. On any day, in a month, If I feel more exhausted or tired, I take a day off and rest.

When you are standing on the line, how do you determine a target is 43 yards out instead of 41?

Which is the category or event you like to participate in the most?

Archery: Atanu Das stuns Olympic champion Oh Jin-Hyek to progress to round of 16