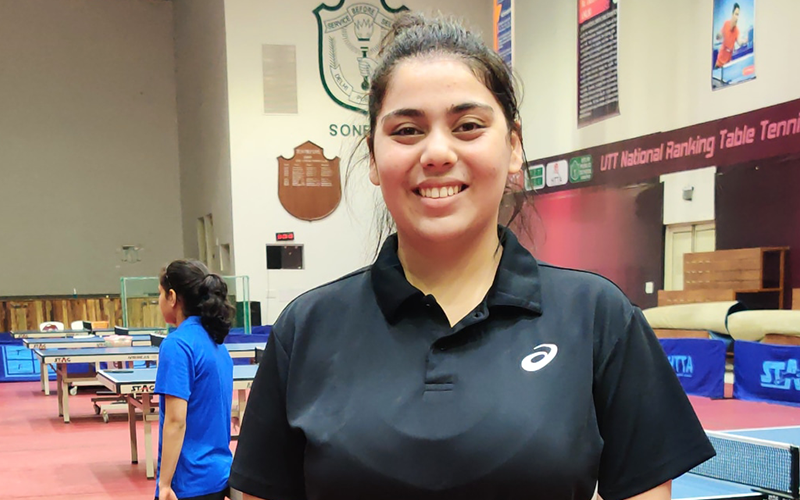 India are not short of Table Tennis talents and they now have another poised to roll off the Indore conveyor belt in Anusha Kutumbale.

Anusha Kutumbale is a young Indian rising star in the world of table tennis whose career is now stacked with 10 international medals and 23 national medals, she was ranked No.1 in Junior, No.3 in Youth and No.6 in Women’s category in 2o19, besides having the distinction of being Cadet South Asian Champion.

The love for sport is no second-hand emotion. Anusha developed a love affair with table tennis because she grew up around it. His father used to play TT in a club for recreation. She has built on that heritage; the racket became her weapon of choice and her TT road led her down to some interesting avenues – progressing through the age groups with both state and the Indian national team.

The most impressive aspect of her game is that she reads the game well and anticipates situations accordingly.

Driven by passion for the game, with good and hard work harbouring dreams of competing at the high level, the -18-year-old paddler from International Institute of Professional Studies, DAVV, will have every belief she can make it to the very top.

I am sure lots and lots of hours of deliberate practice have gone into becoming what you’re today. Are you satisfied with your journey so far? What are you currently working on? And, what's next?

Yes, I am. Of course, I could have had done better. But it is in the past, one can't do much about it. I am satisfied with where I am today – learning from the setbacks, obstacles, and failures; keep trying and learning from each attempt. I am currently focusing on improving my fitness and agility on table. I want to climb up the national ranking ladder in seniors and also make a mark on the global stage.

Who is your favourite international table tennis player, from past or present? Why?

My favourite player is Liu Shiwen from China. She is the current Women's World champion. I think our playing styles are very similar. The blade I use is after her name.

Is there one person that has played a significant role in your success? If so, how?

My father has been my backbone throughout the journey. He is also my coach. He has everything it takes to keep me on the right track. Right from arranging practice session with different players to travelling across the country with me, he's done it all.

Great! Let's go back to when it all began ... Tell us about how you started with table tennis.

My father used to play TT in a club for recreation, that's where I took a liking for the sport and started playing myself.

Some players are very animated when they win a point. What's your style? Do you think it is better to cho/animated or stay quiet.

I am very quiet in the arena. I barely utter a word out during the entire match. I feel it helps me keep my focus.

Do you have a "go-to" strategy to keep yourself calm at a critical point in a game?

I don't have a go-to strategy as such. I am a player who develops as the match proceeds. So, it is different with every opponent; it is more about keeping my mind in the right state and understanding the situation and making correct decisions.

China dominates the table tennis scene currently. Do you think India will be able to match up to those standards? If so, what will it take?

I think that Indian Table tennis is progressing at a great speed. And I am sure India will match up if not be better. I think what we need is a batch of equally good players so that the domestic competition is thick and the standard of game rises. I think that is happening gradually and thus the level is also increasing.

Not as such. Of course, I am in competition with a lot of people but there is no rivalry.

What you like to do when you are not playing table tennis?

I watch some web series, read, write, hang out with friends and family. Just what a normal teenager would do.

If you could spend a day talking to and training with any player or coach from the past or present, who would it be and why?

It would be with Liu Shiwen. Like I said I am a big fan.

It was the first national ranking in Chandigarh and I won sub-junior, that was my first national title. So, I would say that moment when I won that game point, instead of a victory celebration I just had a broad smile on my face.

Who was the toughest opponent you have ever played?

Miyu Nagasaki from Japan. She is currently World No.1 in Youth category.

Back to the future