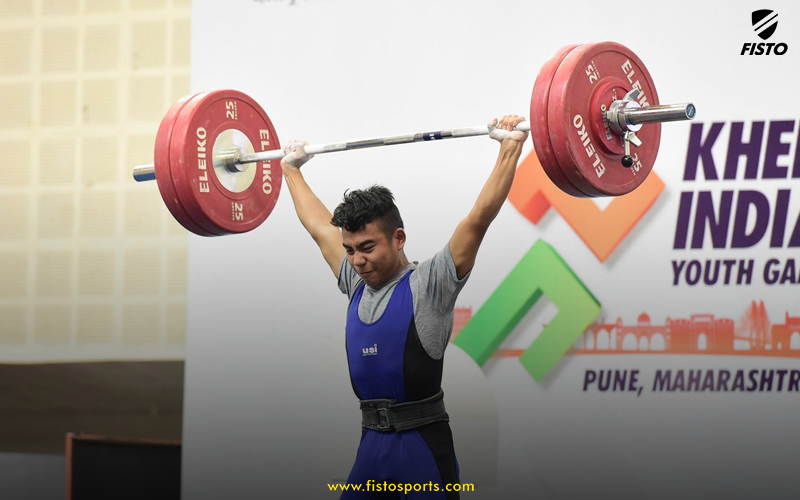 Northeast, as a weightlifting region is better known for producing world-class weightlifters but every now and again, we are treated to a quality weight-lifter. One such lifter is Mizoram’s Jacob Vanlaltluanga.

For Jacob Vanlaltluanga, lifting weights and expectations is no biggie, as his impressive CV attests to. With gold in Youth Commonwealth Championship 2019, Samoa, in 61kg category, a silver and a bronze in 62kg category at the Youth Asian Championship 2018, Uzbekistan, along with his nine youth national championships medal, four Khelo India Youth Games medal, four Junior Nationals medal, he easily burst onto the shortlists of top talents in Indian weightlifting with quiet aplomb.

After all, the past few years was all about wonderkids like Jeremy Lalrinnunga, Prashant Suresh Koli, Jyoti Yadav and PH Roshni but peer below them and you will find a number of highly promising talents waiting to make their mark on the game. Jacob is one of them.

Born on February 17, 2002, in the high hills of North Eastern corner, Mizoram, a state that has produced dynamic weightlifters, Jacob first started weightlifting in 2011 when Mizoram Sports and Youth Services Department organised a flagship program called ‘Catch Them Young’, he was one among the 60 kids to be selected and taught the basic of the weightlifting techniques.

Two years of honing his skills there prompted Jacob to take the uncommon step of staying away from his family and hometown at the age of 10 to move for the prospect of regular training at Army Sports Institute in Pune. Spending time out in Pune did wonders for Jacob, as the youngster truly took off and started stamping his mark on the sport. Coach Zarzokima put his faith in the youngster and he was repaid handsomely.

Blessed with the physical strength and mental toughness needed to be a lifter, it is the effective utilisation of his skills that makes him such a renowned prospect. Given his ability coupled with his fierce mentality and undeniable professionalism, the Army Sports Institute, Boys Sports Company, Pune, Maharashtra student will be hoping for his rapid development to continue to rise above the expectations.

Describe your weightlifting history. When/how did you start? Who have your coaches been? What championships do you have on your record? What are your best lifts?

I first started in 2011 when Mizoram Sports and Youth Services Department organised a flagship program called ‘Catch Them Young’ under my first coach Sir Malsawma. I was one of the few 60 kids to be selected and taught the basic weightlifting techniques.

My real weightlifting venture began in 2012, when I was selected to give trials at Army Sports Institute in Pune along with two of my friends, Only the three of us were selected amongst the 60 kids. Luckily enough we were selected and we began our training under Sir Zarzokima, who I still regard as my best coach till today.  Coaches I have had - I have trained under are Sir Malsawma, Sir Zarzokima, Sir Sekar Chendu, Sir Pujari and Sir Iqbal Singh.

I am lucky enough to have played both National and International level Championships in my weightlifting Journey some of which are Youth Asian Championships and Commonwealth Championships.

My best lifts include 120kgs in Snatch and 144kgs in Clean and Jerk.

Who did you look up to when you were coming up as a Weightlifter?

Growing up, I really looked up to Mr. K. Ravi Kumar as I feel he is a really disciplined sportsman who is dedicated to his sport.

Describe some of the obstacles you face, or maybe some things that frustrate you in weightlifting.

I started training in Pune when I was only 10 years old. Staying away from my family was probably the hardest for me as I would often get homesick. As for the game, I wouldn’t say I faced any hardships because we were given good facilities under the top coaches and we were taken proper care of.

What kinds of changes would you like to see, either personally or with the sport in general?

India has a lot of people living in rural areas or in small towns that are far from the big cities or capitals. Personally, I feel that children from these areas should be given more opportunities as they have a lot of talent to showcase. I don’t think we are penetrating through these areas to discover their talents and I feel the government should take more measures and focus on these areas. I have also noticed this same problem in my own state Mizoram.

What were your best ever training lifts?

I don’t always lift the same heavy weights in competitions as I do in training halls. My best training lifts would be 146kgs in clean and jerk.

What other things are you into other than Weightlifting?

I like playing the guitar in my free time.

Looking back at your school days and now, how did you think you evolved as a lifter and in what area do you feel you have improved the most? And what is something you want to add to your lift or get better at?

Not only as a lifter, but as a sportsperson in general, I would say I learned discipline as we always have to follow a strict diet plan and training routines. I also learned to have a competitive mindset.

As every weightlifter would have it, obviously, I would like to add more weights to my lifts. There are also quite a few areas where I need to improve my techniques as we need maximum strength to lift heavy loads every day.

How supportive are your school/college when it comes to Weightlifting?

I am currently enrolled under an army school which focuses on sports for the students so my school is really supportive when it comes to weightlifting.

How does your outlook on fitness translate to other parts of your life?

Usually, in most cases, a sportsperson would maintain a good body physique and for that, we need our body to be fit and always in a good condition. I would say it helped me in my health as I currently do not have any problems with my body physically.

Knowing I did well in competitions proves that my tough months of training and hard work did not go in vain and I am happiest then. The Commonwealth Championships I participated in Samoa would personally be one of the happiest I have ever been in my career. Going home to my family and the people of my hometown welcoming me at the airport entrance gave me immense pride,

Many lifters have routines, habits and superstitions before/during the lift. Do you have any individual quirky things you do before a lift or special items you carry with you in your bag that must go with you everywhere?

I grew up in a Christian family, so, I always carry the Bible everywhere I go. And, also before and after my lift in competitions, I would always pray. It is a must for me.

I plan to carry on in this sport for as long as my body would permit me to. I would like to actively participate in the upcoming competitions. As for my future in the sport, it’s all depends on myself, how I train and maintain my body and also maybe a little bit of luck as well but I do see myself winning a few more medals.

Snatch or clean and jerk?

What do you like to listen to when training?

Who is the greatest weightlifter of all time?

Knowing what you know now, what one thing would you change in your first training routines?

Earlier, I had a prejudice that I would not be able to grow if I lift heavyweights. If I could change one thing, I would like to get rid of that mindset I had sooner because had I not been afraid of heavyweights then, mentally I feel I would be more confident than I am now.