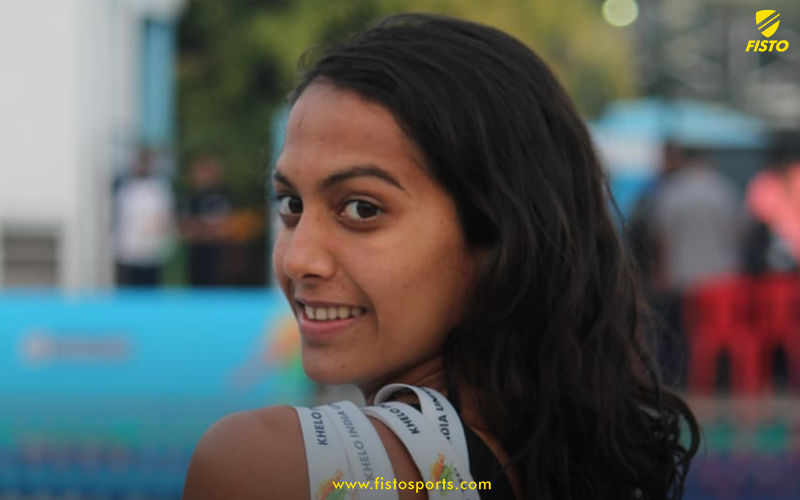 Jyoti Bajirao Patil is living her father’s dream. The doughty girl achieved what her father, Bajirao Patil, longed-for as a swimmer — winning a medal for the country.

Bajirao, a former national-level swimmer but couldn’t go on to represent India and a police officer is on a mission to not let what happened to him to his twin daughters, and is leaving no stone unturned to fulfil their dream.

Swimming is a sport where passion and dedication must shine above everything else. Jyoti and Aarti were just one-year-old when the two first exposed to water. At age four, the Patil sisters swam 35 kilometres from the Gateway of India to Alibaug.

And rest, as they say, was history. The first competition Jyoti was part of, a local one, earned her a medal at the very young age. That win encouraged Jyoti, who practised harder and went on to win laurels at the local, regional, state and national levels.

For Jyoti, each successful swim is an affirmation of the process. A testament to daily workouts.

Jyoti, who is currently studying at Ramnarain Ruia Autonomous College, Mumbai said her father never let her face any difficulty while pursuing a career in swimming. Her father himself a national swimmer and he always wanted to see their daughters as a good sportswoman and she has fulfilled his wish. Mother too has been supportive but she also insisted on focusing on education too along with swimming.

Overall, Jyoti clearly values the benefits of keeping her family close to her.

Fearless on the pool. Focused in the classroom. Unafraid of fulfilling her potential, Jyoti Patil continues to train assiduously with the hope of one day going to the Olympics.

At what age did you realise you were naturally sporty, and when did swimming become your strongest sport?

Our swimming journey started with our father; his name is Bajirao Patil. He was a great swimmer during his heydays and has been training us for 23 years. He used to take us to play in the water when we were one year old and he taught us the sport.

At the age of four, me and my twin-sister swam 5km in the sea from Sankrock to Gateway of India in 1 hour 30 min. So, our father realised that we both have that ability and spark which need to go ahead in swimming career. After that, we started playing club events then district level, state level and nationals. At the age of 14, we started competitive level practice.

In India, not a lot of people know swimming and it is a rare sport for people to participate in. Talk a little about the difficulties you faced.

A lot of people don't see swimming as a sport but as an enjoyment. There are very good swimmers in India but they can't go ahead due to lack of financial support and facilities. The government should take some measures to encourage the players.

When looking at where you were as a school kid to where you are now, what is the biggest difference you see with yourself?

When I was in school, I didn't pay much attention to swimming, but as the experience progressed, I began to focus more and more. Once I lost twice, I became stronger.

From your experiences, what is the best thing about being a swimmer?

Unlike other sports, in swimming at a time you have to compete with other 7 swimmers including you, so you must have a very positive mindset and a strong willpower.

We used to go underwater pull each other's leg during swim down.

My parent’s dream and their hard work is my real strength. The most important aspect of my sport is to fulfill our father's dream who wanted to win a medal at nationals but he could not achieve it because of some financial problems and lack of facilities.

Some swimmers are allergic to chlorine, which could affect the competition.  Sometime they face the pressure of swimming as the favourite. Did you or any of your friend’s encounter the situation and how do they control all that?

To date, neither I nor any of my friends have had any such allergies, even If someone has it, they take medicine etc. after consulting doctor.

It was very difficult when I was in 10th and 12th standard but with the support, I got from my parents, teachers, friends, I was able to handle studies with the swimming practice. I provide equal time and efforts to both.

Who were your Swimming idols when you first became interested in the sport? What was is about their character or achievements that you admired?

My idol is my father. He works as Mumbai police as well as our coach. In 2003, he completed sea marathon at Greece, Europe after 13 hours of continuous swimming and also won many medals in the police games, to gain knowledge about swimming techniques, he did NIS Patiala Swimming Trainer Course.

To whom do you owe your success so far?

Firstly, to my parents, my coach and then other members who have been supporting me a lot. My father is in the police and has been working night shifts for the last 22 years so that he can take our practice. My mother also works very hard and look after everthing from diet to swimming bag.

Which body part/muscle is your favourite to work on?

As my main stroke, breaststrokers need strong lower body and I constantly focusing on it but still, I love to work on the upper body like back, shoulders, biceps and triceps.

I have always watched other people work hard and succeed; our own example is our father. I have been making myself mentally and physically strong.

Yes, there is an advantage with lane position. Middle lanes –lane no. 3 ,4 and 5 consider as fastest swimmers’ lanes. The result is that middle lanes create more waves on corner lanes.

What would be some goals you would give your team for the rest of the year?

Always be honest with yourself for your game. Even if you lose, remember that failure is the first step to success.

JSW Sports in collaboration with DSYS, Govt of Odisha to launch a comprehensive Grassroot Program for swimming