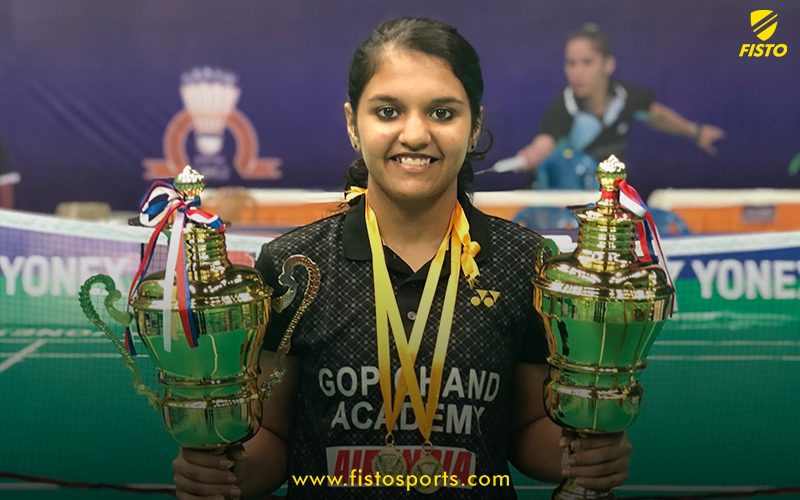 Mithula UK: ‘Badminton teaches us to take the wins and losses with the same face’

You don’t have to be an expert to know that over the years, Indian Badminton has produced numerous talents, and Prakash Padukone Badminton Academy have been responsible for producing and developing many of them. One of the latest talents to add to this list is Mithula UK.

Mithula came to the forefront in the 2015/16 campaign when she won a gold medal in U-17 girls doubles, U-19 girls doubles and U-19 mixed doubles at the Junior National Championships. This enabled Mithula to compete at the highest level domestically as well as experience the Asian challenge.

The deceptive twenty-year-old, currently pursuing B.com in Jain University, Bengaluru, is known for her craftiness in and around the court. She isn’t a slouch athletically, but certainly isn’t a freak of nature either. Mithula’s style of play is suited for modern Badminton particularly in doubles. She relies on her vision and technical abilities, adept at serving, smashing, and drop shot, Mithula has the dynamism and versatility a modern shuttler requires.

Already having won the girls doubles national title in all age groups and the U-19 mixed doubles title, playing regularly at the national level and seeming to be a candidate for the national team also; the future ahead for Mithula UK is bright. Right now, it is all about grabbing the opportunities she gets and establish herself as the great talent she is.

You are very young, and have quite a few titles under your belt, and I am sure it must have been a quite rollercoaster journey, so tell us about how you got into badminton at the first place, what inspired you as a child to take up professional badminton?

I got into a badminton summer camp near my house when I was 9. The coaches over there were impressed and said that I had the potential to play professional badminton and recommended me to a regular academy. It was fun playing the sport and I picked it up quite naturally thereafter.

Prakash Padukone sir was my first badminton hero. Fortunately, I had the opportunity to learn a lot from him directly. There were a few things that he would emphasize on such as the 3 ds’ which are determination, dedication and discipline; punctuality is a virtue that one must hold onto to and winning and losing does not matter as long as we have played our all.

My first victory was in Under-10 girls doubles category where I won a silver medal in the National Championship. I had been playing for only a few months but I ended up winning a medal. That moment was the push towards professional badminton that I needed.

What is the role of your coach/parents play in shaping your badminton career?

Coaches are an integral part of a player’s life. I have been very lucky to have been part of the two best academies in India for badminton. I was in Prakash Padukone Badminton Academy for almost 7 years and now I am playing in Gopichand Badminton Academy. These two academies are the reason for who I am today as a sportsman. My parents have been very supportive throughout my journey. They have always been there for me throughout all the low and high points of my career, none of this would have been possible without them.

I finished my 10th in Vidya Niketan School, Hebbal and am currently pursuing my B.com at Jain University. Both the institutions have been the greatest help when it comes to my studies. They have supported me in all ways possible. I am good in my studies only because of their constant support.

Services. It is one of the most underrated but vital aspects of our game and at the right time, I think it is one of my biggest strengths.

What is your approach when an opponent suddenly starts playing opposite to his strengths?

I try to keep calm and think of my own strengths.

I believe that all the players in the circuit are healthy competitors.

It teaches us important life lessons like being punctual, cleaning after yourself and perseverance. It also helps with boosting our self-confidence. It teaches us to take wins and losses with the same face.

In your professional career, which has been 2 standout moments that have made you feel on top of the world?

The first standout moment in my professional career would be in 2015 in the Junior National Championship held at Jaipur. I played 3 finals in that tournament and beat players 4 years my senior. (the maximum categories one can participate in is 3)

The second would be in the Senior National Championship in 2019 which was held in Guwahati. I was playing for the first time since a surgery, I was in a lot of pain throughout the tournament but I persevered and won a bronze medal there.

Do you have any snacks that you miss when in training camp and what is your typical daily diet when in camp?

My typical daily diet is dal chawal with subzi and some salad. I don’t really have any restrictions on eating which I am thankful for.

What are your plans and goals for your life in badminton? How do you see your future in the sport? Do you plan to stay involved in badminton for many years?

My goal is to become World No.1 and bring lots of laurels for our country. I hope to stay in the sport for as long as possible.

Non-Badminton players that you admire the most?

Deception at the net