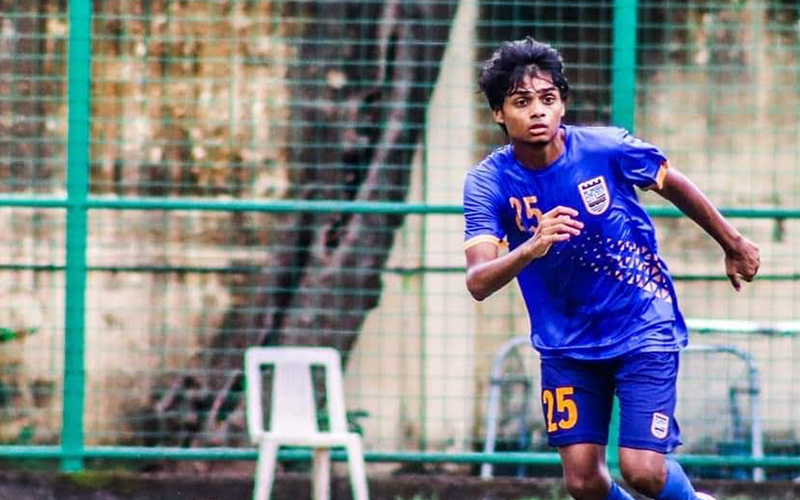 A very intelligent, complete midfielder – Pranav Pillai has been a staple of the Mumbai City FC Under-18 team who is likely to make waves soon.

Pranav was prolific at the RFYS Mumbai Zone: Junior Boys category as he claimed the Golden Ball as well as Golden Boot award in Mumbai, 2018 and he was part of the first National Camp of Reliance Young Champs. He also has represented Maharashtra in the School Games Nationals which was held in Jammu, 2019.

He was also part of the Maharashtra team that secured bronze medal in the Khelo India Youth Games held in Pune, 2019; state champion of DSO in U-19 category and he was picked up by the Mumbai City FC youth academy at a very young age. And over the years, the 18-year-old has done very well in progressing through all the junior sides at the club, playing in the Hero I-League 2nd division et al.

Originally a central midfielder by trade, Pranav wanders from box to box and tries to create more options for a pass with his movement. He is always looking for a solution and his creativity and explosiveness boosts the whole team’s performance.

The KC College student often tends to create good opportunities for his teams, sending smart passes in key areas and using lots of through balls in order to deliver the ball to his teammates. His ball control and decision-making are impressive, especially when a team need to deliver the ball to the final third, despite the press applied by their opponents.

Pranav has shown signs that he has what it takes to become a regular name for the Mumbai City FC senior side in the not so distant future. This and the next Hero ISL seasons is a little too soon for him but if he plays and performs regularly in the next two years then the sky is the limit.

At what age did you start in Football?

I was always interested in football since childhood. It came naturally to me. However, I started playing the beautiful game of football from when I was 12 years old, and since then the love for the game has burned inside me.

When did you say: yes, I will dedicate myself to football?

I remember school holidays, straight after school, weekends waking up, dressing, grabbing a ball, and finding anywhere I could just to kick the ball around. As a football enthusiast, I always followed and played the game with passion. However, I dedicated myself to football when I got selected in the state team of Maharashtra.

How your game has improved since joining Mumbai City FC?

After joining Mumbai City FC, I have grown a lot as a player and as a person. I was thrilled with the opportunity to continue playing football at the highest level and getting my proper training at the same time.

All the coaches and staff really helped me to reach my true potential. My professional game improved drastically after joining Mumbai City FC.

As a young footballer, who were some of the people that you looked up to for guidance? Who were the people you would speak with to get better at?

As a young player, I was very shy to talk to the coaches and ask them for advice. But my coaches Suprith sir and Mohan sir helped me a lot in my junior college days and at Mumbai City FC too. They always encouraged me to try new and innovative things. I am beyond grateful to the two for their willingness to improve my game. I have a lot of respect for both of them.

My parents never stopped me from playing football, but in the initial days, my studies were their first priority. But after getting into Mumbai City FC, they accepted that I have to go into this field for my profession. I cannot thank my parents enough for their unwavering support. They have been there for me throughout this whole journey.

Which footballers did you admire at the start, both at the local and the international scene?

I have been playing with and against Asif Khan from a long time, and he has been a huge motivation for me. At the higher level, I am a huge admirer of Radja Niangolan and I like the way he plays.

Yes, school times were tough but I am really lucky I had a good college (Fr. Agnel College, Mumbai) which supported me with my academics and helped me balance my sports and academics.

I am a central midfielder and I play different roles according to how my coach needs me to play. I would rather not compare myself to any player.

Playing in Hero ISL is many young footballers dream of now, and playing the ISL demands the application of a lot of improvisations from players. Have you been working on any particular training or variation lately?

This lockdown allowed me to work on my weak areas and I have been trying to do my best to improve them. I have been working on my mental as well as physical strength.

My top 3 matches would be:

1. Maharashtra vs Punjab semifinals of the Khelo India Youth Games where we lost 3-1 but it was a great game and I enjoyed being a part of it.

3. The third one would be the finals of the state-level DSO tournament.  We won the match 1-0 and I am really glad to be a part of that match.

I am just working hard and hoping for the best, I want to one day represent India at the international level.

Which is your favourite club?

Do you have any pre-game superstitions?

I always call my dad before every game