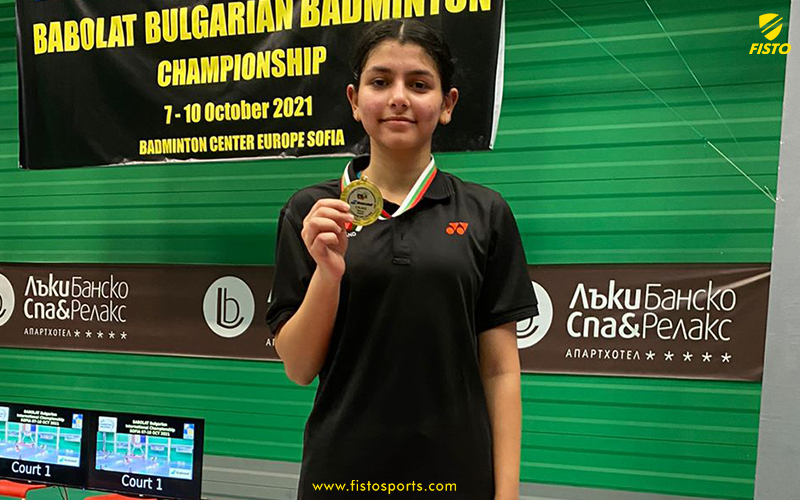 Life never runs in straight lines, in badminton, even less so. There are many chapters in every career, and for Samiya Imad Farooqui, a new chapter has just begun.

After successfully recovered from a traumatic long-standing injury, Samiya is now back and firing on all cylinders.

The 17-year-old shuttler from Hyderabad recently won a silver medal at Polish International followed by gold at the Babolat Bulgarian Championships after coming back from a tough lower-back injury that kept her side-lined for two years.

Feeling like herself again, being back on the court and full-fledged training. In many ways, Samiya will now work her way up to the top-100 rankings.

She said: “It felt good to win medals in my first two tournaments after a 2-year break from the circuit, I was very tensed and had a doubt in my mind if I would be able to perform or not but luckily, I was able to perform well. It helped to boost up my confidence and prepare me for bigger tournaments.

The mental strain of what Samiya had to go through with her lower-injury cannot be understated. Left without being able to train for two years took its toll on the NIOS student, who is appearing for the 12th Boards.

Looking back outlining her injury, recovery process and the challenges, the youngster said, “I had injured my lower back where I had a slight bulge in my L4 and L5 which I had gotten while lifting heavy weights.”

“Injuries are always a tough part of the game and for me, I had to be off the court for about three months which was arduously gruelling especially knowing that I will have to work twice harder to get back in form but thanks to my coaches and physio who helped me both mentally and physically to get back on court faster and stronger.”

The COVID-stricken last two years has been an alien experience for most. However, for Samiya, it just prolonged a painful two years out but this hasn’t stopped her being positive in her analysis of the time spent isolating with family.

“It’s been a year of shifting parameters and perspectives for me.”

“COVID-19 has definitely affected all of us especially the athletes around the world including me, taking a 2-year break was not easy and just staying at with no motivation to stay fit made my body a little weak.”

“But with the negatives there comes the positives too.”

“I got to spend a lot of quality time with my family which also helped me stay lightheaded and not think too much about what’s going to happen next.”

On the backing of Welspun Group

Off the field, Samiya has been supported by Welspun group through Welspun Super Sport Women Program for the past two years. The Hyderabad shuttler recognises the magnitude of the opportunity which has been afforded to her.

“When you know you have the backing of big Corporates like Welspun foundation behind you, it gives you that extra confidence that someone believes in you and that definitely motivates a sportsperson to work harder towards their goals.”

“Now that we are stepping up to the senior level and going for various tournaments, I can put more focus on my game knowing that the Welspun Super Sport Women program will take care of my needs.”

The Welspun program has helped not only with travel and tournaments, but also encourages her in finding good physios and trainers as per her need.

“I really appreciate all the help and encouragement that I am receiving from the program, and I hope I can pay back to the trust they have shown on me by winning more medals for the country.”

Chasing glory comes at a price

In a time of restrictions, Samiya has shown that nobody should be restricted to what they can achieve. If you have a dream then go out and get it.

Samiya, who's intelligence, speed of play and speed of movement with composure and combative approach being already highly touted, has been training at Pullela Gopichand Badminton Academy. She believes that chasing glory comes at a price and that price was hard work.

When asked about her current title ambitions and long-term goals, Samiya said:

“Right now, my aim is to get into the top 100 in the BWF World Rankings by the end of the year and start playing bigger tournaments which includes all the Super Series, and my ultimate aim is to win a gold medal for India at the Olympics.”

Every story has a beginning, a middle and an end. Samiya will now enter that middle stage. She is only 17 years old, still learning, ever-improving and we have many chapters remaining. In a thriving sport, Samiya is a potential new star.