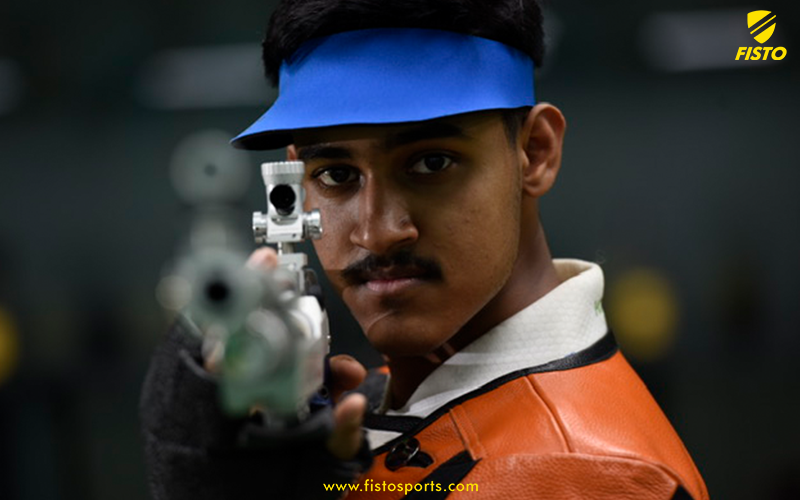 India have always been a nation that prides itself on producing talented young shooters. If current evidence is anything to go by, with their impressive international performances – the Indian young shooting talents continue to play the role of upstart much to their delight. Though players such as Saurabh Chaudhary are getting much of the attention, Air Rifle Shooter Shahu Tushar Mane is undoubtedly a shooter to keep a keen eye on over the next few years.

At age 15, Shahu Mane realized her passion and talents for shooting and has been fortunate to be picked by coach Suma Shirur to be trained to become a professional shooter. He has worked his way through the age groups, impressing at every step.

He appeared at his first gold at the 2017 National Youth Championship event at the age of 15 and finished at the top at International Selection Trials presented the opportunity to compete at the Asian Shooting Championship debut a year later. Then he hit the big time at the Youth Olympic Games 2018, where he won a Bronze medal in 10m Air Rifle Men’s event.

With over 40 medals under his belt, including a silver medal in 3rd Youth Olympic Games 2018 at Buenos Aires, Argentina, two medals in Asian Air gun Championship, Saitama Wako, team gold medal at the ISSF Junior World Cup, Suhl, Germany, plus numerous national and state championship titles, Shahu Mane has established himself as one of the burgeoning shooting talents in the country.

If there’s one thing the 18-year-old has shown himself to be good at, it’s learning. Shahu Mane has made good progress already in his young career, so much so that he admits to even surprising himself at times. It helps too that he has been surrounded by talented friends and team-mates.

The mind of Shahu, is certainly his best attribute. He is also mature and composed when on the action. He possesses excellent aiming, and an accurate range of sight picture, but he will look reflectively and know that despite his whirlwind work so far, there’s definitely still more to be done to make him more of a complete athlete as he develops.

You are very young and have quite a few medals under your belt, and I am sure it must have been a quite whirlwind journey, so tell us about how did you first get into shooting? What are your first memories about the time when you knew this would be something you pursued?

I have always been passionate about sports and I started shooting in Kolhapur at a summer camp, at the age of 13. The coach got a hint of proficiency after I won a match conducted at the camp. Having developed an interest, I decided on pursuing the sport. I love how shooting gave me a sense of belongingness, apart from bringing out the fun of competition, which I cherish a lot.

At what point did it sink in that you could be really good at rifle shooting?

After winning the team gold of School National Games organized by the School Games Federation of India in Indore, it dawned upon me that shooting is something I could excel at.

Who were your shooting idols when you first became interested in the sport? What was is about their character or achievements that you admired?

Suma Shirur ma'am, who also happens to be my coach is my idol. I really admire how she and shooters of her generation won at the highest pinnacles of international shooting in times when athletes were not superfluously supported as they are of now.

What was your first medal in any form of shooting?

I won the gold at the Inter-School states of 2016.

What shooter did you want to model yourself after when you were growing up?

I have always looked up to my coach Suma Shirur ma'am and have idolised her.

At the age of 18, you have come a long way since winning 2017 national Championships to win a silver medal in Youth Olympics. Tell us a bit about the hard work you put in during the time and who helped you the most in the feat?

Sport is a very taxing endeavour, especially if you are competing at higher levels. The Youth Olympics of 2018 was the biggest opportunity, and it asked for both a huge amount of physical as well as mental strength. I had a severe back injury at the time, which used to hamper my practice sessions as well. Suma ma’am, and my physios, Debashish Das and Jane Lucas helped me overcome some of the darkest times in my life.

How instrumental Suma Shirur was in your shooting career?

Suma ma'am has been very prominent support, throughout my shooting years. Mere words cannot describe how instrumental she has been.

What’s the toughest aspect of being a champion shooter and what do you enjoy the most about it?

The toughest aspect will be that of performing consistently, and the aspect I enjoy the most is of getting the opportunity to compete with the best of the best.

I travel solo now, though prior to competitions my parents have always been extremely supportive of me, and have put in the efforts of creating a conducive environment for me before a match.

How do you cope with the high pressure in competitions?

I cope with high pressure in competitions by motivating myself, having optimistic self-talk, and remind myself of my level of proficiency as well as preparation prior to a game.

What sacrifices did you find the hardest in order to pursue your shooting career, and would you say that shooting has changed you as a person?

I had to sacrifice my school life and give up a layman's lifestyle. Yes, shooting has changed me a lot as a person.

You must have competed alongside some good names already, who would be your ultimate competitor?

I love competing against Kiran Jadhav, a good friend and a fellow international shooter.

Competing at such a young age, how did you juggle studies with sport? How’s your school/college towards your sporting career?

I get a minimal amount of time to prepare for exams, so I make the best out of it. My school back in Kolhapur, St. Xavier's High School has always been very supportive of me.

What else do you do? Is there something else that you do that you like to perfect outside of shooting?

If you could shoot with any celebrity, who would that be and why?

I would like to shoot with Jason Statham. He portrayed proficiency with guns in Fast & Furious series.

What comments do you get from people/friends/family when you meet them with your shooting kits/tools?

They mostly have questions about how the weapon works.

To this point, what's been your best moment or favourite moment in shooting? What’s the one thing that you are most proud of?

Meeting Abhinav Bindra sir after the Youth Olympics was my favourite moment of shooting. I have been proud of getting the opportunity of singing the National Anthem on the fora of International competitions and I plan on relieving it again and again.

What are your future plans as far as shooting goes?

I plan on to win an Olympic medal.

One fellow Indian shooter of your age you admire?

If you could only pick one cartridge for all your shooting needs, what cartridge would it be and why?

R10, because the top shooters recommend the same.

Best compliment you have received

The best compliment I received was when Suma ma'am called me a pure soul.

What’s something that a ton of people are obsessed with but you don’t get the point of?

Many people are obsessed with solely winning at a game, but I do think that enjoying the sport is equally important.