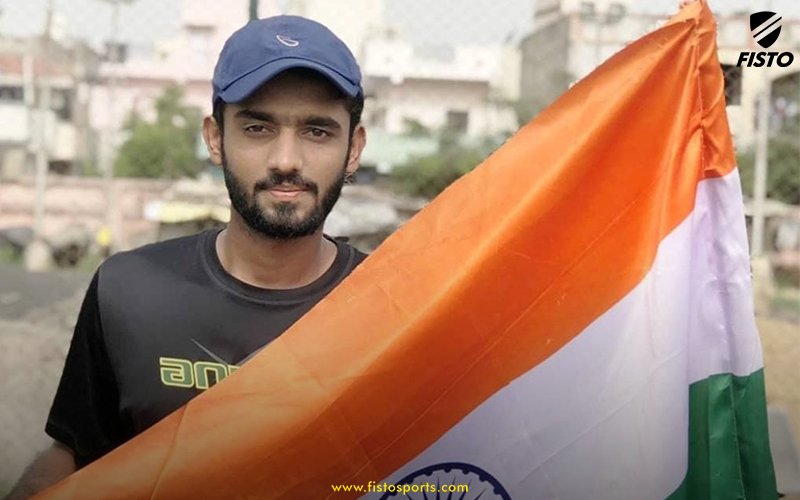 Following consistent impressive performances over the years, Rohit Dhiman has established himself as one of the best soft tennis players in the country.

With the likes of Badminton, Kabaddi already on the rise, there is this sport which might be not synonymous among the sports freaks but has the potential to see a rapid growth in the coming years. Soft Tennis – As the name suggests, it is played with a softer rubber ball and a lighter racket than are used in the regular game. It is said to allow for longer rallies as the racket and ball make it harder for players to dominate with single powerful strokes. It is seen as more unisex than the regular game and mixed doubles have become popular.

With over numerous titles under his belt, including six gold medals, two silver and a bronze medal in senior nationals, medals in All India University, plus multiple international participations such as Asian Games, Asian Championship and World Championship, Rohit Dhiman has proven a remarkable consistency in the recent years and well truly established himself as one of the best soft tennis in the country.

His personality and mental attributes are also among his key strengths.  Having had to overcome such personal hardships off the field has moulded him into a determined, resolute and mature individual, something that comes across in the way he plays the game.

On an international level, having already represented India at various levels, the expectation will be that Rohit continues his trajectory to become a cornerstone of the soft tennis in years to come. Though the 23-year-old won the domestic competitions with less difficulty, the international circuit proved to be his stumbling block.

At present, Rohit’s main focus will be on winning a medal at the 2022 Asian Games.

With the greatest of respect, soft tennis is not a sport that most youngsters grow up hoping to represent their country in. How did you first get into soft tennis? What are your first memories about the time when you knew this would be something you pursued?

After sometimes, I came back to soft tennis as I had not won many but learned a lot. After a few years, I started getting good results in the juniors national of soft tennis. That is how it’s all started. Years passed, I fell in love with the sport and I never looked back.

Who were your sports idols when you first became interested in the sport? What was is about their character or achievements that you admired?

At my first international in South Korea, I have seen Korean players who are striking the ball with full energy, flair and consistency. I chose my favourite player there whose name is Kim Dong-hoon of South Korea who have won the medals in Asian games 2014, 2018 and World Championship too.

The real strength for me in my game is my mind and consistency. I have known as one of the most consistent players in my sport.

Are you good in your studies as well? If yes, how do you able to manage sports and studies? How supportive your school/college has been….

Through making time for things. Honestly, I just don’t let things be an excuse. I am average in studies. I am pursuing my law degree which is not easy. You need a good time to study law, but I used to practice at late evenings from 8 to 9 pm or 9 to 10, so, there’s a set time to do homework, to go to university, to train, or to spend time with my family and friends. Soft tennis also helps because I can jump back to life whenever I finish training. It’s rejuvenating, basically.

My parents have always been a big support for me. From the beginning, I got the best financial support from my parents.

Which has been 2 standout moments in your soft tennis career that have made you feel on top of the world?

The best in soft tennis was when I represented our nation in the Asian Games and in the last 3 year in India, I have been the more consistent player.

Yes, it is important to have a favourite shot because you are always comfortable in playing that shot and you feel more confident while playing it. My favourite shot is my cross court backhand which helps me to take the opponent outside the court and gives me the opportunity to end the point.

Many players have routines, habits and superstitions when the travel and play. Do you have any individual quirky things you do before a game or special item you carry with you in your bag that must go with you everywhere?

Yes, many players have the routines of habits and I have too. I used to make my body warm before the match. I used to do long rallies skipping, short sprints and in my bag, I always have a bottle of water with one energy drink and 1 banana and some spare t-shirts.

How do you assess and see the potential of Soft Tennis in India?

Soft Tennis has a lot of potential, but so far very few people have ever seen or heard about it. Hopefully, that will change soon.

What are your plans and goals for your life in soft tennis? How do you see your future in the sport? Do you plan to stay involved in soft tennis for many years?

My plans with soft tennis are to represent the country in 2022 Asian Games and win an individual medal. And yes, I want to be able to stay active and train soft tennis for the rest of my life. I want to remain a student always learn because the one thing soft tennis teaches you is to always better yourself and continue to grow. In my life, it helps me relieve stress and stay focused and have a clear mind about life.

During my first tournament.